AMD and Intel are locked in an ongoing battle that ends only when one company shutters. Fortunately for us in the stands, neither has any intention of ceding much ground to the other. The result is a never-ending succession of top-notch, affordable CPUs. The release of AMD's Ryzen 6000 mobile processors continues this saga, with the Ryzen 9 6900HS firing a shot directly across Intel's bow.

You'll find this chip in thin, lightweight laptops, with far less sacrifice in performance than you might expect when compared to Intel's beefier flagship mobile CPU. Our comprehensive review of the 6900HS gives the complete lowdown, but if you don't have time for every last detail, here are five key takeaways.

1. Lots of power in a small package

At first glance, the benchmarks for the Ryzen 9 6900HS may appear to show Intel trouncing AMD's best. Despite surpassing its predecessors in nearly every test, the 6900HS is still eclipsed by the Intel Core i9-12900HK. The 12900HK hangs onto the top spot across rendering, encoding, productivity, and creative tasks. However, the comparison between it and the 6900HS isn't a true apples-to-apples comparison.

What you're actually looking at is a comparison of Intel's flagship mobile chip against the best of AMD's available silicon. Intel focused on its hardest-hitting chips for the launch of its 12th-generation Alder Lake mobile processors. The kind of laptops in which you'll find it and other Intel H-class CPUs are beastly and often weighing in at five or six pounds (or more). 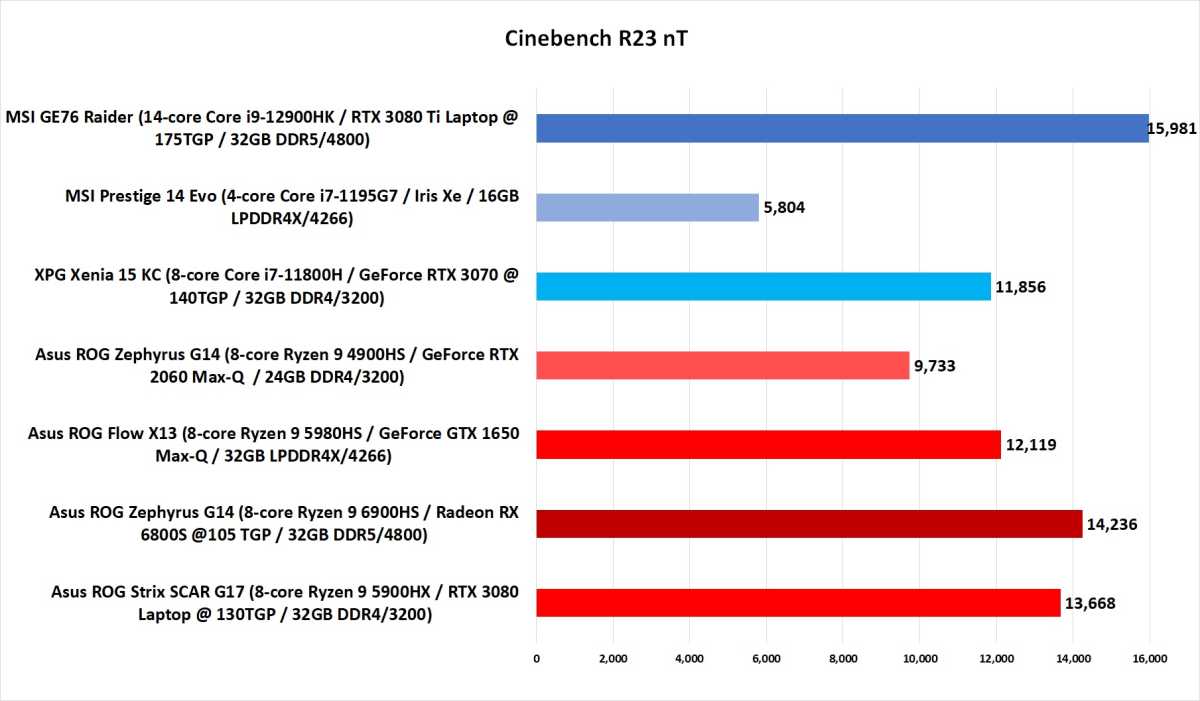 This Cinebench R23 benchmark is a sample of the trend you'll see in our full suite of benchmarks, though individual results vary. For this chart, longer bars indicates better performance. 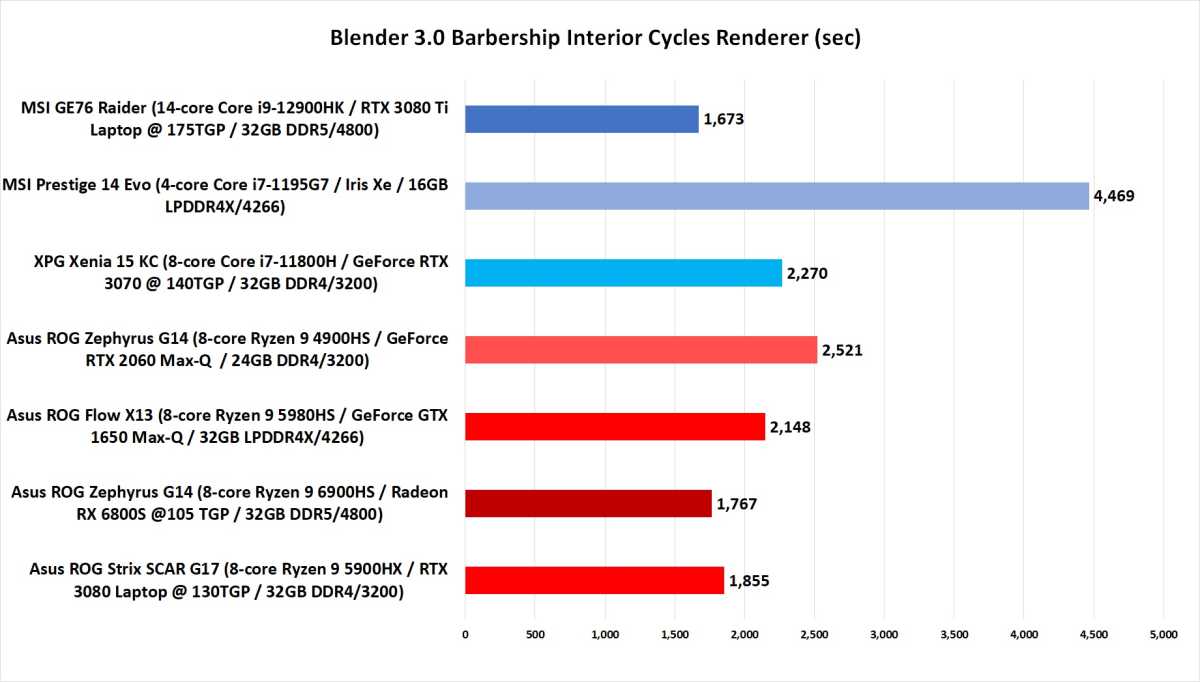 This Blender 3.0 benchmark is a sample of the trend you'll see in our full suite of benchmarks, though individual results vary. For this chart, shorter bars indicate better performance. Image: IDG

For the release of Ryzen 6000, AMD wants our attention on a chip designed for thinner, lighter laptops (usually around three to four pounds). The 6900HS isn't the top of the stack—that distinction goes to the Ryzen 9 6980HX, which is still to come. That processor runs faster and consumes more power, similar to the Core i9-12900HK. Instead, the 6900HS is a few rungs down, with a bit shaved off its clock speed and a more efficient 35 watt TDP. (You can read more about the full stack of processors in our deep dive on Ryzen 6000.) 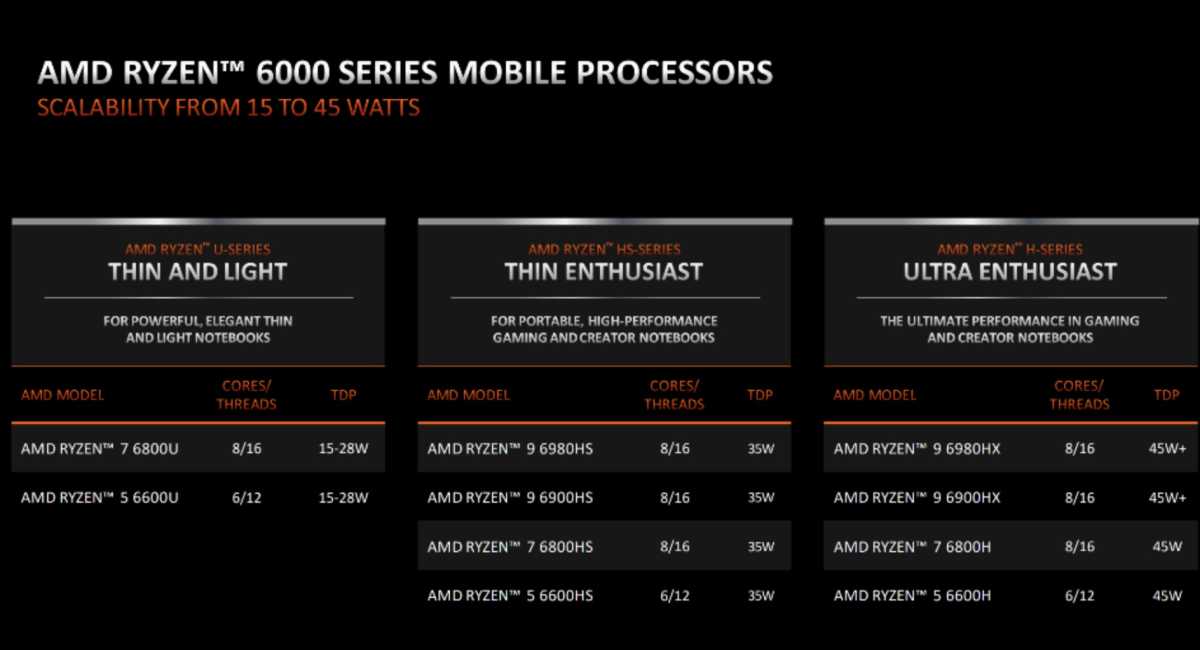 AMD's flagship H-class processors, which include the 6980HX and 6900HX, will begin launching in March. Image: AMD

The fact that the 6900HS is posting numbers within 10 percent of the 12900HK (and sometimes even closer) is damn impressive. You're seeing a premium 3.6-pound gaming laptop perform not far off from a 6.4-pound competitor that has the luxury of more room. That size difference is important, because the less space you have in a laptop, the more performance must be balanced with heat concerns. It's notable that AMD's chip comes this close to its biggest rival despite being confined to a laptop almost half the weight.

The short of it is that for anyone who travels light, you're not making a big performance sacrifice to shuck pounds from your bag.

2. Speed upgrades across the board (hello at last, PCIe 4.0)

The 6900HS may have all the attention right now, but platform upgrades have arrived alongside it. When you consider a laptop with a Ryzen 6000 series chip versus one from a previous gen, you're not just weighing a boost in CPU performance, but also support for PCIe 4.0, USB 4, DDR5 memory, Wi-Fi 6e, and Bluetooth Low Energy 5.2. This tech will speed up your laptop experience across the board.

PCIe 4.0 arguably has the most impact on day-to-day performance. AMD keeps support at eight lanes, or the same number as for PCIe 3 with previous gens. That move doubles the bandwidth for the GPU connection. Another 12 lanes have been added for storage and other general uses, too. Paired with DDR5 memory up to 4,800 megatransfers per second (or low-power LPDDR5 memory up to 6,400 MT/s), Ryzen 6000 systems should feel pretty zippy. 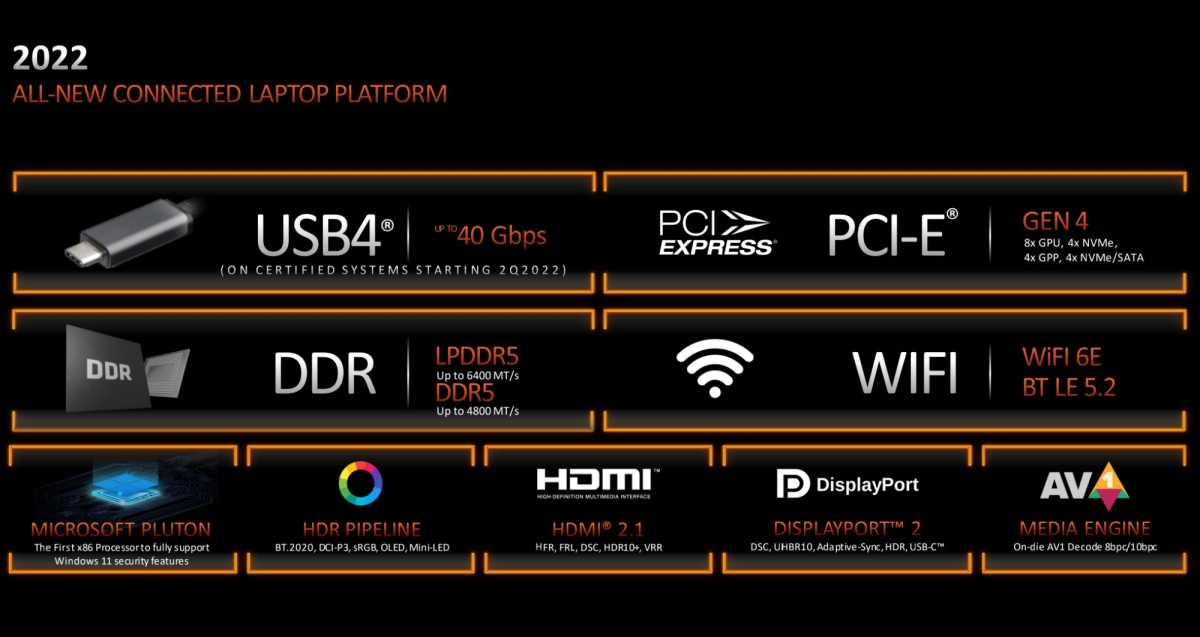 USB 4 ports will close the gap between AMD and Intel, with the latter having had the advantage of Thunderbolt 3 and Thunderbolt 4 for external data transfers. USB 4 incorporates and builds upon Thunderbolt 3, with up to 40Gbps transfer speed, and also supports DisplayPort 2 and charging.

Rounding out the line-up is Wi-Fi 6e, with its cutting-edge wireless speeds—handy if you live in an area that's rolling out ultra-fast fiber connections.

But that's not all. Beyond the platform upgrades that AMD rightfully boasts about, the Ryzen 9 6900HS and other Ryzen 6000 chips will support Pluton, Microsoft's new security chip, as well as feature improvements to AMD's SmartShift technology. SmartShift dynamically adjusts the amount of power fed to the CPU and GPU depending on the needs of each. For Ryzen 6000, SmartShift Max will help to coax higher raw performance, while SmartShift Eco will work to ensure better battery life. Separately, Smart Access Graphics performs similar management between use of integrated graphics and a discrete GPU in relevant laptops. You can read more about SmartShift and Smart Access Graphics in our initial overview of Ryzen 6000, but basically, they should provide nuanced but tangible boosts to overall laptop performance.

3. Creatives and spreadsheet warriors may want a different chip

The Ryzen 9 6900HS makes a damn fine case for choosing AMD over Intel, especially given how powerful the chip is. For most people, it supercharges what you can expect from a thin, lightweight gaming laptop.

But as mentioned above, the Intel Core i9-12900HK does hold a lead over it in benchmark results. Individuals who can't compromise on performance—typically professionals with intense computing demands—will want to scrutinize the test results, especially if you lean on one or two specific Adobe Creative Cloud applications. In programs like Premiere Pro and even Lightroom, the 12900HK has enough of an edge to save you tangible time. In Photoshop, the difference is slimmer. 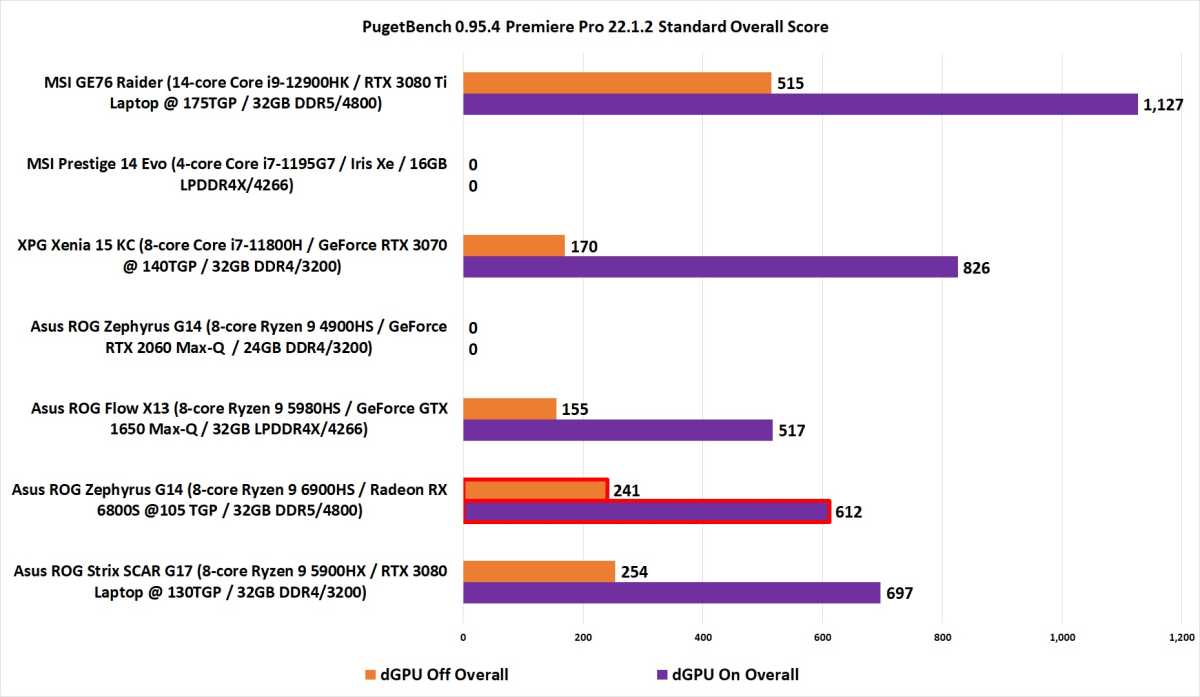 The 6900HS gives up a lot of ground to the 12900HK in some Adobe Creative Cloud applications, as you'll see in our full suite of benchmarks. For this chart, longer bars indicates better performance. Image: IDG. 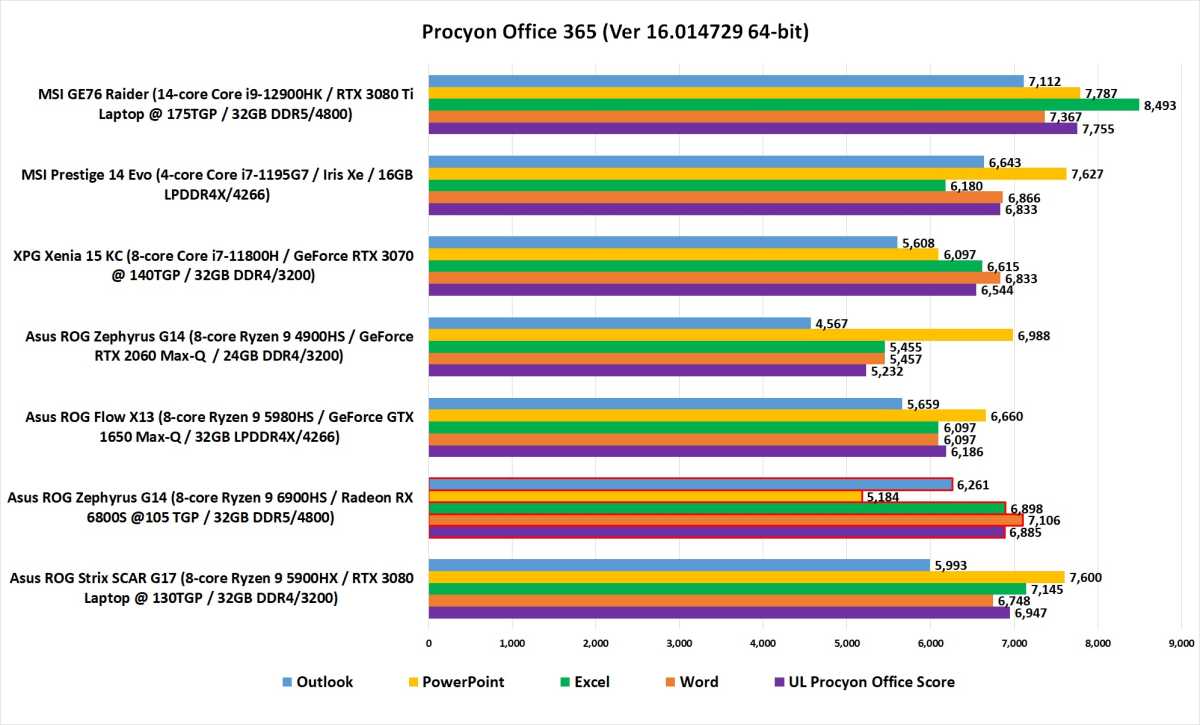 The 6900HS also gives up ground to the 12900HK in some Microsoft Office 365 applications, as you'll see in our full suite of benchmarks. For this chart, longer bars indicates better performance. Image: IDG

But even those who push Office applications to their limits should pay attention. Do you often sling slides in PowerPoint? The 6900HS's wonky results might give you pause. The same applies to anyone who crunches major numbers in Excel.

Again, most people don't fall into these camps. But if you do, Intel 12th-gen H-class chips may be better for you in the here and now. You can also wait for Intel's equivalents to AMD Ryzen HS processors to hit shelves—or conversely, AMD's beefier Ryzen 9 6980HX and 6900HX, which launch next month. With time, you'll clearly see which chips hit the hardest in the form factor you favor.

One clear win for AMD is the RDNA 2-based integrated graphics inside Ryzen 6000 mobile processors. It's the same technology in AMD's current line-up of Radeon RX 6000 series graphics cards, and you can clearly see its supercharging effect. When pitted against the IGP in the Core i9 12900HK, the 6900HS came in a whopping 33 percent faster. 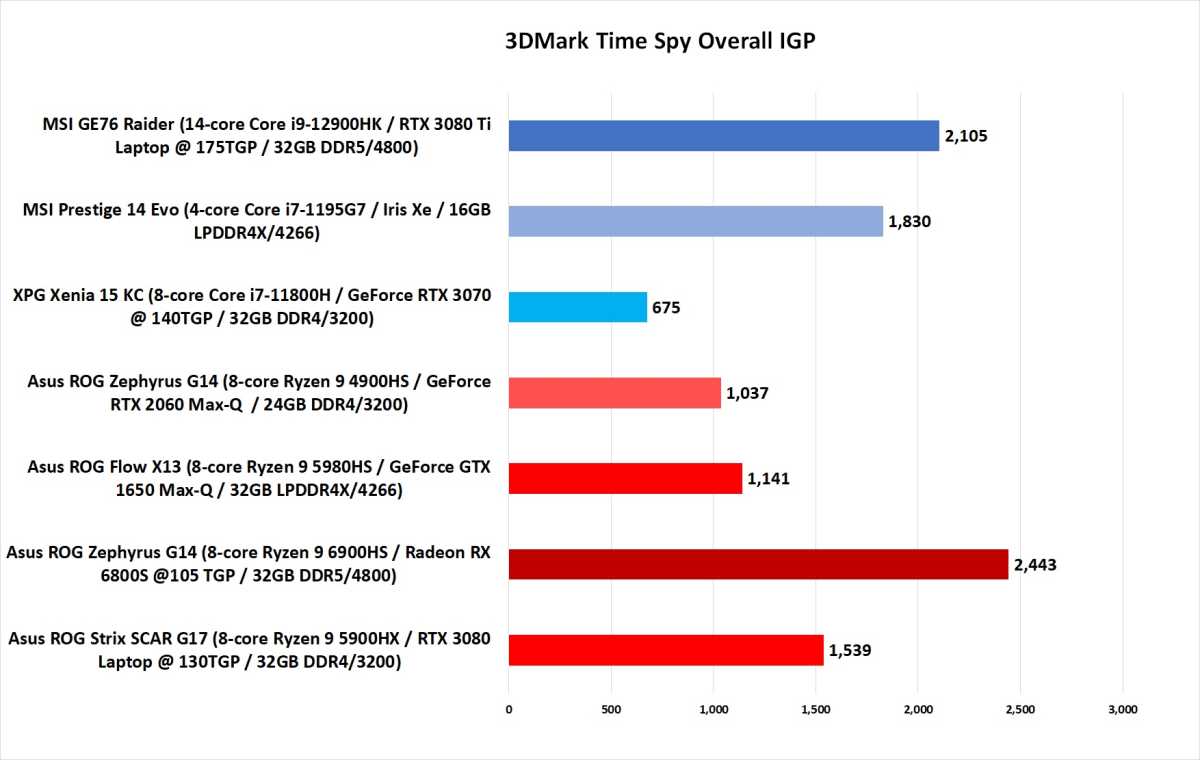 That might not mean much to someone buying a 6900HS, as this high-end chip will almost always be paired with discrete graphics. But for someone looking at budget laptops, this level of performance is huge. A notebook with no discrete graphics would still be capable of running games at 720p at higher graphics settings, or 1080p at low settings, depending on the title. You could buy a productivity laptop and play games directly on it—you're not purely reliant on cloud gaming services like GeForce Now or Xbox Cloud Gaming.

5. No surprises with battery life—for now

Comparing battery life across different laptops is tricky, even when they have the same processor. Factors beyond just the two obvious power guzzlers (the CPU and GPU) influence how long you can go on a single charge. For example, the size of your battery and your display's power consumption have direct impact as well.

That said, battery benchmarks still are important—they reveal chips that have a notable effect on runtime. You can weed out ones that might bleed faster than is tolerable. 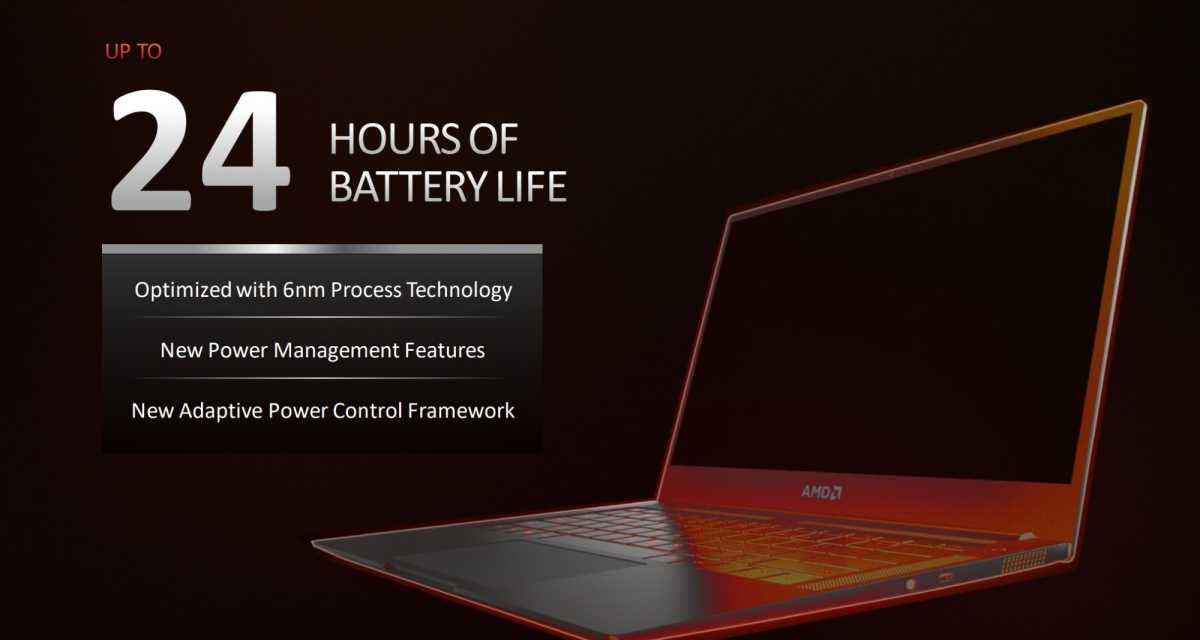 Ryzen 6000 CPUs include lower-wattage U-class chips that are likely the basis for this battery life claim. Image: AMD.

Fortunately, we found no issues with the 6900HS. In our video rundown test, its battery kept pace with its three Intel rivals and its Ryzen predecessors. The numbers aren't mind-blowing, with our Asus review unit stopping at the six-hour mark, but it's a respectable number given the laptop's discrete graphics.

Prior to launch AMD did make claims about better power efficiency, however. Team Red claimed up to 24 hours of video playback, or a three-hour improvement over Ryzen 5000 mobile chips. (You can read more about those claims in our initial overview of Ryzen 6000 following its announcement at CES.) Our video test is just skimming the surface—we still have more testing to do to put AMD's chip to the test. But for now know that you're at least getting real-world performance that's still at the top of the game.

Read more: Forgot your Fitbit tracker at home? Here’s how to make your steps still count