If you're a PC gamer, there's one application you absolutely should have on your hard drive: GOG Galaxy 2.0, the best way to organize your games. All your games.

There are at least seven major online game stores out there, all competing feverishly to win your credit card. Epic throws free games at you every week. Steam holds periodic sales, where top-tier games are heavily discounted. And Microsoft's Xbox Game Pass for PC offers dozens of free games for you to play, all for a few dollars per month. Finding cheap or free games to play is ridiculously easy.

Keeping track of those games, however, is another matter entirely. In most cases, each online game store provides its own application to buy, download, and authenticate games, and any game you've downloaded is kept in that store's digital library. Remembering which games you've purchased or downloaded from each store means checking them all individually. Who has time for that? Most players probably just choose one or two stores and ignore the rest. And if you do, you're missing out.

GOG Galaxy 2.0 changes all that. It's the uber-store, an app that connects to all of the other stores and allows you to pool all of your owned games into a single, collective space. Want to play Far Cry 3? You don't have to wonder whether the game is on Steam, or Ubisoft, or whether you picked it up from another store. Simply click the title icon and start playing.

To be fair, GOG Galaxy 2.0 isn't a new invention. We tested GOG Galaxy 2.0 in 2019 as GOG's online storefront was just taking shape. But after a year or three of polishing and refinement, it's become my go-to application for organizing all of my online games. I would say that I rarely buy games—and yet I've somehow amassed access to over 650 games that I can play whenever I want. Who knew? 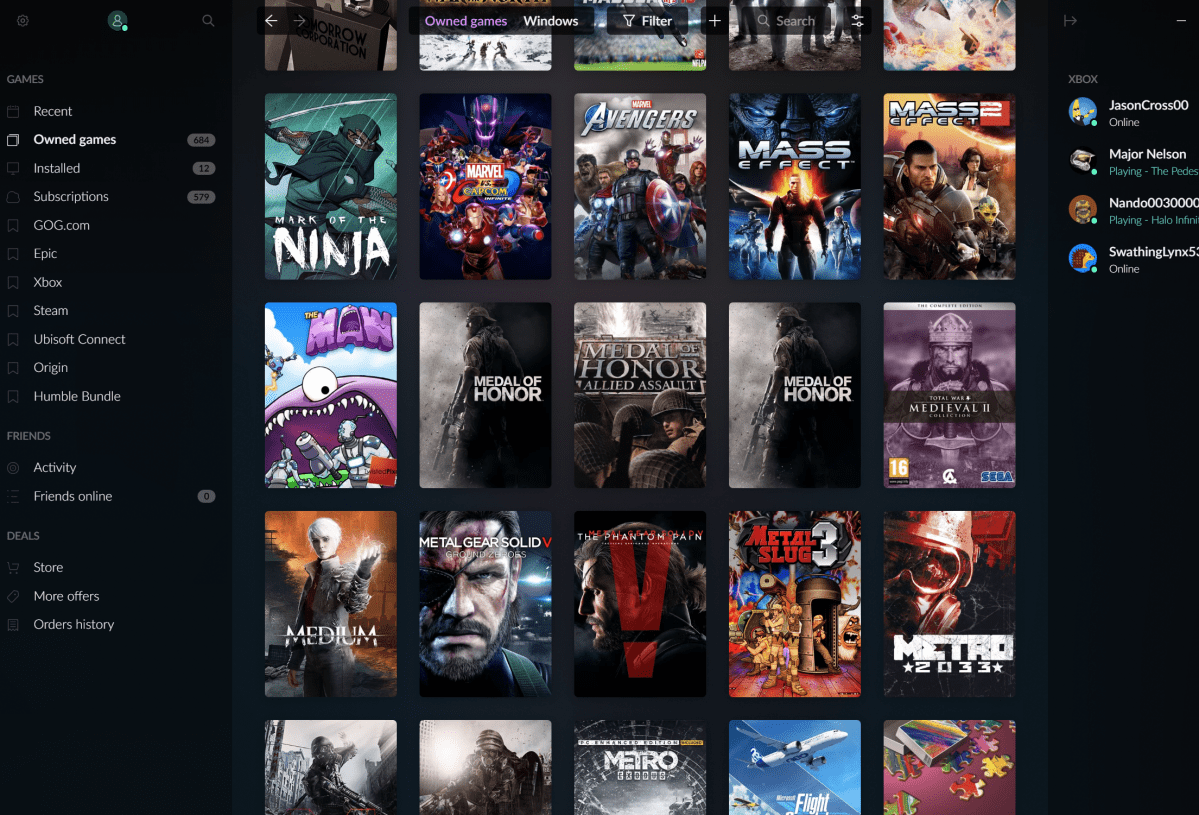 You could put app shortcuts for all of these in your Start menu, but that would get unwieldy fast. (Plus, Windows 11 lacks robust folder support in the Start menu.) Storing them all within an app like GOG Galaxy 2.0 works very well.

All your games in one place

The magic of GOG Galaxy 2.0 is how it integrates the various storefronts into its own unified interface. Officially, GOG Galaxy 2.0 supports only three online stores: its own GOG.com store, the Epic Games Store (new for January 2022), and Xbox Live and its Game Pass Ultimate subscription. Clicking the Settings gear in the upper right-hand corner, and then navigating to Add games friendsConnect gaming accounts, allows you to connect to each game store. That store will then show you its login interface and authentication method. Once confirmed, GOG Galaxy 2.0 will connect to the store and start importing games, populating the app's main page.

But it doesn't stop there. Community members have adapted GOG's SDK to support other stores as well, several of which are included by default in the main GOG Galaxy 2.0 client: Amazon Games, Bethesda, Steam, Ubisoft, Origin, and more. Clicking the Settings gear in the upper right-hand corner, and then navigating to Add games friendsConnect gaming accounts allows you to add even more, through an automated GitHub search conducted on the back end. Adding games purchased through Humble's store, for example, is as simple as typing Humble into the search box under Community Integrations. 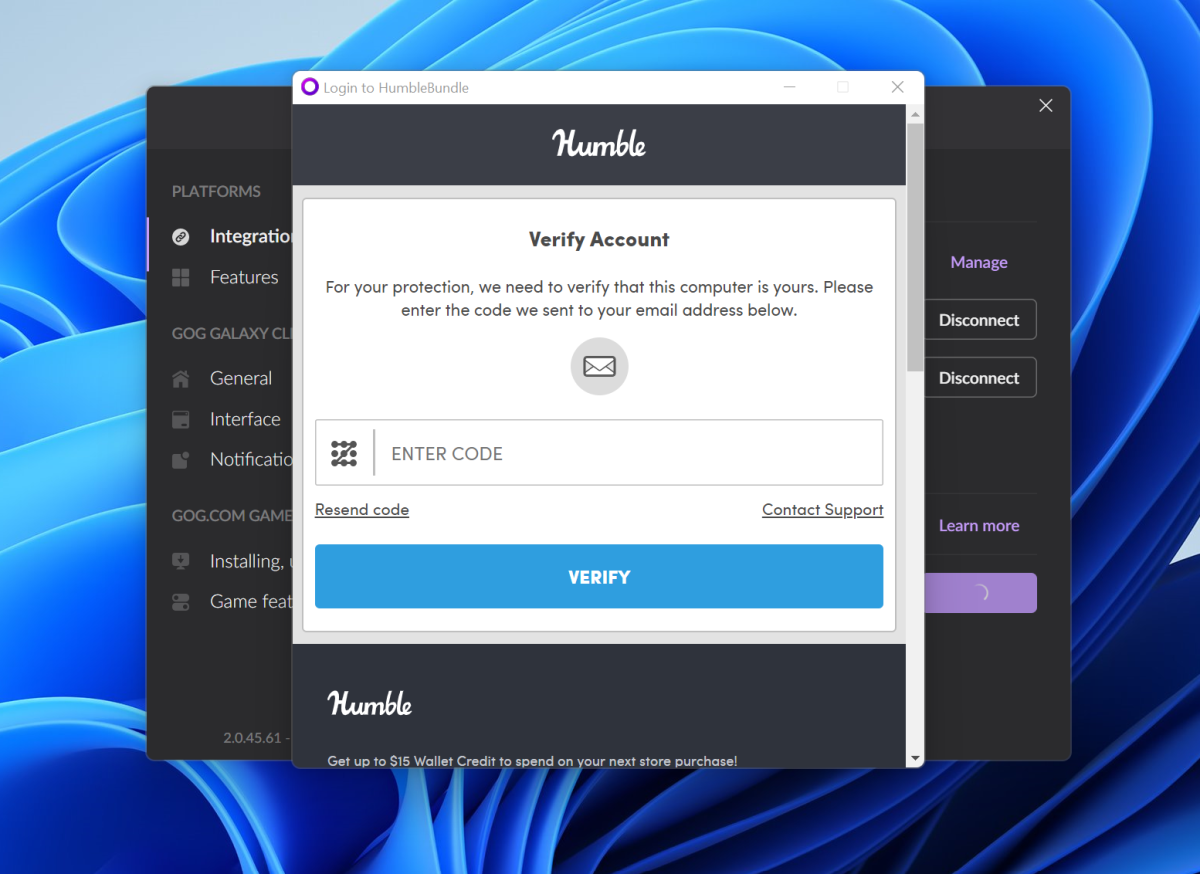 At this point, GOG Galaxy 2.0 nails its basic goal to provide a single unified interface for all of your games. You can quickly click and filter any games you outright own, or have installed, or are available to you via subscription. Hovering your cursor over each icon will reveal its name (which should be obvious) as well as the store on which it's found. GOG also assigns separate icons for different versions of the game—such as a Game of the Year edition, in addition to the base game. You can also scan your PC for games that may not show up in a store, or simply manually add an executable file, too. (You'd only typically do this for extremely old games that haven't been remastered, such as classic Looking Glass games like Terra Nova: Strike Force Centauri.)

In certain cases, you may find you own two copies of the same game via different stores: Europa Universalis IV is available to me via the Epic Games Store as well as the Xbox Game Pass subscription. You can choose to download from either store, though GOG hides this choice on the individual game page.

GOG's Galaxy app does a fairly thorough job here, as well. Clicking a game's icon from the main library of games opens up a separate page, summarizing the game, highlighting review scores, and so on. Because the integration with each game store varies (and some game stores provide features others do not), the richest pages are those connected to GOG's official stores, such as Microsoft's Xbox Game Store. Here you'll find a detailed list of achievements, the amount of time you've played the game (gulp!), and how you rank among your friends who also play the game. 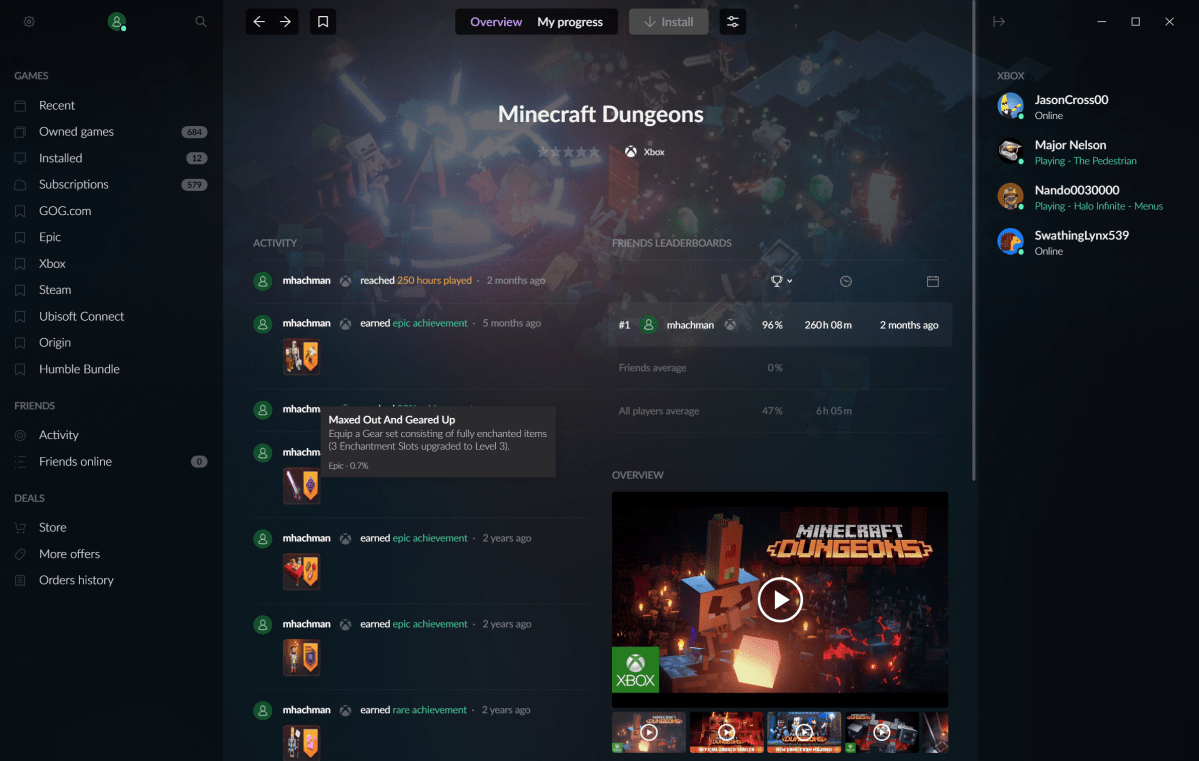 GOG Galaxy 2.0 does have a ways to go in some respects. I personally don't seek out friends to play with, but it's not always clear what friends are online. I might see four friends playing Microsoft Xbox PC games on the right-hand nav bar, such as in the screenshot above. The left-hand nav bar, however, will report that zero friends are online. But the biggest flaw, in my mind, is that GOG Galaxy 2.0 doesn't report how large a game is before you download it—not everyone pays for unlimited bandwidth or strikes deals to eliminate those caps.

Finally, GOG Galaxy naturally promotes GOG's own sales or deals, so you'll have to check Epic periodically for its weekly free game or browse Steam for its own game sales. (If that bothers you, or the fact that GOG Galaxy is owned by a store, you can check out PlayNite, an open-source alternative that offers many of the same features.) 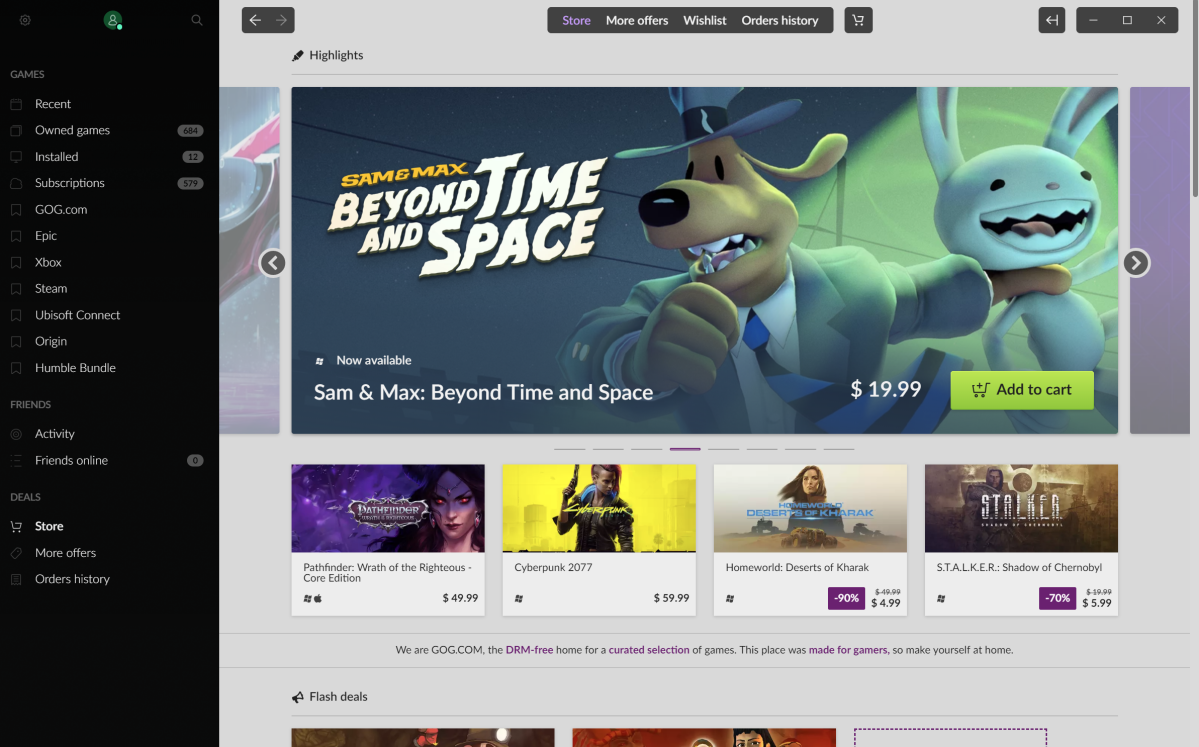 GOG's app naturally links to its own store.

There are also certain things that GOG can do nothing about, for now. You'll still need to download the various authentication / storefront apps, such as Steam or the Epic Games Store, and leave them running if you want to play a game from that store. Certain stores don't allow achievements to be tracked. GOG Galaxy 2.0 also can't update your games automatically for you—though those other store apps can. GOG Galaxy also doesn't yet connect to community-developed mods or DLC, such as the Steam Workshop—if you play games like Planet Coaster, for example, you'll need to go through Steam for community-designed rides and props.

For me, those are forgivable offenses. Just seeing all of my games in one space—and being reminded of games I had totally forgotten about—is worth it.