Desktop machines might take home the prize in absolute raw power, but most users are still going with laptops for practicality and ease of use. So the new 12th-gen Alder Lake Intel processors, now freshly available in portable form, are a welcome upgrade for those who need their premium processing in a to-go package.

PCWorld's Gordon Ung took care of our usual exhaustive review of the new generation of Alder Lake chips, starting with the absolute top-of-the-line Core i9-12900HK. He compared it to both AMD's latest and greatest, the Ryzen 9 5900HX, and Intel's last-gen Tiger Lake Core i9-11980HK.

Because of the nature of pre-built laptops, the tests aren't as perfectly controlled as desktop benchmarks. Even so, we can glean some pretty definitive results based on crunching the numbers. If you don't have time to go through more than 6000 words of scrupulous detail — or maybe you just can't fit it into your lunch break — here are the important points to take away, as we wait for review units to start flowing in to inform our roundup of the best laptops.

Perhaps you could be forgiven for predicting this plot twist beforehand, but Intel's new top-of-the-line chip is faster than its old top-of-the-line chip. But this is no mere iterative bump: The Core i9 Alder Lake CPU beats out Intel's previous best effort by a considerable margin, especially when it comes to intense media applications. 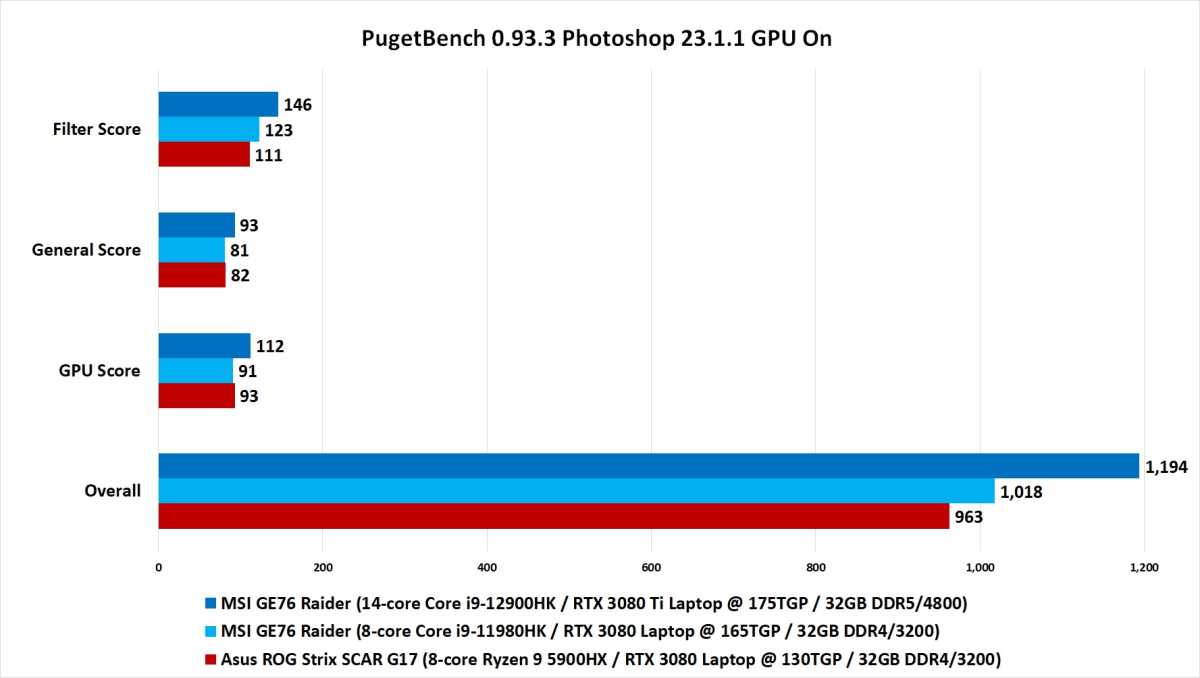 While the comparisons for Adobe suite programs and programs like Blender aren't perfect due to GPU helper systems, they're showing a consistent 10-20 percent improvement over Tiger Lake, especially for more lengthy rendering processes. Taking special notice of the PugetBench Photoshop 23.1.1 test with the laptop's discrete graphics switched off, which eliminates the graphics card variable: While the Core i9-11980HK and Ryzen 9 5900HX machines are in a dead heat, the new Core i9-12900HK laptop beats them both by 18 percent. That's a huge performance boost for a single year. 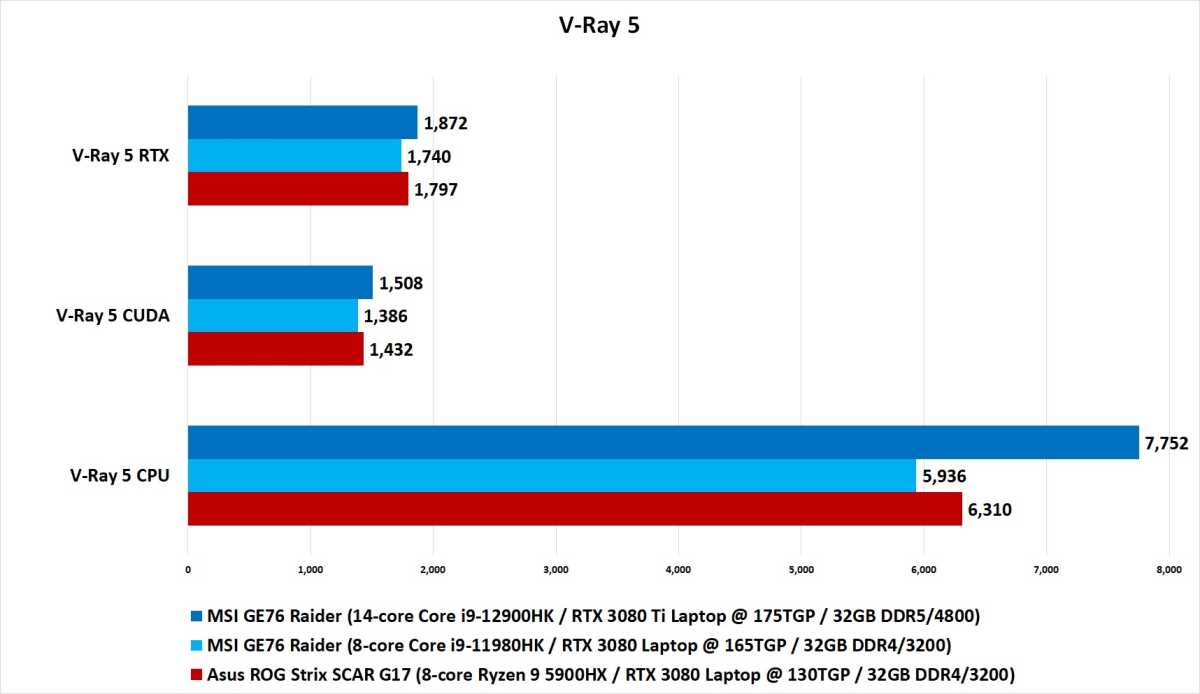 Results are more dramatic on more intensive benchmarks, but the takeaway is that, for the moment at least, Intel is the laptop speed king. That's an important metric for the company, if not anyone else, as marketable (and less-expensive) laptops are one of the areas AMD has been hitting hard and growing quickly over the last few years.

We lack the data to compare all of the down-market chips from Intel and AMD directly. And frankly, the differences become less meaningful as you go down, especially when you're at the level of Core i5/i3 and Ryzen 5/3 CPUs. But for what it's worth, Intel has regained the crown.

New chips have practical gains, too

Turning away from questionably useful brinksmanship, it's worth noting that the Core i9-12900HK does see considerable increases in performance beyond the very niche applications of media rendering. If you're spending your days crunching numners in Excel, you'll see a boost in performance with the new processor. 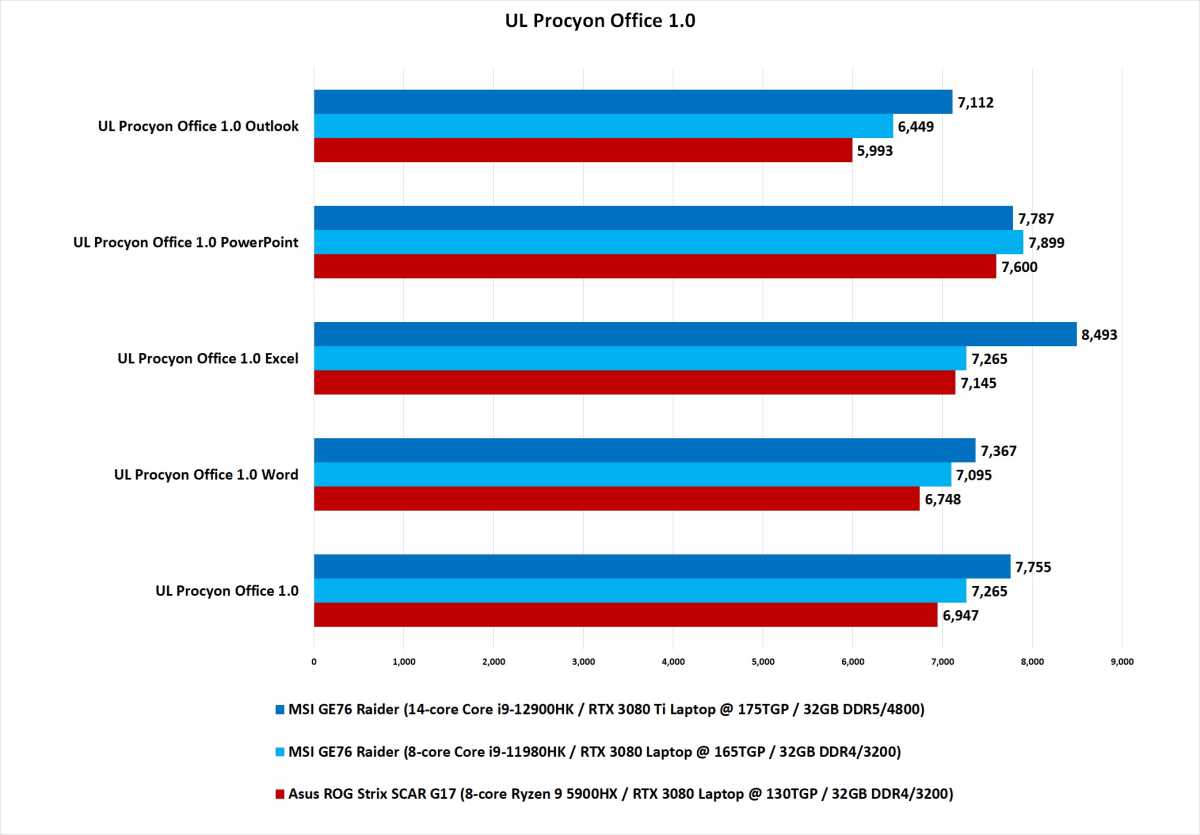 Intel was already beating AMD in this area, but in Procyon tests for most Office applications we can see about a 10 percent boost for the new Core i9-12900HK. That's even more dramatic in Excel. If you live in the browser, you'll see gains as well. In the MotionMark 1.1 97 test, Alder Lake smashed previous records by an appreciable margin. Other browser tests showed similar, if less dramatic, results.

A slight boost to gaming

Gaming is less reliant on CPU power than on GPU power, but even so, a low-quality processor can bottleneck a beefy graphics card. That's not a problem with the Core i9-12900HK: It's showing modest-to-dramatic gains in gaming, especially on CPU-focused tests. In the 3DMark Time Spy test, the Alder Lake chip outperformed both previous Intel and AMD chips by nearly 30 percent. 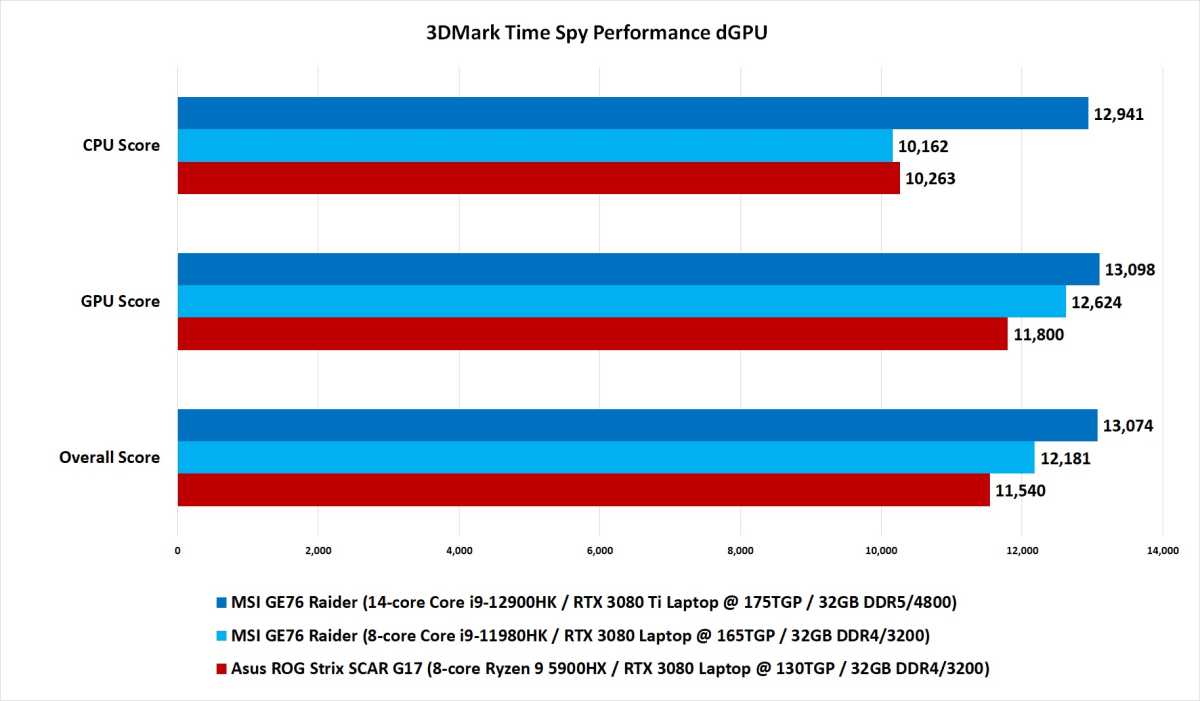 Intel already had a decisive edge on gaming performance versus an AMD laptop with a similar level of hardware, but Alder Lake boosts that. What kind of gains you'll see depends on the specific game, but you can expect to see a considerable bump over last year's Ryzen flagship and a modest bump over a Tiger Lake machine. Again, this may or may not scale further down the line into the lower-powered 7, 5, and 3-series chips from both manufacturers, and your GPU will still have a much bigger impact on overall gaming performance.

They can't all be winners, and in our battery of tests, the Core i9-12900HK remains something of a power hog. While improving upon the last generation of Intel chips by a nice margin, AMD's Ryzen 9 platform beats it for laptop battery life by 10 percent in total runtime… even with a battery that's approximately 10 percent smaller. 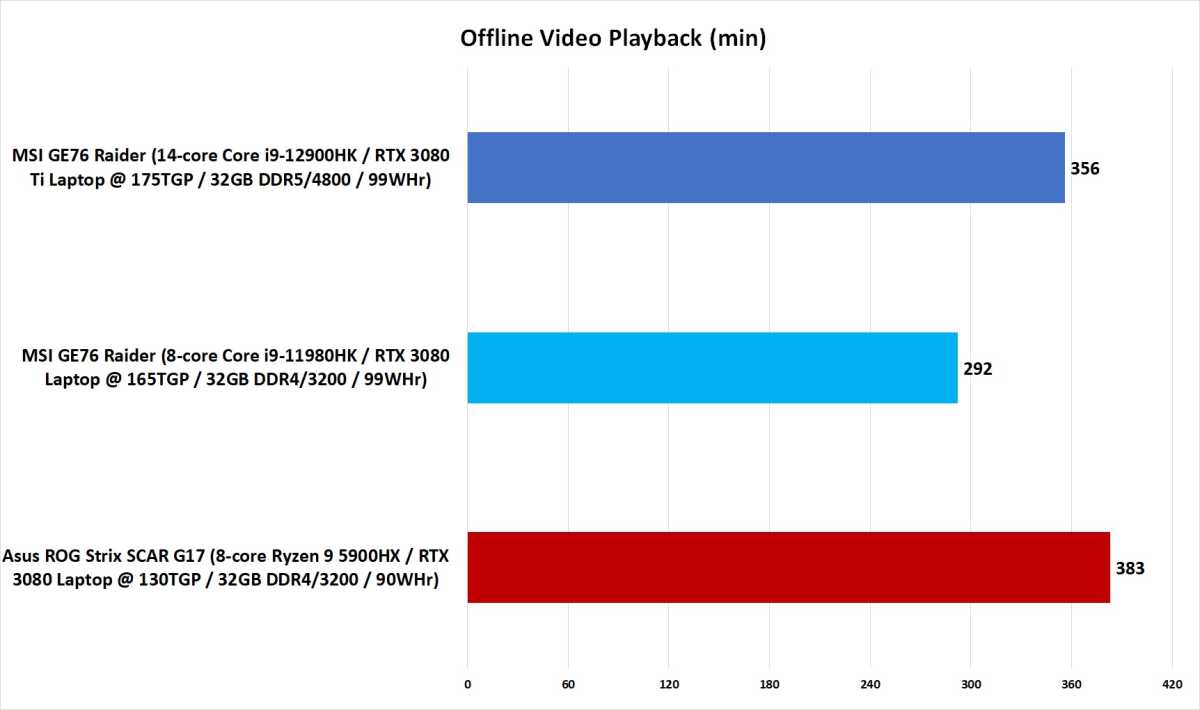 For someone seeking a laptop with the absolute fastest processor possible, battery life is probably a secondary concern — if you're editing video, rendering Blender projects, or playing Call of Duty with ray tracing enabled, odds are that you'll never forget your charging cable at home. But for those who want a bit more balance towards practicality, AMD is still offering a better choice.