A new update to Microsoft Photos brings with it a fairly radical overhaul of the way that Windows's native image app looks and feels — and with the removal of two features, not always for the better.

The new update (2021.21120.8011.0) is rolling out to everyone, and not just the Windows Insiders Microsoft occasionally tests with. While I used a test PC to manually ask for the update via the Microsoft Store app, the new version will likely be pushed to your PC within days on Windows 10 and Windows 11, if it hasn't been already.

Both the user interface and functionality have changed on what is now the editing portion of the Photos app. (Right-clicking an image will allow you to open it in Photos. Hitting CTRL+E or clicking the appropriate icon will open the editor function, which is where the changes lie.) The design is different in what are now the four (rather than three) tabs within the Editor, and Microsoft has removed two features: the Red eye and Spot fix functions.

Any photo you choose to edit will open on the Crop page, which has been tweaked in several ways. First, the straightening tool has been moved to the bottom of the screen, where the slider can be shifted either right or left to rotate the photo and align it to how you see fit. To the upper left, there's an indicator about how far the photo is zoomed in or out, tools to do so, and a tool to adjust the ratio of the dimensions of the picture. Overall, the new look of Photos offers a strong first impression. 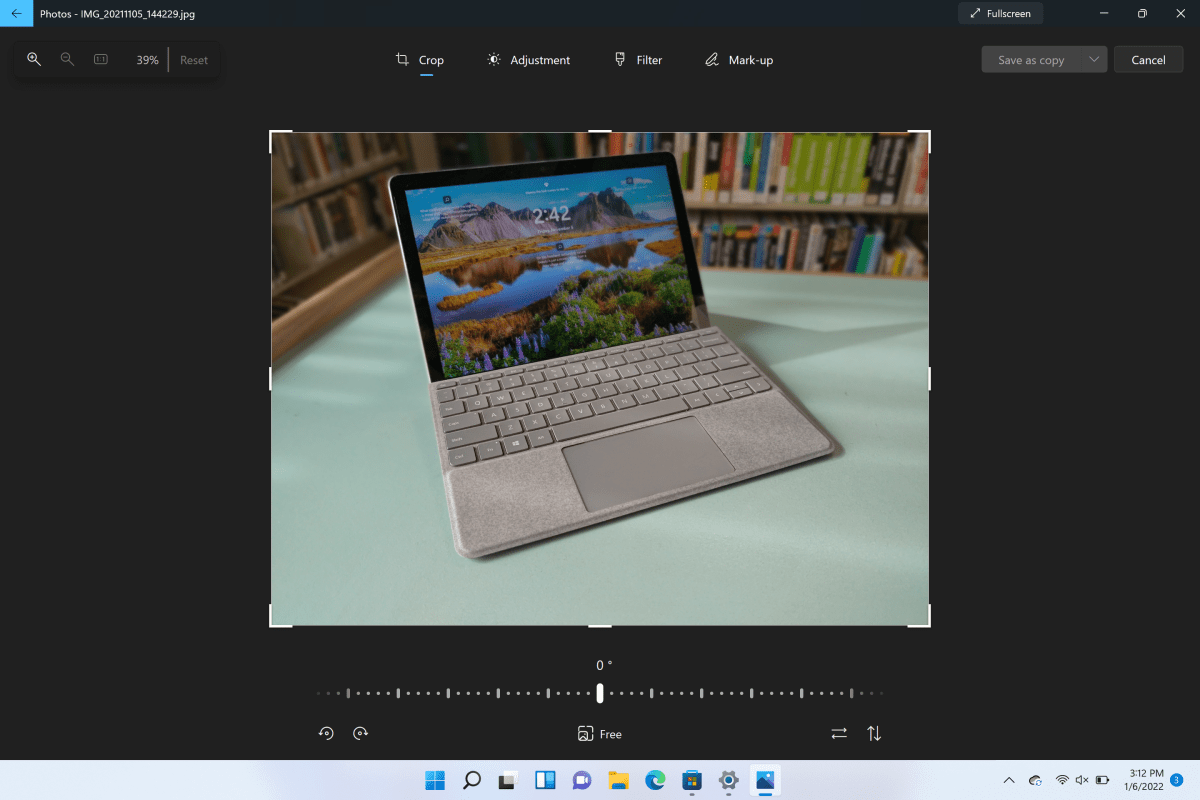 Microsoft begins its tweaking on the next tab, Adjustment, which was formerly called Filters.

On the current Filters tab, Photos places the photo in the center of the screen, with the algorithmic Enhance your photo button located to the upper right. Auto enhance applies Microsoft's own AI to your photo—lightening, darkening, and so on to bring out the best in the photo. Personally, I've found that lightly applying Auto Enhance (using the associated slider) to tweak the photo offers the best results. In the current Photos app, I've then moved to the Adjustments tab and fine-tuned the contrast, exposure, and so on using the associated tools. 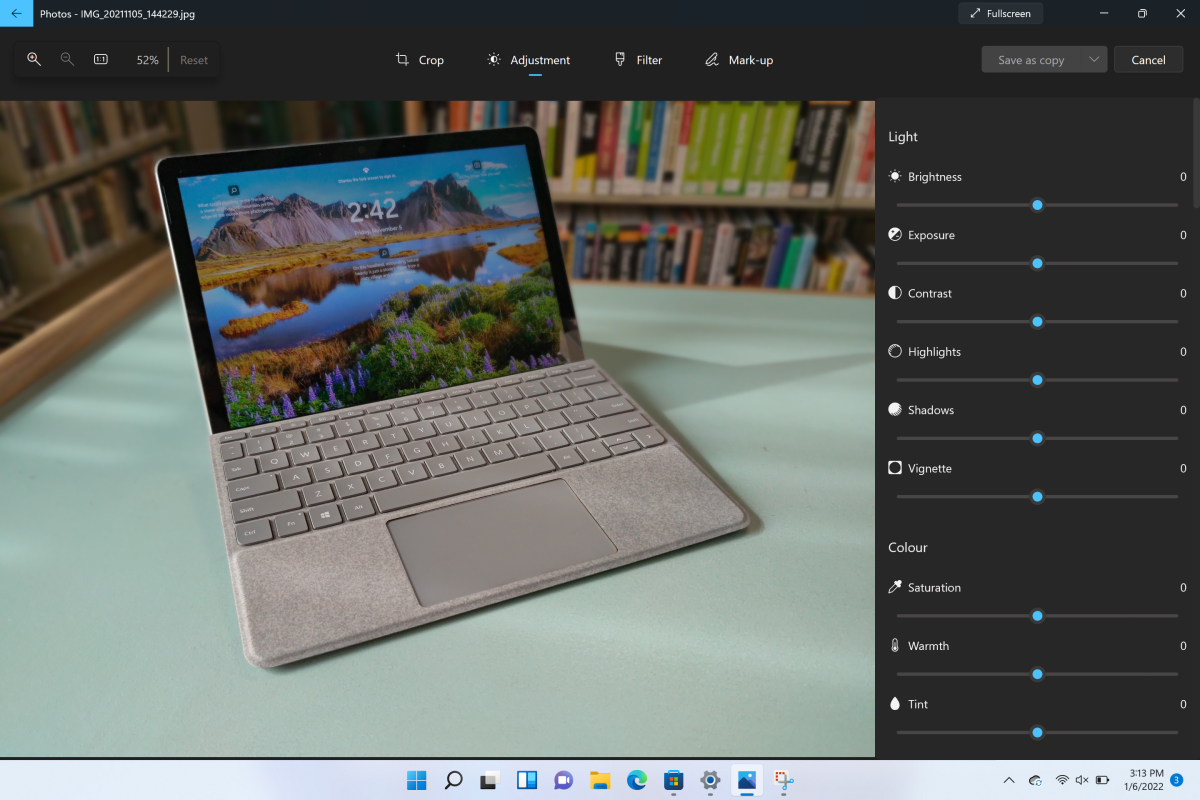 Microsoft has reorganized the Adjustment tab to essentially swap these functions, which feels a little strange. Now, the Adjustment tab takes all of the available manual photo tweaks (such as brightness, exposure, vignette, warmth, tint and so on) and offers them to you first.

It's on the now-third tab, known as Filter, where you'll find the Auto Enhance button to the upper right, with the slider bar underneath it. Below that, you'll find the various color filters that have been there all along, though they do away with the artistic names Microsoft used previously. Gone are Icarus, Sahara, and Zeke — in their place are descriptions like Radiate, Warm Contrast, and Calm. 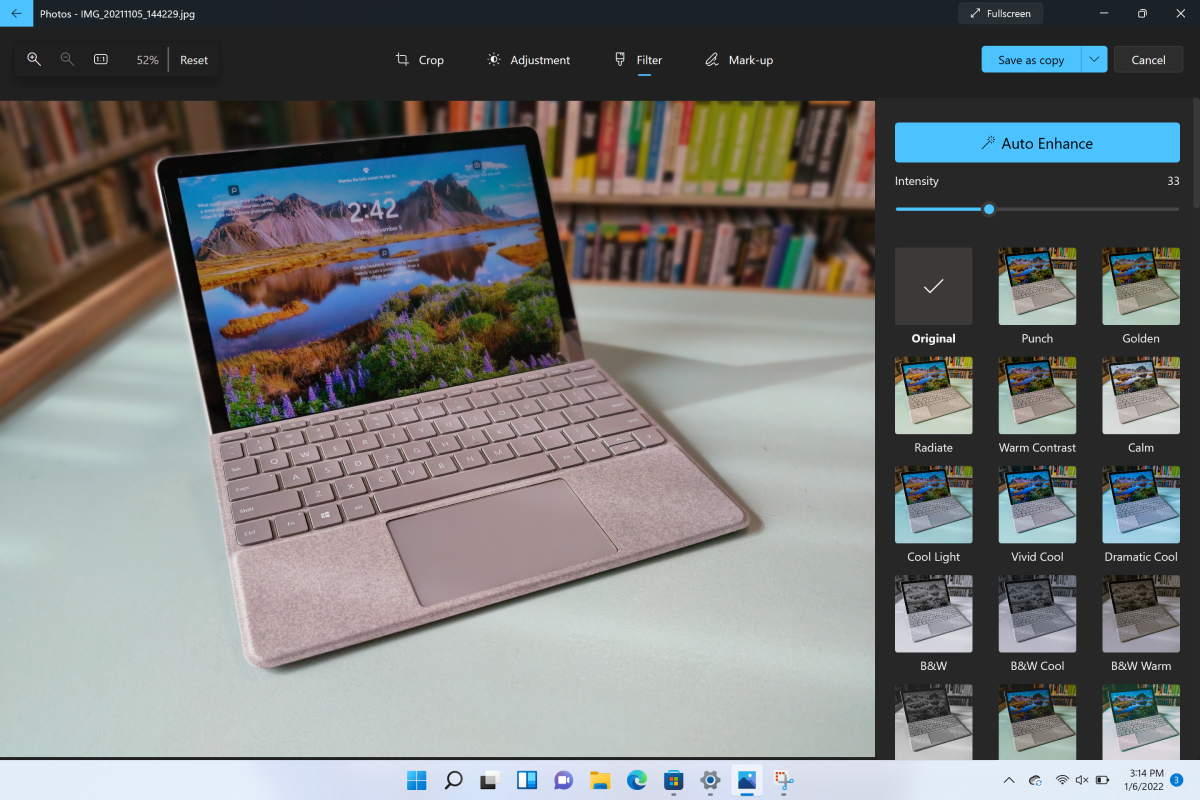 The fourth tab, Mark-up, is where you can annotate a photo. Want to draw on a photo? Here's where you do it. 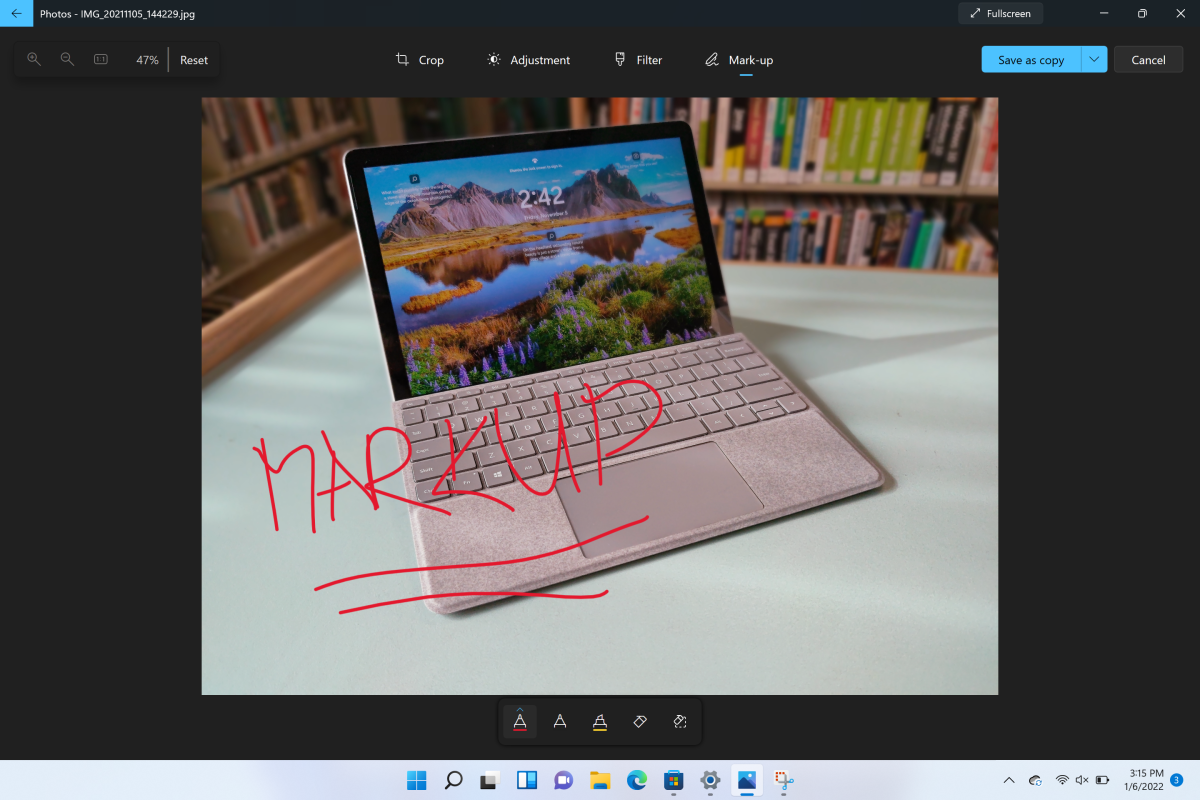 To be fair, the Crop tab appears to be well thought out and a step forward. But, otherwise, the workflow still moves opposite to what I'm used to. I tend to let Microsoft work its magic and tweak my photo using the Enhance your photo / Auto Enhance tool, then make manual changes. Windows is encouraging me to do the opposite.

I really don't like the removal of the spot fix tool, though, and I'm unreasonably upset that Microsoft would do so. You have no idea how difficult it is to clean a product or a laptop for photographing, even with a microfiber cloth. There are always unnoticeably tiny specks of dust that creep in — unnoticeable, that is, until they're right before you on a 4K screen. Stamping out that dust using the spot fix tool (which simply algorithmically looks for spots or anomalies and removes them) is one of the best features of Photos and a critical part of my workflow. (Red-eye removal seems to be fairly standard in many smartphone cameras, so I'm less concerned about that.)

Give credit where credit is due — I've been extremely frustrated by Photos, lately, and the development work is evidence that Microsoft engineers are paying attention to improving it. But at the very least eliminating Spot fix is a step back, and one I hope Microsoft changes soon.