US$149.99 / Not currently available in Australia or New Zealand.

Nextbase generally makes superior dash cams. The company's familiar classy style and usability is present in the $150 dual-channel 320XR. Sadly, it lacks what we've come to expect from Nextbase in performance. Despite both the front and rear 140-degree field-of-view cameras capturing at 1080p/30 frames per second, there was a noticeable lack of detail in the resulting images—to the point where we could barely make out a license plate number at mid-day.

It's a shame, as I love the colorful 2.5-inch display, and I especially love that both cameras couple magnetically to their semi-permanent mounts. Magnetic coupling means you can just pop off the cams and put them in your backpack—something I always do here in the city when I park my convertible on the street. Leave anything in a rag-top and it's a short slash of the fabric to being stolen.

Below is a side view of the 320XR showing its SD card slot (the power button is a mistake in this rendering; it's actually on the back). On top is the mini-USB connection for the auxiliary power adapter and on the right side (not shown) is the Type-C USB port for the rear camera. Why the USB mismatch, I can't say, though I'd guess it has to do with parts on hand.

This review is part of our ongoing roundup of the best dash cams. Go there for more reviews and buying advice. 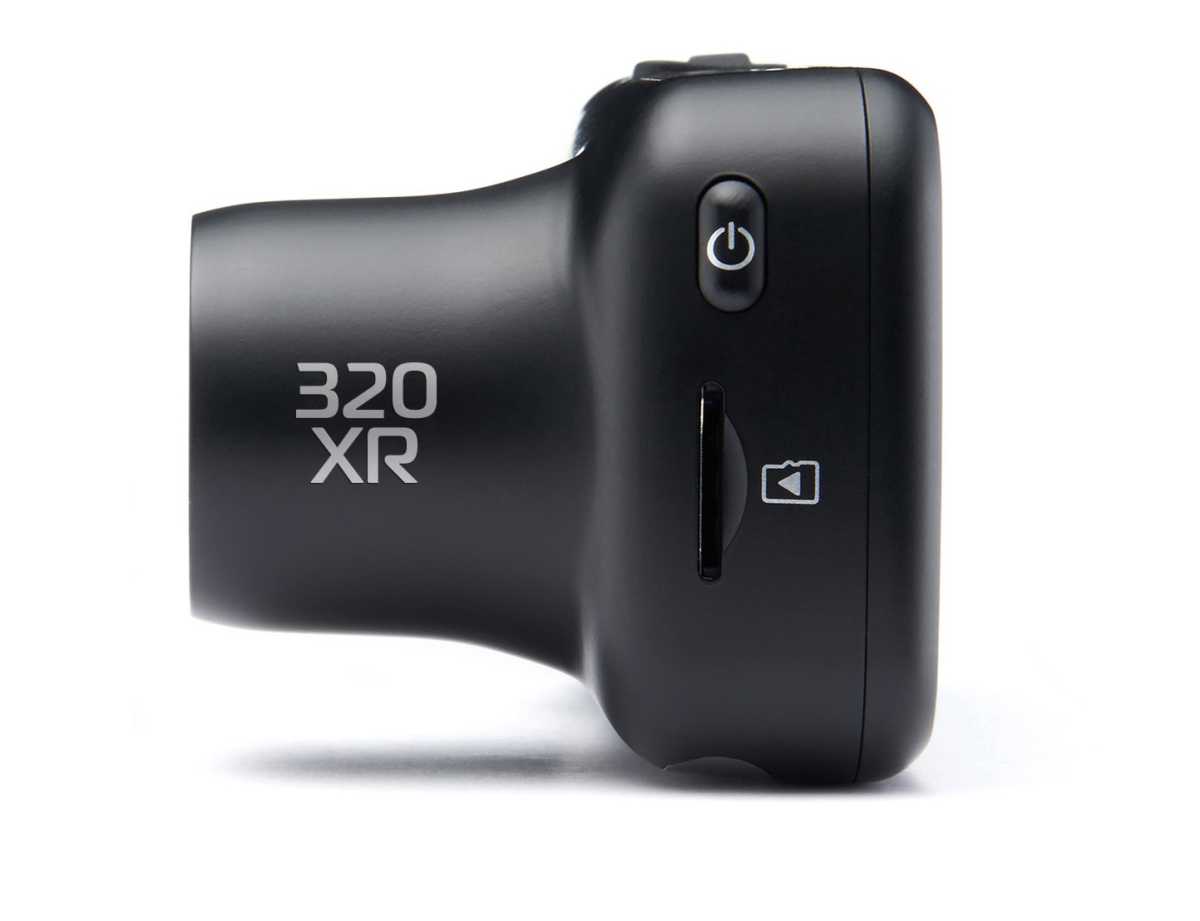 As you can see below, the main camera features six different buttons alongside the display. On the left are the power, menu, and mode buttons. The latter switches you between normal video capture mode, photo capture mode, and playback mode. On the right are the up, enter, and down buttons which are used for navigating the menus. The up button also toggles audio capture, the enter button stops/starts video recording, and the down button takes snapshots. 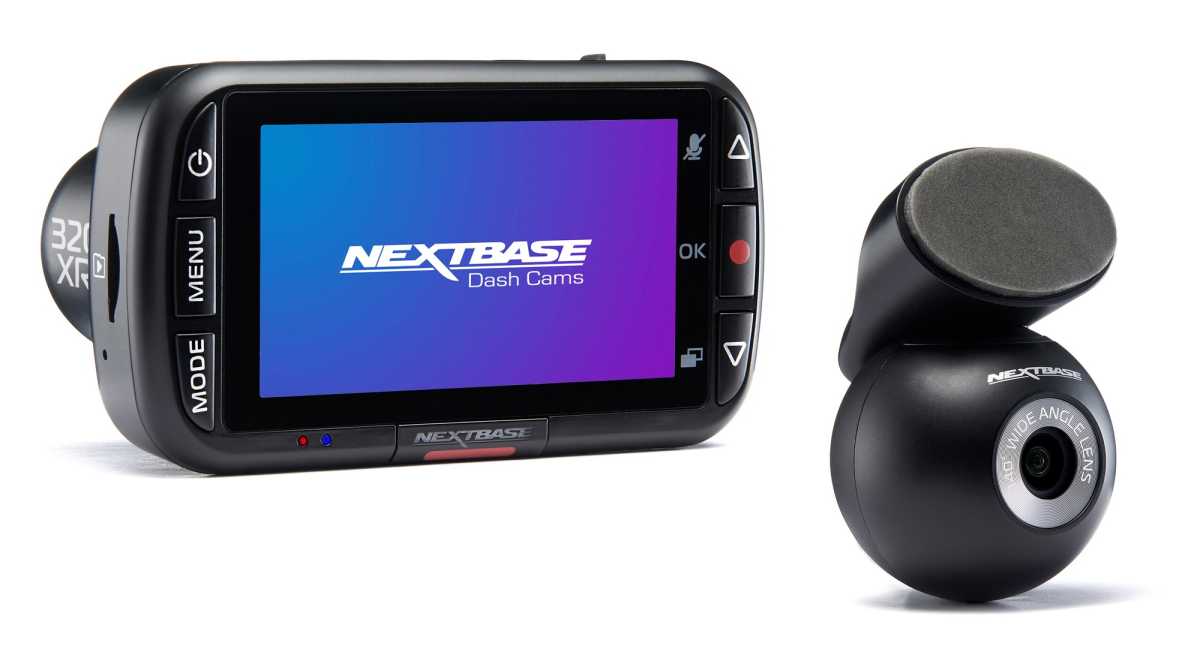 The 320XR has a 280mAh battery that will run the camera for about 15 minutes after power is removed. If the 12-volt is interrupted in an accident, it can be useful to capture subsequent events. There's also a parking mode for surveillance while you're absent from the vehicle.

That's about it for features. You won't find GPS (which can be useful for travelogues and confirming locations) nor bad driver tech such as lane departure warning. In truth, we generally find that a couple more driving lessons will more than compensate for that oversight.

While I was okay with the 320XR's captures after my first daylight run, it was largely because of the rich color. When I hit the street at night, reality set in. After-dark captures weren't detailed enough to pick up license plate numbers just 15 feet away—w ith or without my headlights on. That led me to scrutinize the daylight captures, which also proved unsatisfactory. The same license plate numbers are barely decipherable. (Note that you can right-click and open the images below in a new tab to see them in greater resolution.) 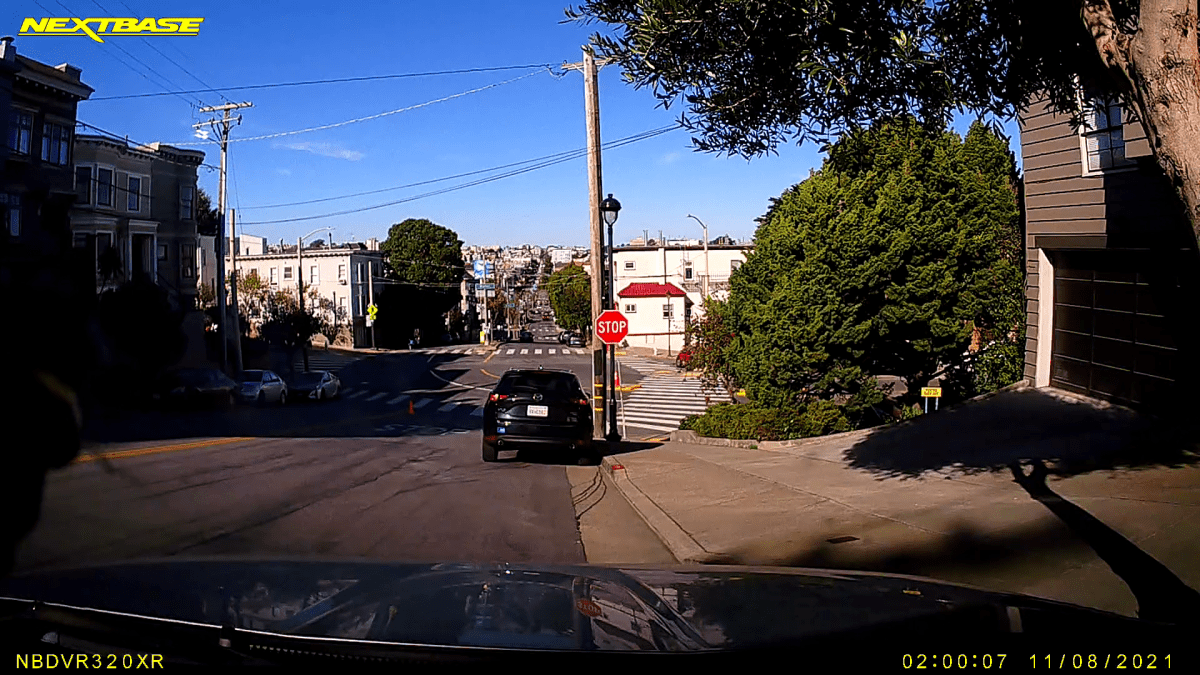 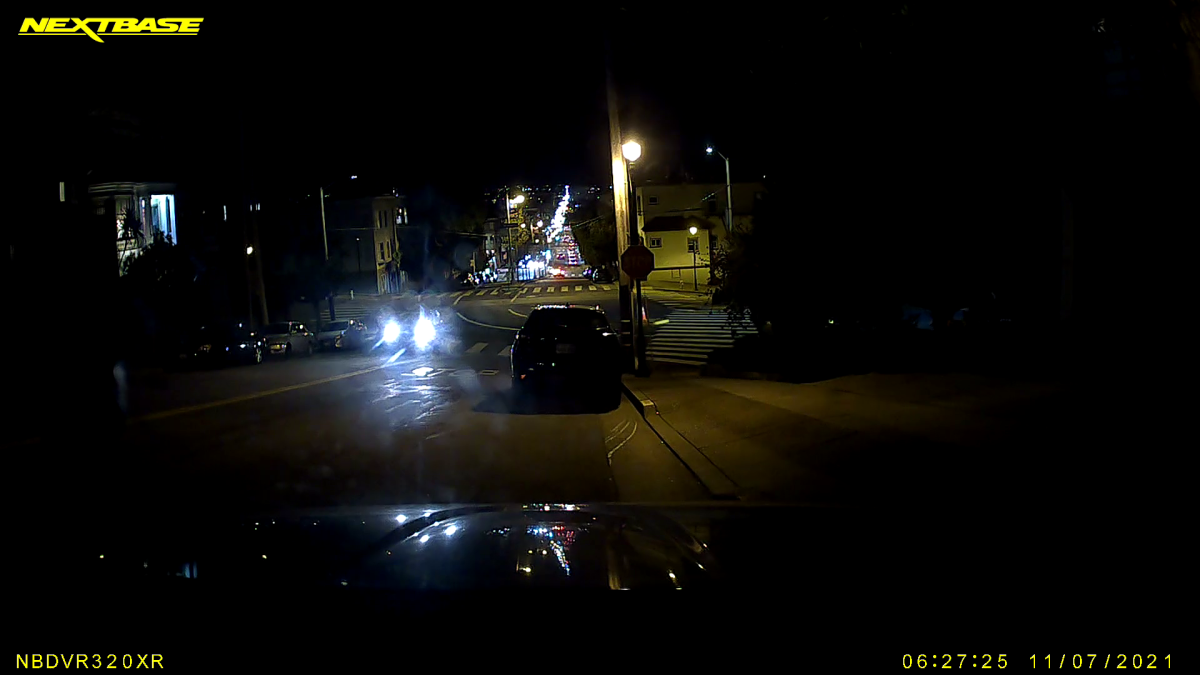 In the second capture with the headlights on, you still can't see the numbers clearly. In fact, the reflective surface blows out the darker numbers. This might be an issue if you're in an accident with another vehicle.

Brightening the captures in post-production doesn't enhance detail as it does with many cameras either. 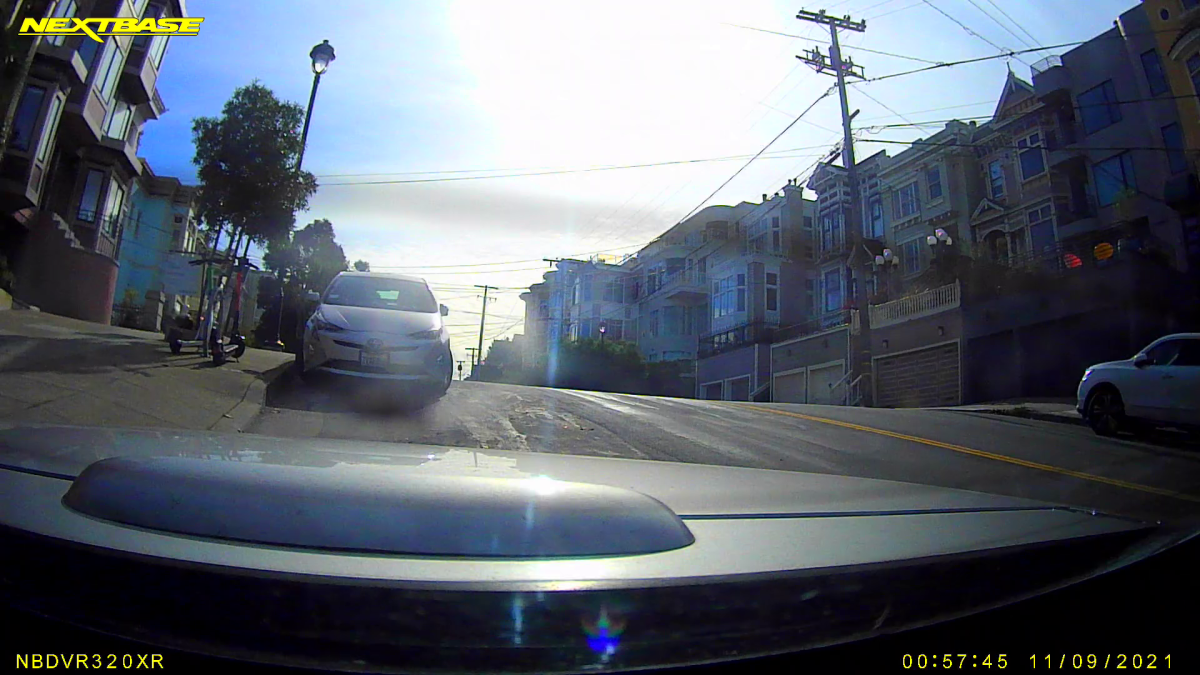 The rear night capture is the same as the front (there is distortion about two-thirds up from the heater wire and weather—i gnore those), but there was a little more light in this setting. Again, brightening the image didn't enhance detail—it's still difficult to make out numbers. 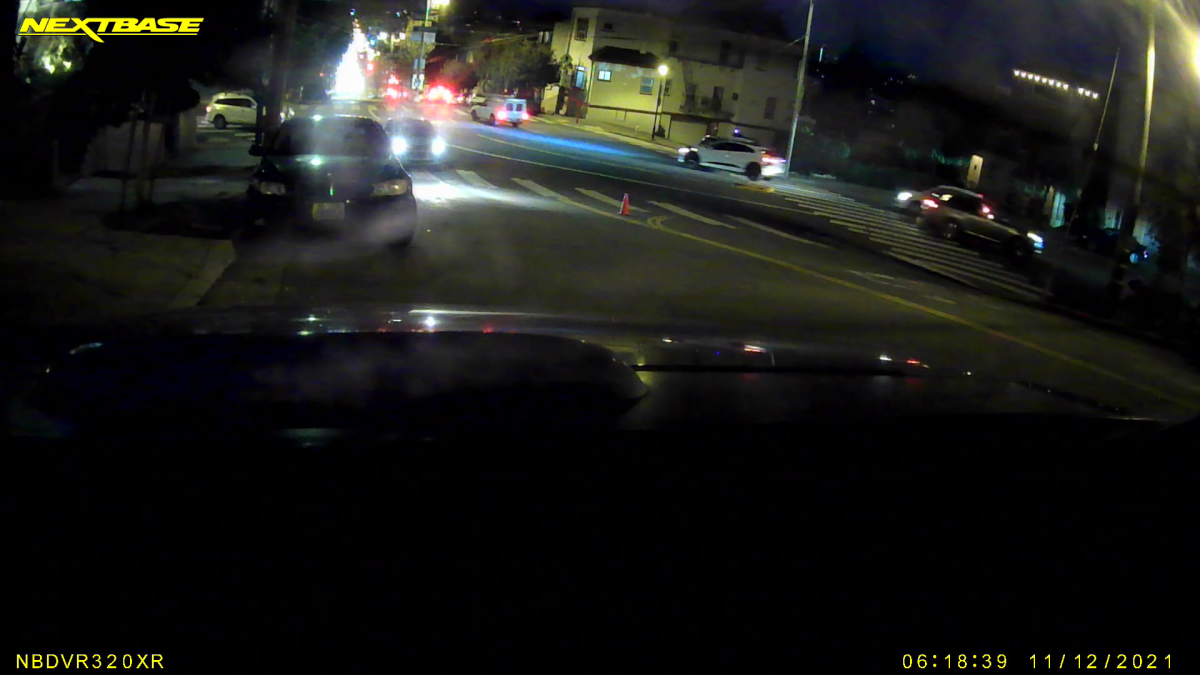 Conditions here in San Francisco make it difficult to keep my convertible's rear window clean when it's foggy. The rear captures at night are better than this might make it appear, but still not what they should be. We've seen even 720p rear cameras do a better job of capturing license plate numbers.

It's surprising and not a little frustrating how little detail Nextbase managed to pull out of the 320XR's 1080p video. The daytime captures are attractive because of their rich color and blending, but what you want are details. Those aren't nearly as legible as they should or could be.

Stylish and easy, but not up to snuff

Nobody was more surprised at the 320XR's weak capture performance than I. Until now, everything that Nextbase has sent our way was top-notch. In fact, the 422GW was one of our Christmas buying recommendations. 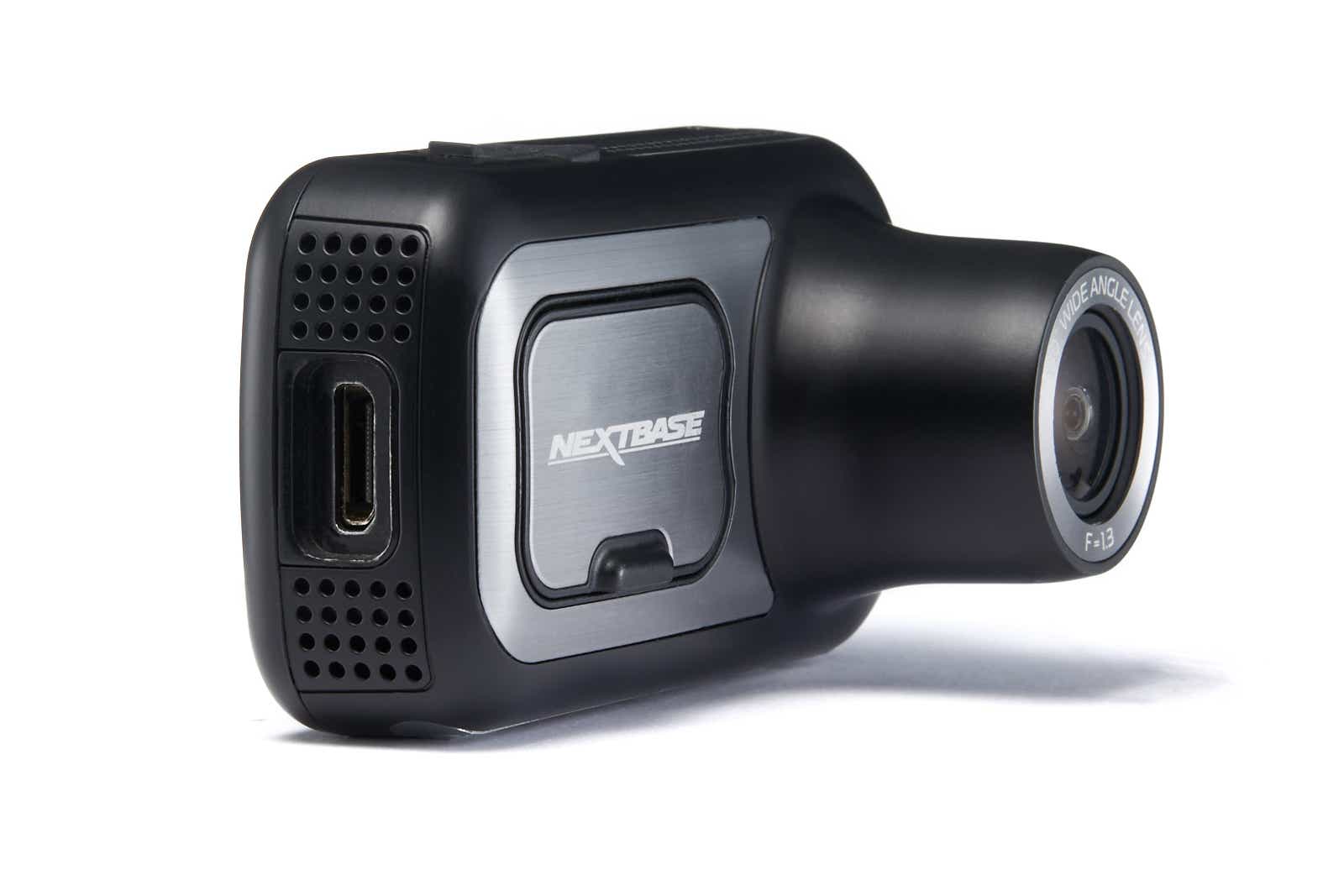 While the 320XR's style, display, and magnetic mounting are great, I can't recommend it because it doesn't deliver the detail that might make the difference in court. As they say, the devil's in the details.