You would think that computers would have destroyed both the market for and sense of nostalgia behind handheld calculators. Though dial telephones and typewriters have been left behind in the dust, kids taking math classes at all ages are often required to own a physical calculator. It might be a cheap and simple model for younger kids or an expensive graphing calculator for high-school and college math classes.

The calculator app PCalc benefits from this constant churn of kids learning a classic manually operated device. You don't have to explain a calculator's workings to today's children, despite the device having origins in the 1800s.

PCalc has built its interface around the memory of buttons you can press. But that's just its facade. Hiding underneath are many calculator layouts and styles, themes, a button and layout editor, and bananasâ€”lots of bananas, but I'll get to that at the end. For almost exactly 29 years at this writing (171 hours shy, I calculated), PCalc has kept the dream alive of one of history's most banal and important technological inventions while continually extending it to meet present needs. 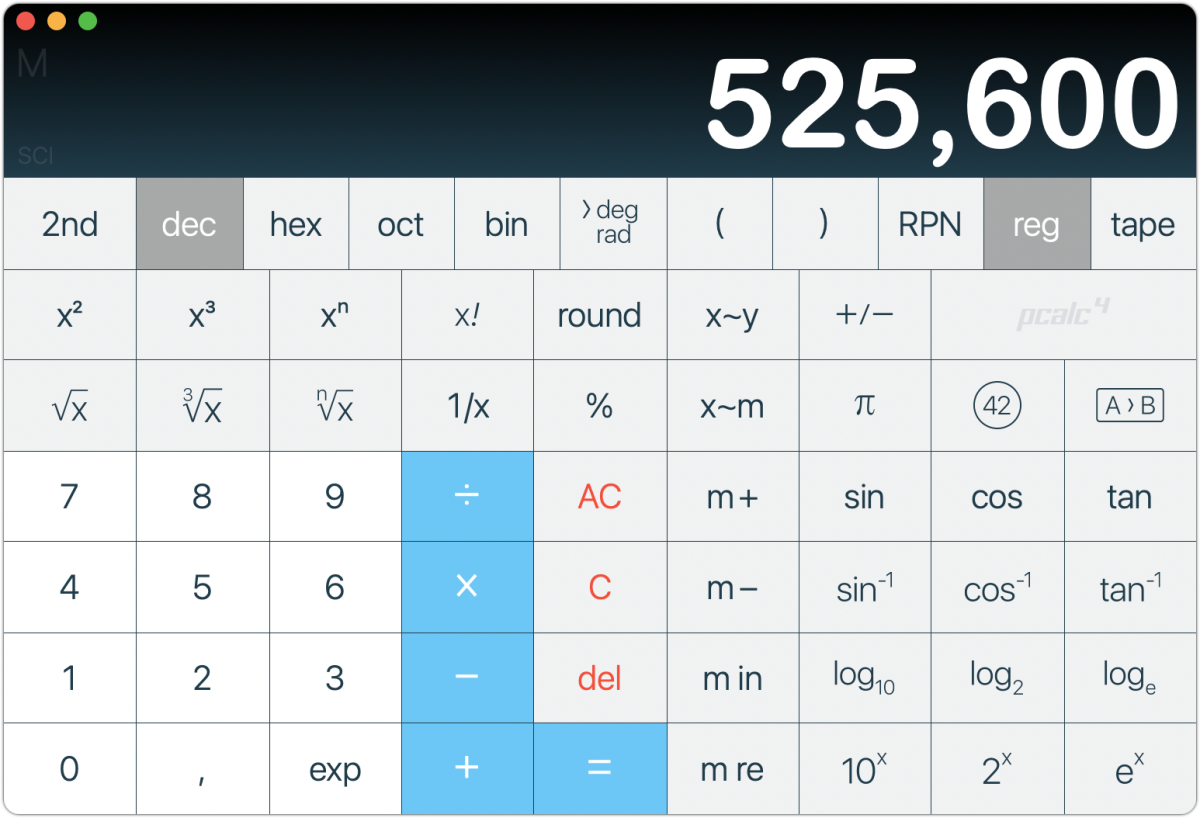 PCalc offers the familiarity of a physical calculator with the sophistication of a highly customizable app.

You can use PCalc like the plainest of basic calculators, but Apple already provides its own minimal Calculator app for that purpose. Where PCalc shines is in how it lets you select among a wide variety of preset options and customize those to the Nth degree.

Start by picking a layout from View Layout or using the one called Default. Type in the keyboard number row for entry, though a keyboard with a number pad will serve you better. You have access to several layouts designed for the Mac, but can also pull up ones for mobile devices if you like those better or use PCalc on other devices. (PCalc is also available for iOS, iPadOS, and watchOS, and for tvOS. Some user data, like custom layouts, syncs via iCloud if that option is enabled.)

Dig in via the View menu to customize the way in which numbers are shown, how the calculator accepts or parses input, and how it presents its parts. Want the display to show more lines? Choose View Lines and a number or Smart Resize. If you're more comfortable with an accounting-style entry, in which numbers entered are assumed to include tenths and hundredths without requiring including a period, you can opt for it all the time or whenever you want.

PCalc starts you off with a number of themes. Themes have unique color palettes, but they also control the roundedness of buttons. You can tweak themes to your heart's delight and save new ones. That's true of layouts, too: if regular, engineering, programming, and other formats don't fit you to a T, choose Edit Layout Edit Layout and rewire where buttons are, their sizes, and what they do. 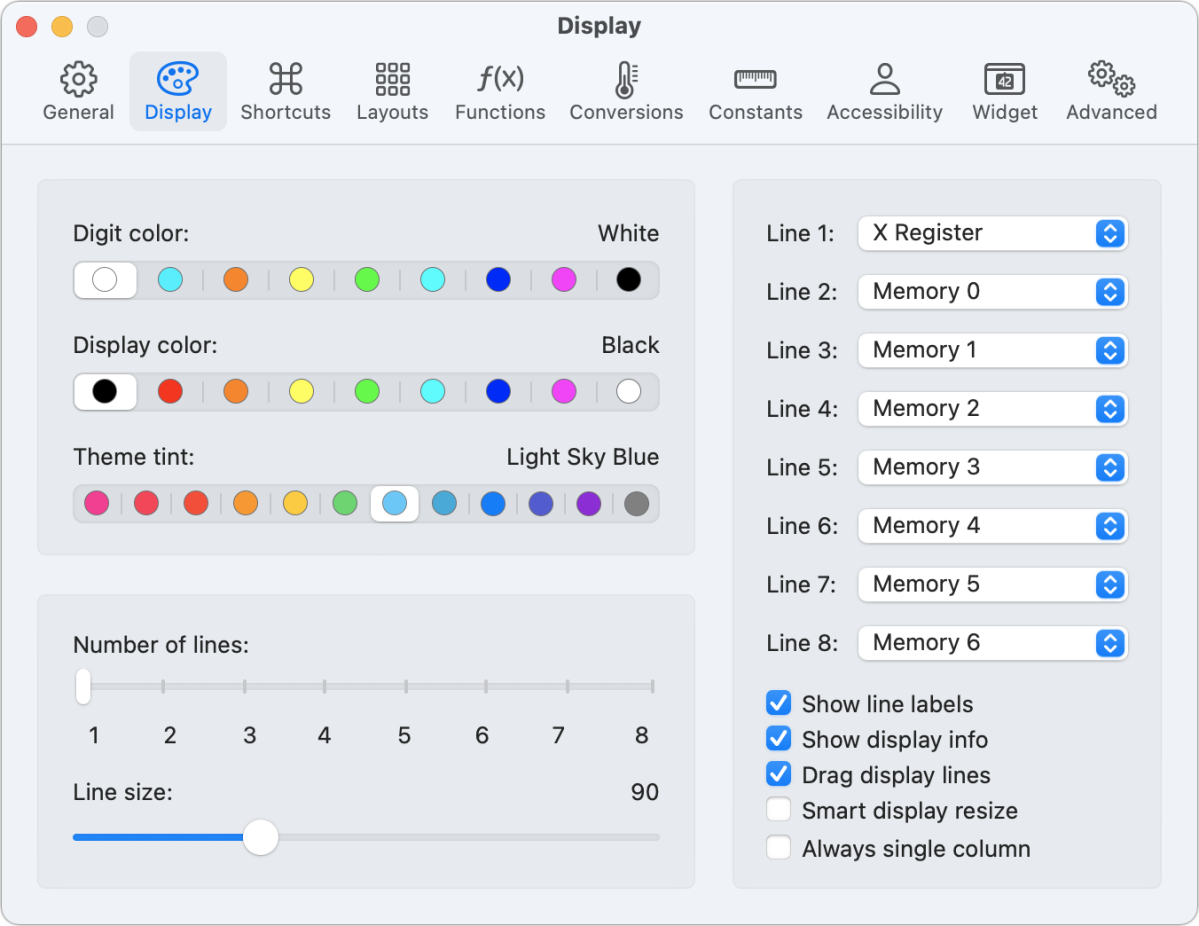 Along with the calculator options, you can view the Tape window, which shows a running series of all actions performed, both entries and results. PCalc can also reveal a Registers window, showing the values held in various temporary locations and displaying conversions across common bases (like hex and octal) and as ASCII text and Unicode.

PCalc comes with constants and conversions across a wide swath of human endeavor and needs. You can pull up the Classical Electron Radius to insert into a calculation, or convert U.S. gallons to cubic centimeters. It also includes a handful of formulas. Currency conversions use exchange rates that are updated automatically.

I've already described the degree (or radian) to which PCalc is customizable, but it goes far, far, further. The Preferences dialog lets you change the provided keyboard shortcuts, which are extensive; choose among accessibility options; and define your own constants, conversions, and formulas.

Clicking the Advanced button in Preferences may require some preparation for its journey, like a light lunch and a pack mule. TLA Systems wants you to make PCalc as much your own custom calculator hub as it is theirs, and it rewards an investment in understanding the options. 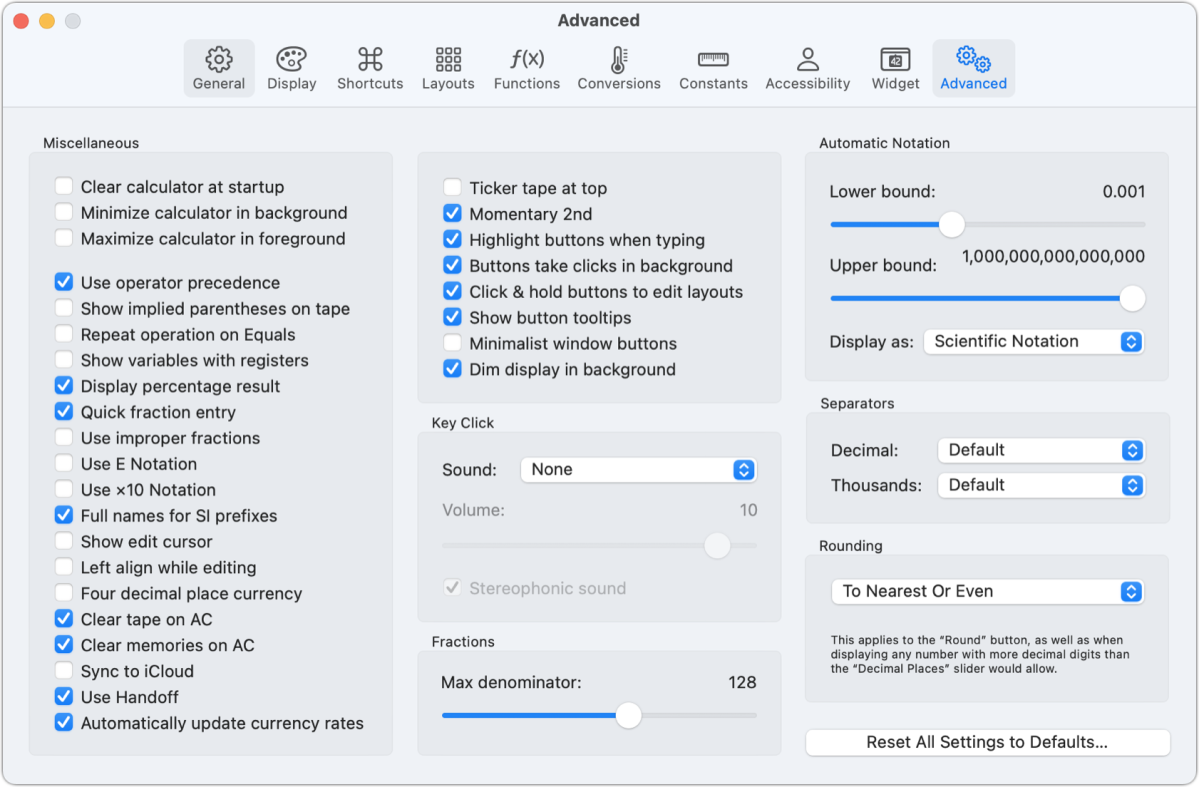 Settle in a while before tackling Advanced preferences, which provide settings that let you tweak PCalc to reckon the way you want.

The latest major release, version 4.9, shipped in February 2021 with a complete layout editor (formerly, some features were reserved for iOS/iPadOS) and a new menu bar widget. This widget can show a basic, advanced, or currency-oriented layout, or you can roll your own. A more modest update, version 4.10, appeared in October 2021 with Monterey compatibility, including for Shortcuts and Quick Notes.

About the bananas I mentioned earlier. When Apple started adding powerful animation, physics modeling, and other frameworks into iOS and then macOS, developer James Thomson created some amusing experimentations that have, over time, turned into a fleshed-out environment in PCalc's About screen. Click the PCalc logo on a calculator or choose PCalc About PCalc (Command-Shift-A) to open it. You can throw bananas at a 3D-rendered version of the logo, drive a car around a track and try to perform loop-de-loops, and drop hundreds of realistically rendered dice that bounce and roll as gravity intended. It's a charming playground that inevitably led to TLA Systems's Dice by PCalc app ($1.99 for iOS/iPadOS/tvOS/watchOS and $1.99 for macOS). 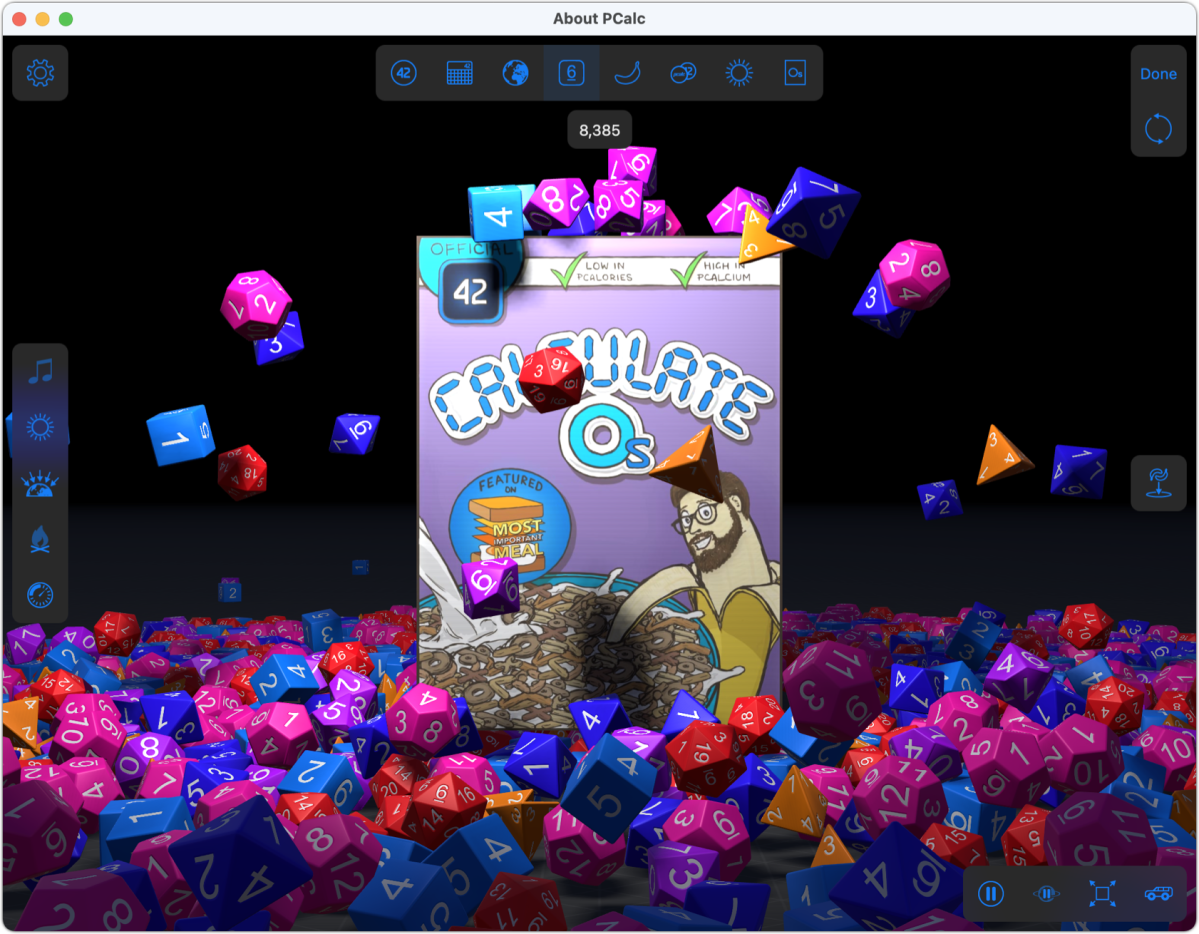 When you need a break from pumping numbers, the About screen offers endless arrays of rendered nonsense, and a driving game.

PCalc is also bananas about inflation, which the developer can't seem to calculate: the app cost $19.99 through 2008; when the iOS version shipped that year, PCalc for macOS dropped to $9.99, and it's remained there since. The current version works with Mac OS X 10.11 El Capitan or later; it's fully updated for Monterey.

It's testament to humanity's need to enter numbers one at a time and transform them that PCalc persists. Not only persists, but finds new features to add to an app that could have matured decades ago. PCalc offers one of the best calculators for macOS out of the virtual box, while also providing the greatest versatility and configurability.

Macworld last reviewed PCalc for version 3 in 2014, when the then-editor of Mac Gems wrote, TLA Systems has designed the ultimate scientific calculator: one that's fantastic today, but that's also regularly updated with new features, functions, and faces. That remains true.

With the strong resurgence of the Mac in recent years, we want to celebrate the tools we use and that readers recommend to make the most of your macOS experience. Mac Gems highlights great nuggets of Mac software, apps that have a high utility, have a sharp focus on a limited set of problems to solve, and are generally developed by an individual or small company. Stay tuned for weekly updates, and send your suggestions to the Mac Gems Twitter feed (@macgems).