We need to talk about Photos, Microsoft. It sucks.

In Windows 10, Photos debuted as part photo viewer, part photo editor. It was a landing pad for the Story Remix 3D effects that users turned their noses up at, but shouldn't have. It was, and can still be, one of those Windows tools that fuses productivity and creativity. I can't quit it.

But I want to, because Photos is simply too frustrating to use, and its many flaws rob it of its utility. I hate using terms like sucks in print, as it comes off as juvenile and reactionary. But Photos absolutely sucks right now. It sucks! And Microsoft owes it to its users to fix it.

Like any app, Photos crashed occasionally within Windows 10—in Photos' case, after editing a photo and then trying to save it. Within Windows 11, the app crashes even more frequently, for a variety of reasons. Somewhere between opening a file, editing it, and then saving the edited photo, Photos will simply hang or crash, forcing you to restart the editing process all over again.

Sometimes my edits will actually save. Sometimes they won't. It all adds a bit of mystery! Why can't I just automatically save the edited photo as a new file? Why do I have to save a copy and then hunt down the duplicate? Why can a multi-megabyte Excel spreadsheet save automatically to the cloud, but Photos can't? Why can I connect my smartphone to OneDrive, automatically upload the photos in the background…then wait minutes for Photos to connect to the cloud and find them? It's all part of the fun.

In any event, something goes wrong frequently enough that I've almost come to expect it as a consequence of using Photos. Have I just spent five minutes painstakingly stamping out dust spots on a product photo using Photos' spot fix tool? Of course I have. And then there's Photos, curled up like a cat next to a very expensive vase.

Photos offers a number of handy features that you'd expect to find elsewhere: cropping, zooming, filters, ways to alter the lighting, contrast, and tint. But tools like spot fix are the apologies you can't help but accept for its other flaws. Photos' enhance your photo tool and its spot fix make Photos sparkle, even though those specific tools haven't been added to or updated in years. But they're there, free, right in front of you within Windows, waiting to be appreciated.

Enhance your photo assesses your photo and algorithmically applies improvements in one fell swoop, which can include a number of separate tweaks all applied simultaneously. It's a little aggressive —I can and do often dial down its effects via a slider bar—but the tool can fix a photo in seconds. (There was a time many months back when Microsoft inexplicably pulled this capability from Photos, then quietly added it back in, probably just to mess with us.) 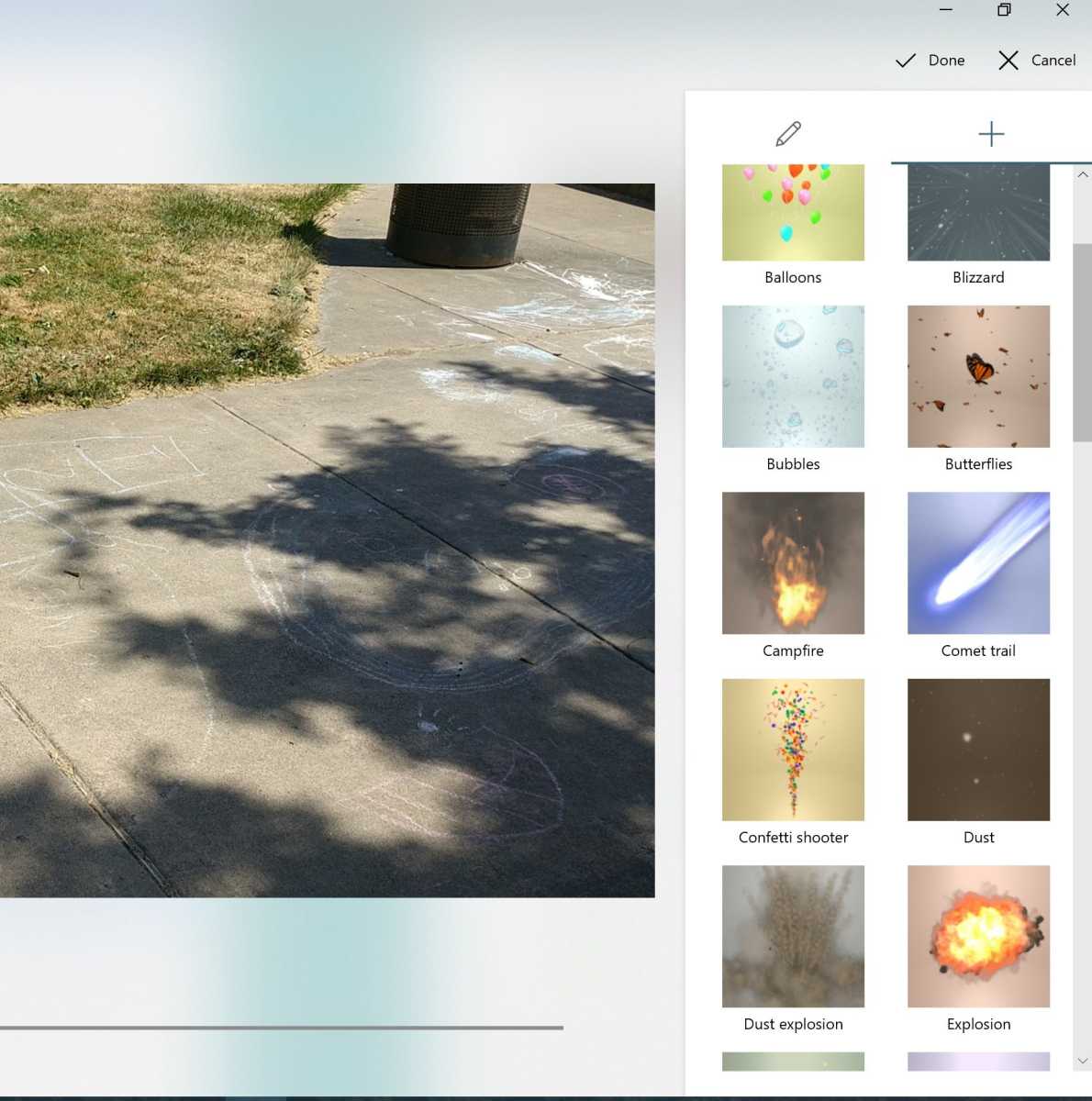 What Photos was: an opportunity to add creative effects to photos, as well as edit them. Image: Mark Hachman / IDG

Spot fix is another underrated feature. I can dust down a review laptop, snap a photo with my phone, edit it—and discover multiple specks of dust I never noticed before. Spot fix allows you to encircle a speck with the tool, click, and then Photos removes it from the image. It's a quick, handy edit that cleans up a photo—w hen it works, about 90 percent of the time. In the remaining 10 percent or so, Photos thinks that the dust speck is supposed to be there, and will refuse to remove it. It will even occasionally apply it to other spots that you're trying to fix.

The new thumbnails feature, however, is still broken, at least with my workflow. Thumbnails is supposed to apply a small line of thumbnail images below the image you have open and are editing, allowing you to scrub back and forth like a video stream. A related feature allows you to highlight and compare multiple photos.

I typically use Photos as part of a specific workflow: I'll shoot several photos of an event or a product for a news story or review with my phone, which are automatically uploaded into the Microsoft OneDrive cloud, and the camera roll folder. I've set up Photos to connect to OneDrive, where I can view thumbnails of the photos I've just taken. After I return to my desk, I'll review each photo, select the best representative images, and then edit them using Photos' built-in tools. I'll then typically save them to my local PC for eventual upload into our content-management system, or CMS.

Maybe it's the fact that photos need to load in from OneDrive, but thumbnails barely works on Windows 11. Not only do thumbnails rarely appear, but if they do, switching between them is just another opportunity for Photos to crash. The only time I've found thumbnails work with any consistency is when I've left the Photos window open overnight, so that the app has a prolonged period of time to download them from OneDrive. As it is, that's a hoop I'm not willing to jump through. 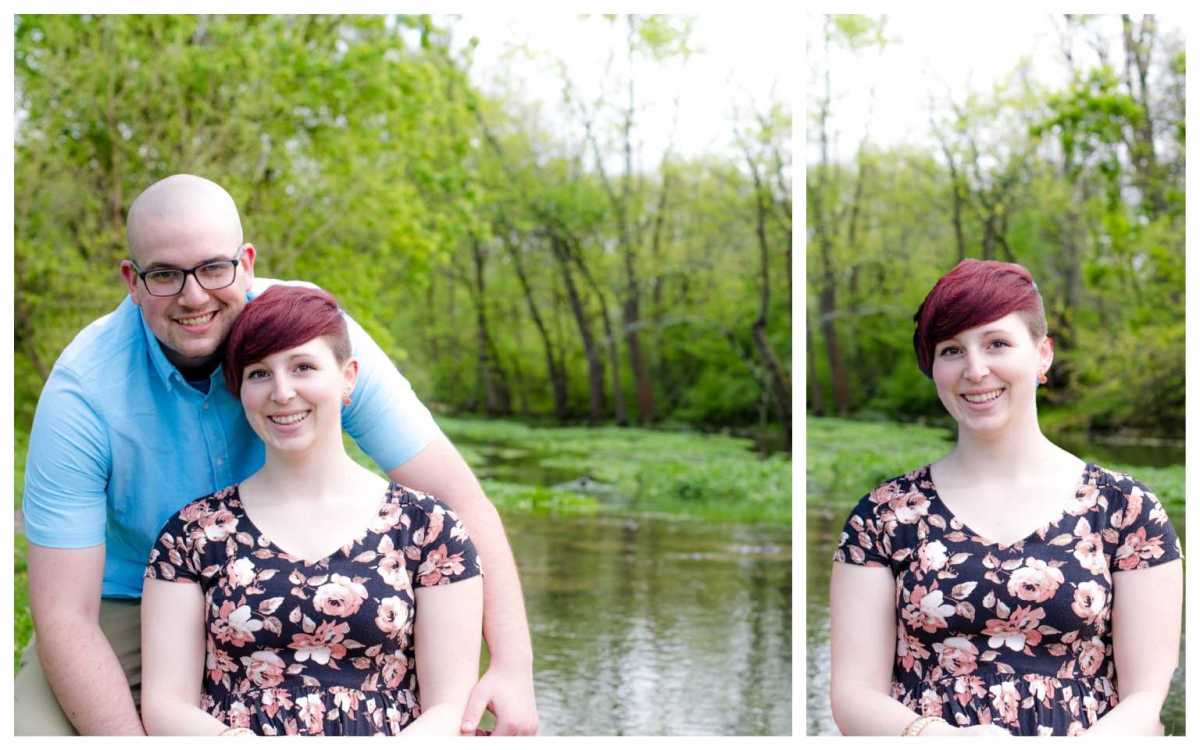 What Photos could be: the Magic Select tool, in action.

(The original photo is credited to Cara Neil, on Flickr, in the public domain. Edits to the second photo were made by IDG's Mark Hachman using Magic Select, including cropping and moving the woman over to a separate part of the scene.) Cara Neil

I've written before about Paint 3D's Magic Select tool—Microsoft's version of the Photoshop Magic Wand—and how it can be used to algorithmically trim backgrounds from an image, and how frustrating it is that Microsoft hasn't applied the tech to it to its other tools. You'd think that applying Magic Select to Photos would be a no-brainer, especially as part of a Photos refresh for Windows 11! It was right there.

For now, I'm stuck with Photos. My employer has never been too enthusiastic about paying for a full-fledged Adobe Creative Cloud license or even a single-app Photoshop license at $33 per month (?!). Photoshop Elements is another option (currently on sale for $69.99 at the Microsoft Store) but users seem to uniformly complain that it opens slowly, and to a landing screen at that. I haven't had the time to dig through open-source image editors like GIMP yet, though our 2019 GIMP for beginners story is an excellent place to start. And I honestly like Photos.

I simply don't care about Mica or rounded corners or whatever Microsoft needs to do to gussy up Photos for Windows 11. Aesthetics matter! New features matter! But first, the damn thing has to work.