When the Lenovo IdeaPad Chromebeook Duet released, it was the best Chrome-powered tablet on the market (with apologies to my long-suffering Pixel Slate). Between the stylish design and affordable price point, it had a lot to offer. As ideal as it was to service the budget market, many (including myself) have been waiting for a slightly more premium version that offers a few extra features.

Enter the IdeaPad Chromebook Duet 5. It's packing more power and memory, and the screen is big and vibrant. Although it appears to be the perfect sequel device at first glance, there were a few shortcomings that knocked it down a few pegs. 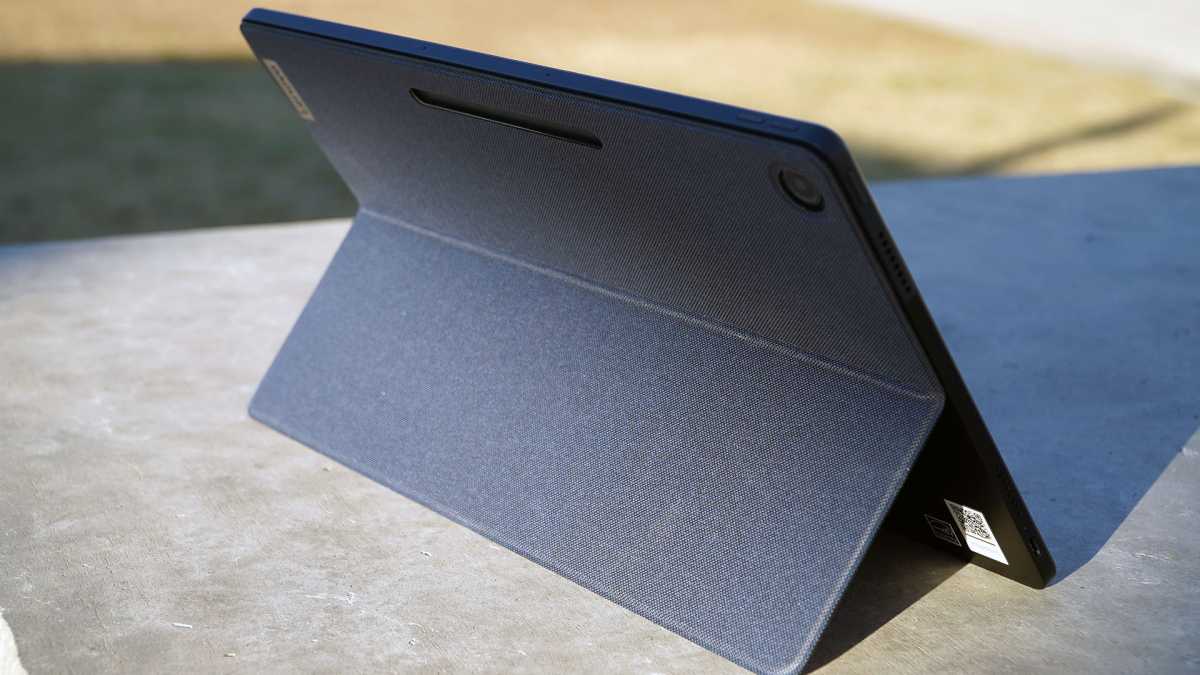 Unfortunately, there were a couple of things that kept this otherwise excellent machine from reaching the near-perfect status of its predecessor. With a larger price comes higher expectations, so the sacrifices count for a lot more.

While the Duet 5 outshines its predecessor at laptop-style tasks, especially video, its design changes make it less effective as a tablet. At this price range, it's hard to recommend over a conventional Chromebook. Unless you really need that gorgeous OLED screen, there are more practical choices out there.

The Lenovo IdeaPad Duet 5 is a Chrome OS-powered tablet with a full keyboard and trackpad attachment plus a detachable kickstand. It's the same setup as the original Duet, super-sized from ten inches to 13.3, approximately the same size as a Surface Pro. But at about half the price and including a keyboard in the box, it's a much better bargain.

The screen isn't just bigger, it's much better. While the resolution is actually a small step down at 1920×1080, it's been changed from a standard LCD to a brilliant OLED panel, the same kind of vibrant tech you'll see on smartphones and high-end media laptops. That makes every pixel pop with amazing contrast and color. 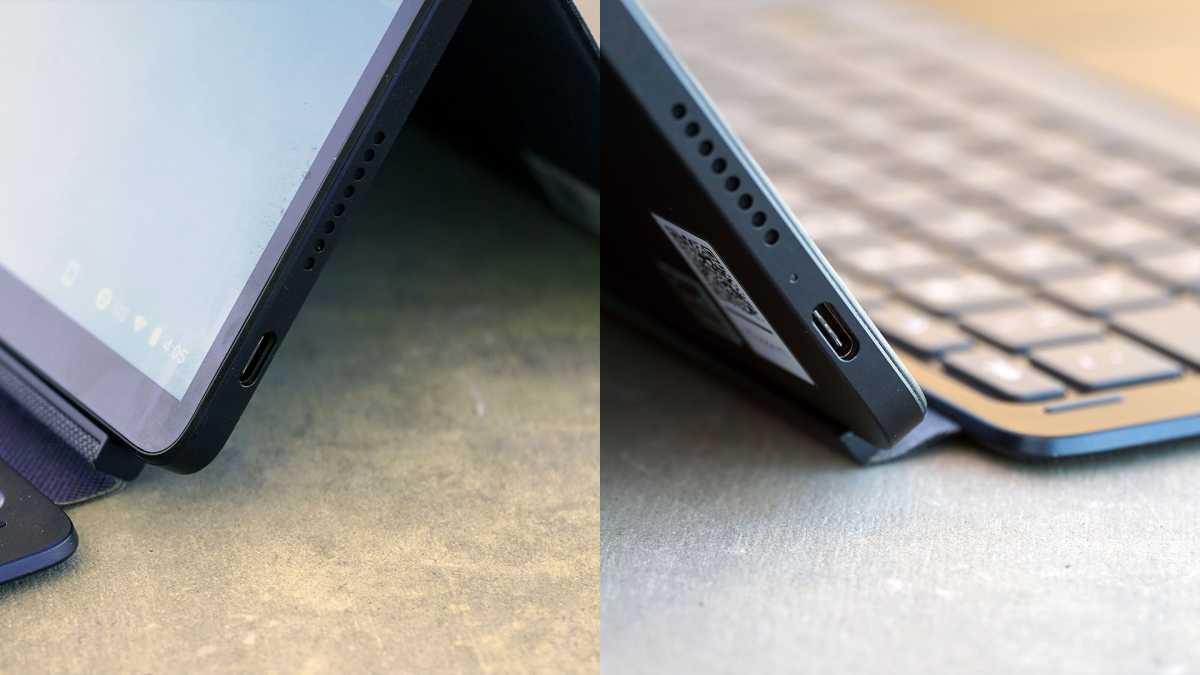 The Duet 5 improves in a couple of other vital areas, too. The new Snapdragon SC7180 is a big improvement over the MediaTek chip on the original and it's now offered with up to 8GB of memory. I'd heartily recommend that upgrade for almost any Chromebook. On the review unit, it makes the OS pop and snap with a lot more smoothness. It also has a boosted 128GB of storage, though for Chrome OS, that's not especially important.

The keyboard and trackpad are notably better on this model. The extra width gives it more of a full laptop feel and the extra space for your fingers makes it easier to get around the UI. I also appreciate that there's a USB-C port on both sides, which makes charging the tablet up on the go much more convenient. And that low-power ARM hardware means it can juice up — albeit slowly — on as little as ten watts from a mobile USB-C charger. 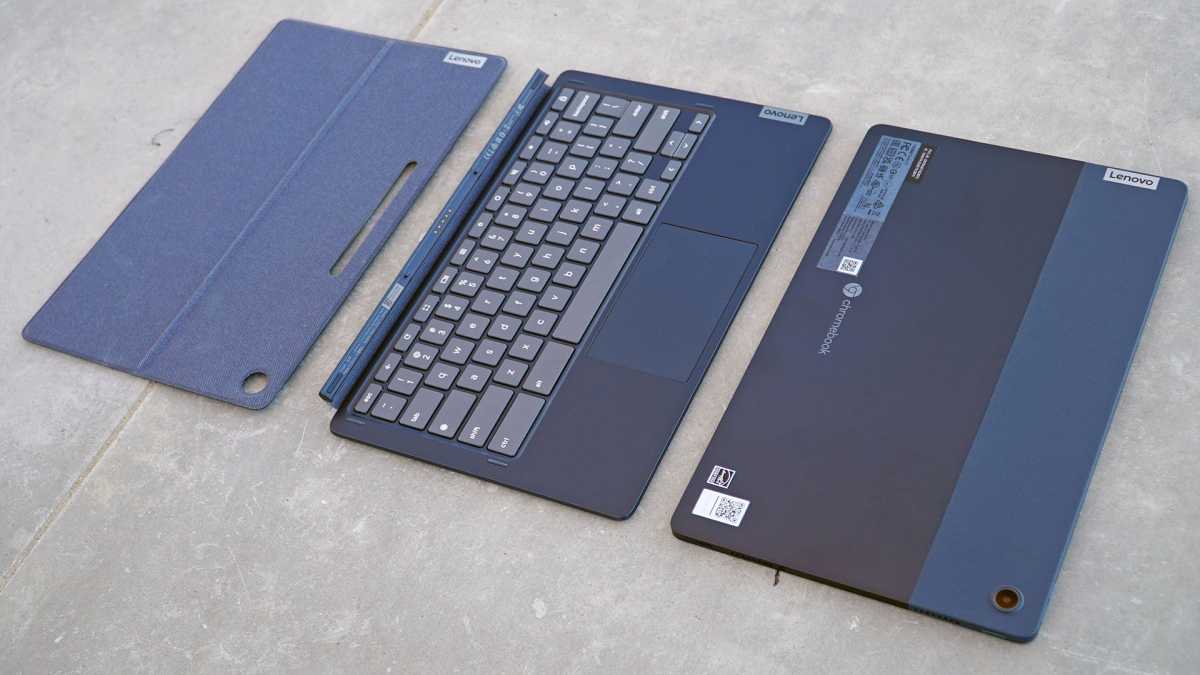 Both the keyboard and the fabric-covered kickstand can be removed for a minimal tablet setup. Image: Michael Crider/IDG

I'd have liked to have seen a stylus included in the package and perhaps a fingerprint sensor for easy logins — I know it's an easy addition on that Qualcomm chip. But for this price, what you get is still a bargain. There are a few Chrome OS annoyances that haven't been fixed, like a weird bug that forced me to log in with a full password instead of a PIN several times, but I'm laying those squarely at the feet of Google.

Great as a laptop…

There are a few tasks that the Duet 5 excels at and does better than the original. First, it's absolutely fantastic at video. Even though 1080p resolution isn't anything special, the OLED panel is, as it makes any kind of fullscreen video look great. This also means it's a good lightweight, low-cost option for game streaming on Xbox Game Pass, Stadia, or GeForce Now. 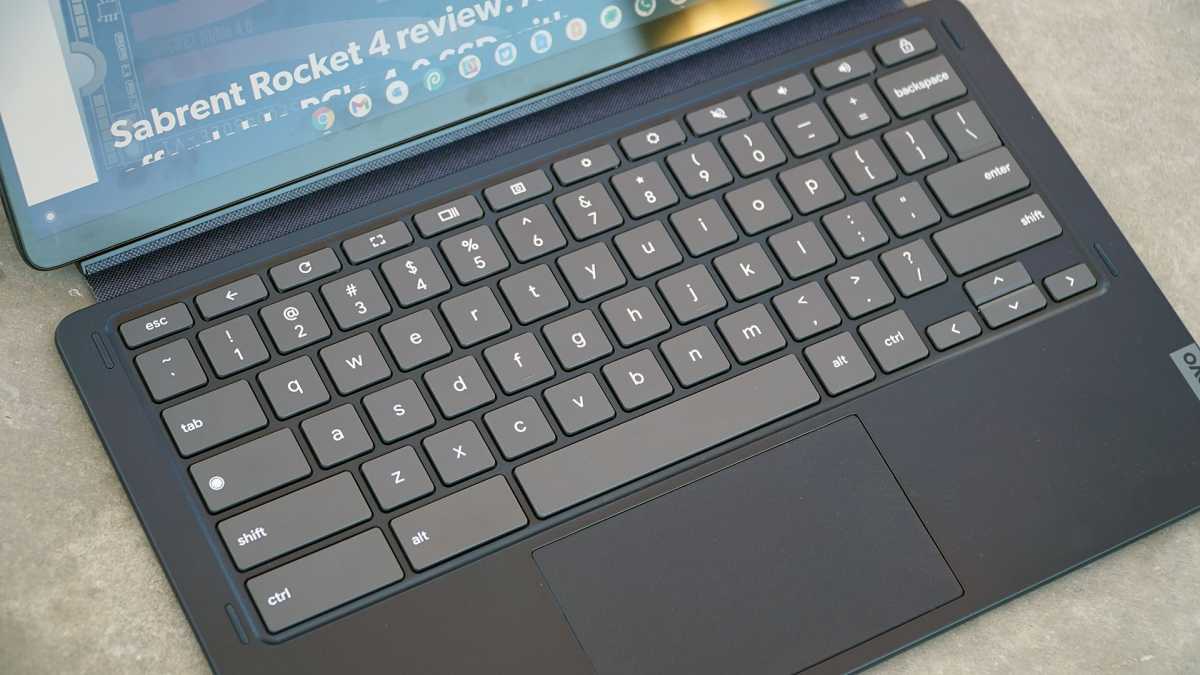 The Duet 5 is also good at conventional laptop stuff: email, word processing, web browsing, you know the drill. Anything you'd sit down for an extended time to do on a laptop, the Duet 5 can handle. Its keyboard isn't quite as good as Microsoft's pricey Surface add-ons or a scissor-switch, but it's more than adequate enough to pound out a thousand words or two.

Battery life is impressive, too. I was able to go for more than two workdays on a single charge. This thing could stream the entire Lord of the Rings trilogy with a Hobbit movie thrown in for good measure. That Snapdragon hardware and Chrome OS software combines for a marathon travel machine.

…Not great as a tablet

The Duet 5 isn't effective as a tablet. The larger 13-inch screen and tiny bezels make it difficult to hold comfortably, even though it's a light tablet for its size. 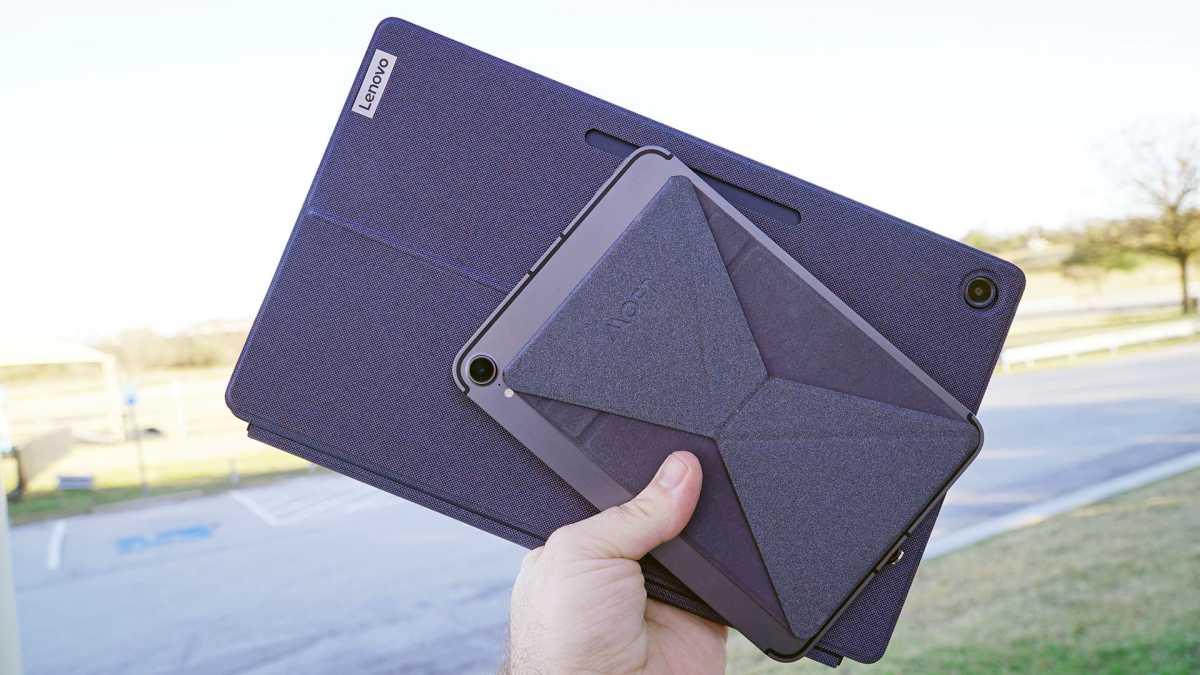 The 16:9 aspect ratio is pretty bad for holding, making it too wide or too tall for basic browsing. Games from the Play Store that would work fine on a phone are cumbersome to play in this form factor. Ditto for tasks like reading a book — after trying to use the Kindle app for a few minutes I reached for my phone instead, welcoming the option to use it with just one hand even on a relatively tiny screen. 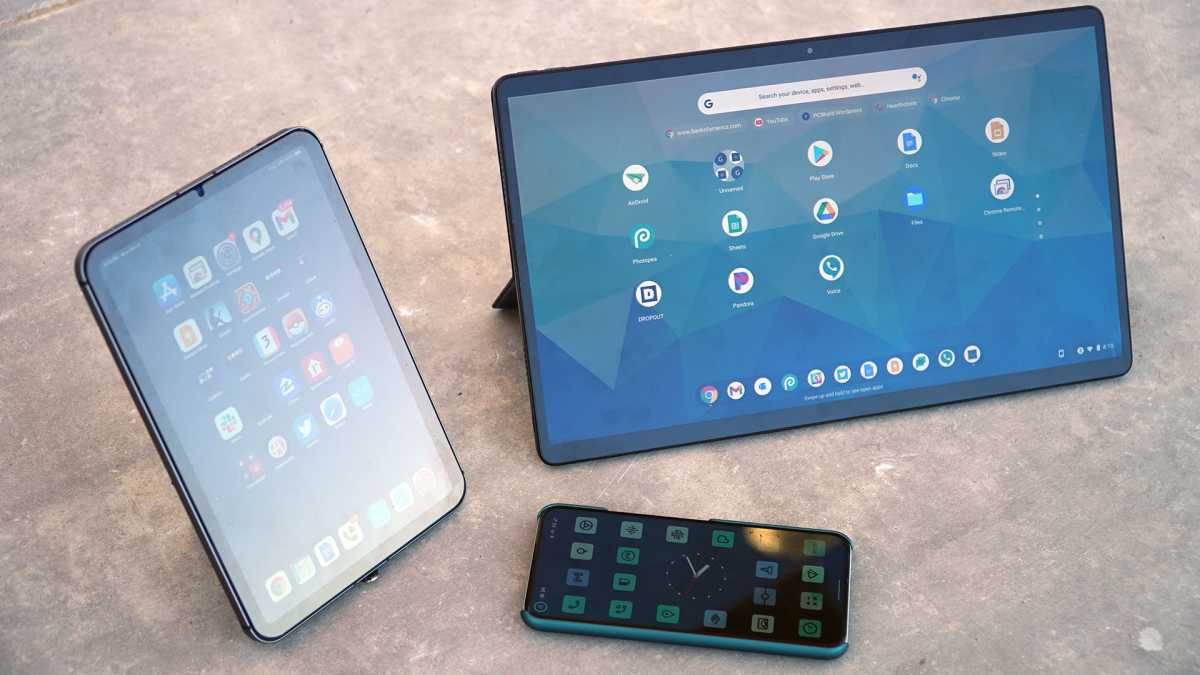 The 13-inch Duet 5 compared to the iPad Mini 6 and Pixel 5. It's freakin' huge! Image: Michael Crider/IDG

I suspect that Lenovo is saving money by repurposing a laptop OLED panel for this tablet design — the aspect ratio and resolution is a dead giveaway. Combined with the thin bezels that make it cumbersome to hold, these design choices push the Duet 5 much closer to laptop territory than, say, an iPad Pro or a Surface Go. This is a real bummer because the need to use a kickstand for real work with the keyboard limits its utility. While the folding, removable kickstand is fine at what it does, it makes the whole thing far less comfy to use on a couch or a bench.

The Chromebook Duet 5 is almost exactly what I asked for in a sequel to the original Duet. But, as it turns out, it's not what I wanted. It's still an excellent tablet, especially if you're looking for something that will outlast an intercontinental flight in terms of battery life. It will also play videos like a champion.

But the laptop-focused design — and that awkwardly wide screen in particular — means that the Duet 5 loses major convenience points as a tablet. If you're okay with using it like a laptop most of the time and accepting its shortcomings, it's still a fantastic deal for the hardware you get. But, for most users looking for something in this form factor and price range, I'd recommend a conventional Chromebook instead.