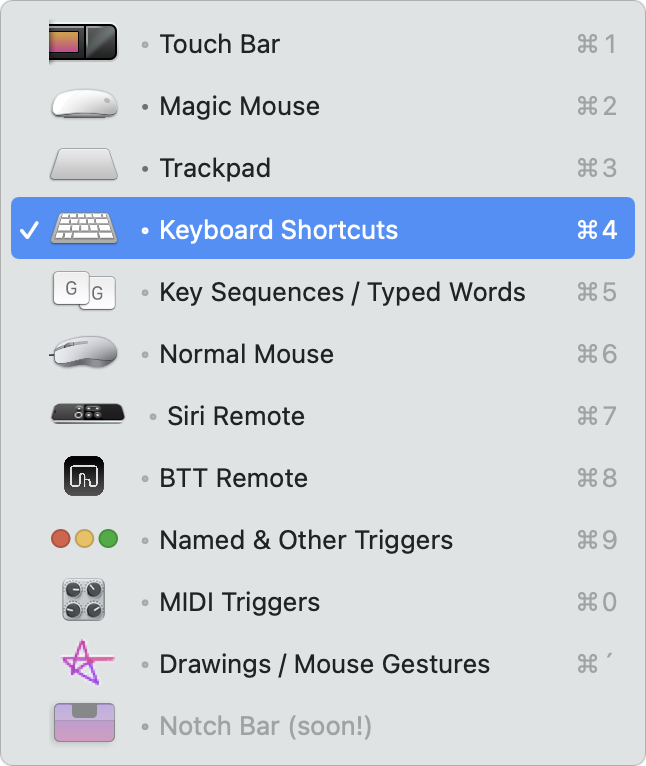 Triggers from a host of input methods can be used, including non-conventional methodsâ€”and soon, the Notch Bar on newer MacBook Pros.

Mag Gems focuses on tightly-scoped apps that fill in missing features in macOS. BetterTouchTool is no exception on either side of that equation: Apple would never, ever include the kind of extensible configuration for adding input shortcuts to provide the degree of power this app brings to your fingertips, gestures, and clicks, extending Apple's modest but incomplete set.

My only proviso is that you could fall so far down the rabbit hole of BetterTouchTool's incredibly deep and broad options for input triggers and actions that you might forget to get actual work done. Fortunately, it's as easy to add a few missing gestures as it is to build an entire ecosystem of Touch Bar buttons and Siri Remote actions.

I initially installed BetterTouchTool years ago when Apple discontinued the three-finger swipe up and down to simulate the Home and End movement keys. (It looks like that was in Mac OS X 10.8 in 2012.) The app was a simple and inexpensive way to regain gestures I used hundreds of times a day. That barely scratched the wax polish on top of the surface of BetterTouchTool. 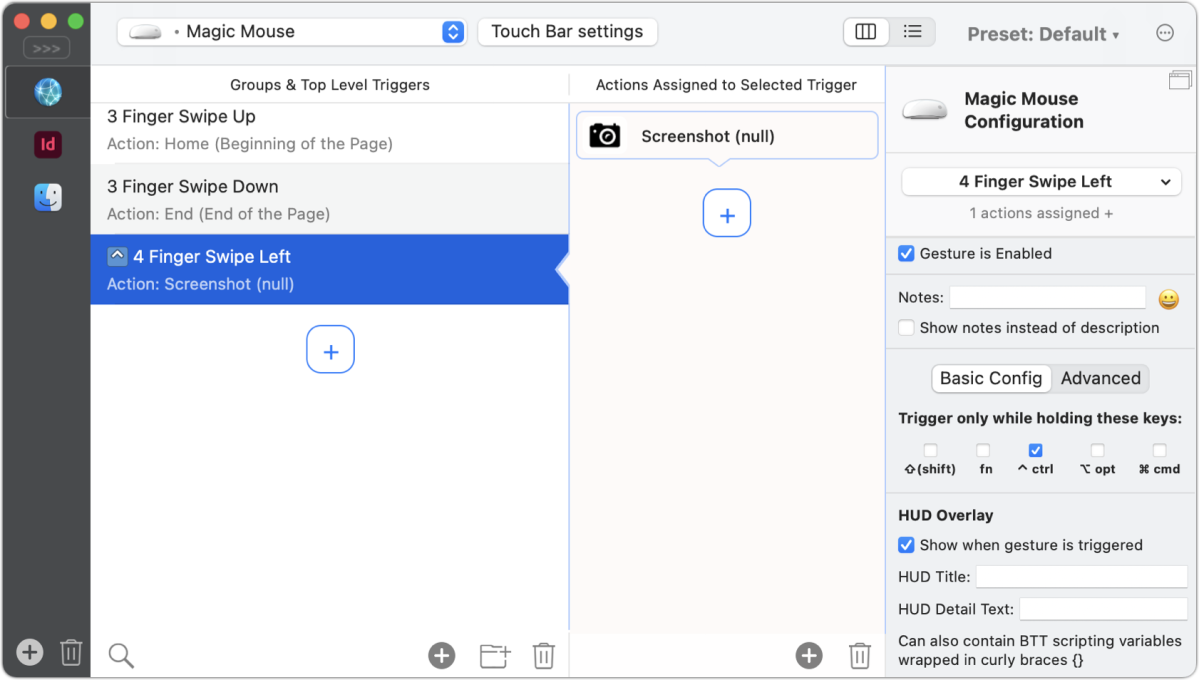 You can set up BetterTouchTool with useful gestures in a few clicks.

The app centers around input methods, assigning trigger sets to common items like a trackpad, Magic Mouse or trackpad, regular mouse, keyboard, and Touch Bar. But it can also accept inputs from a paired Siri Remote, MIDI triggers, key sequences (like a macro or shortcut app), and even things you draw. If that doesn't sound like enough, there's also BTT Remote, a way for the app to receive remote input through a free iOS app.

In the simplest case, you pick an input device, click + to add a trigger, and choose at least one action that occurs when that trigger fires. The number of actions from which you can select is fairly huge, drawn from navigation, typing, system events, Shortcuts, clicks, and much more. Fortunately, there's a convenient search field. You can also scope triggers to work only with a particular app in the foreground, in the Finder, or in all apps. 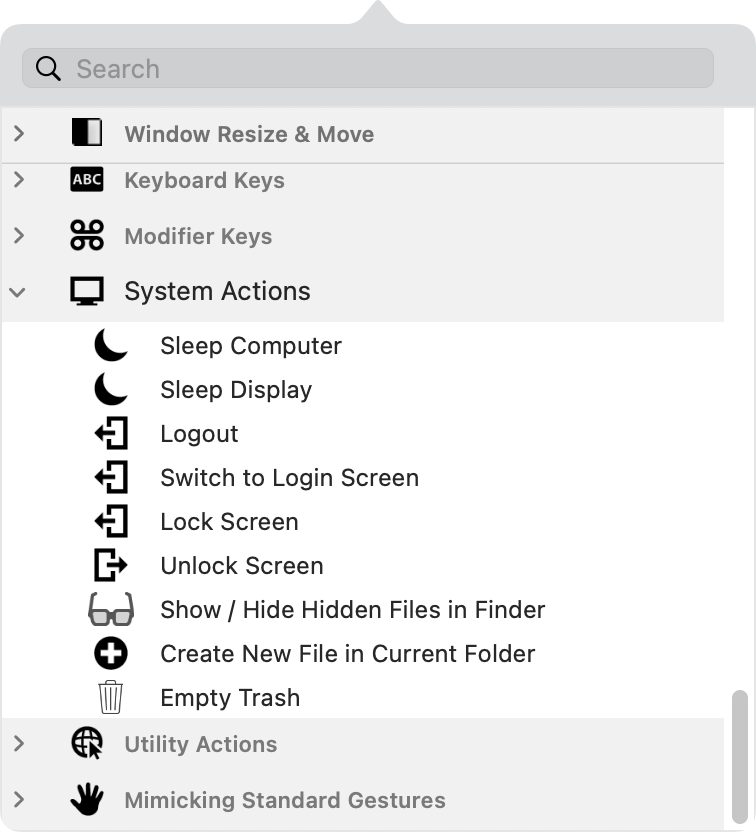 Almost anything can be an action, chained together with others.

Vastly more complicated sequences can be built to trigger and perform actions in ways that more closely resemble Keyboard Maestro (or the late, lamented QuicKeys), TextExpander, LaunchBar, and other automation and shortcut apps. Each of those apps has a significantly different purpose from BetterTouchTool, so it's more precise to say BetterTouchTool has a core competency around input methods, and intersects and overlaps with parts of the features of other common automation and workflow utilities. I would replace TextExpander with BetterTouchTool, but I sometimes have a choice between the two for a given purpose.

If it seems daunting to build extensive trigger/action sets from scratch for software you want to augment, an active user base at community.folivora.ai posts exported settings that can be downloaded and imported into your copy with a double-click.

The app's latest release, 3.600, brings it into full macOS 12 Monterey compatibility, including deep integration with macOS Shortcuts. For $9, you get two years of updates and a permanent license to the last version released in that period. A lifetime of updates is $21. The app is also available through a Setapp subscription.

BetterTouchTool is inexpensive enough to use for a handful of gesture or input additions, but powerful enough to build an entire universe of triggers and actions to customize macOS to the finest degree you could possibly desire. 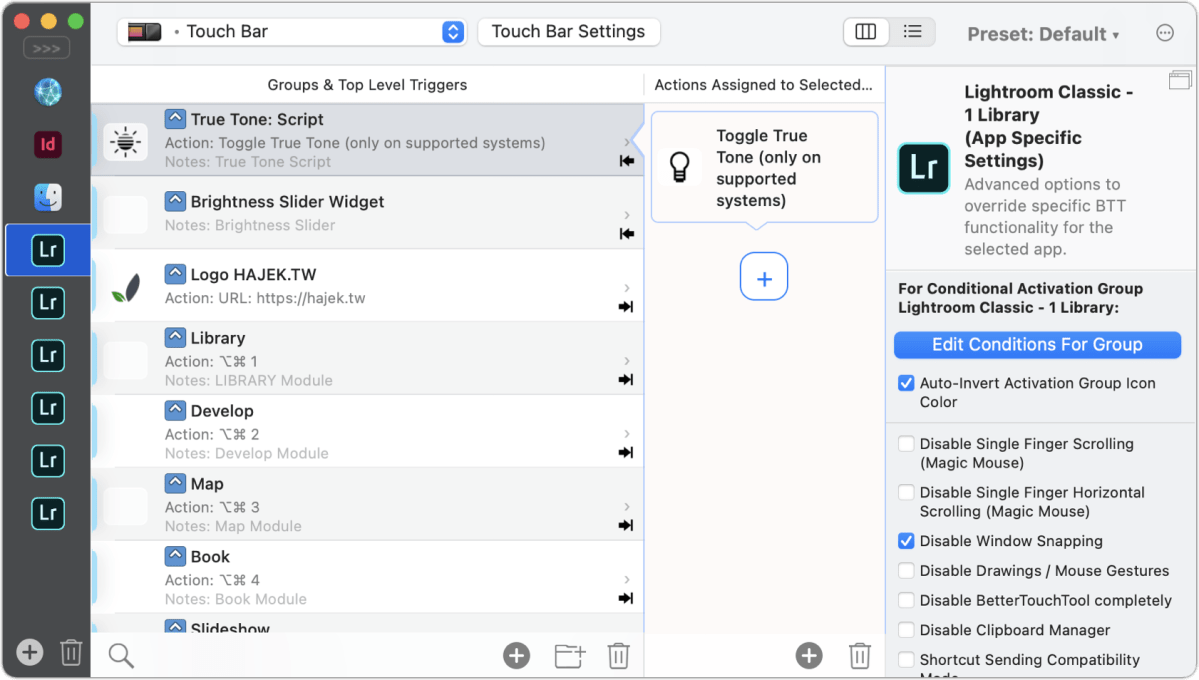 An active community uploads their own sets of BetterTouchTool triggers and actions, which you can add with a double-click.

Macworld mentioned BetterTouchTool in 2011. Rob Griffiths described using it with a new input device from Apple: For my needs, I've found that this combination of the Magic TrackPad, BetterTouchTool, and some utilities is the perfect mouse replacement.

Mac Gems highlights great nuggets of Mac software, apps that have a high utility, have a sharp focus on a limited set of problems to solve, and are generally developed by an individual or small company. With the strong resurgence of the Mac in recent years, we want to celebrate tools we use and that readers recommend to make the most of your macOS experience. Stay tuned for weekly updates, and send your suggestions to the Mac Gems Twitter feed (@macgems).