It's hard to gin up excitement over something so common as a power bank, but ElecJet's graphene-based charger just might you have thinking it's time to upgrade.

The ElecJet Apollo Ultra's graphene-composite design greatly increases the rate at which the power bank is charged as well as its service life. The Apollo Ultra is essentially a hybrid battery design using traditional lithium battery materials with graphene used to make the electrodes. Thanks to its higher conductivity, this means pretty insane charge and discharge rates compared to traditional lithium-ion power banks out there, as well as a far longer service life.

We don't normally cover Indiegogo products such as ElecJet Apollo Ultra 10,000mAh, but the chance to see a graphene composite battery in action made it worth breaking our guidelines. Graphene batteries today are still fairly rare, with Xiaomi's Mi 10 Ultra being the only mass-production device using graphene composite batteries that we know of. But clearly there's much interest in the technology, so consider this a preview of the future that may one day come to your device, too.

For this hands-on, ElecJet provided a pre-release sample. Two actually, as the first hand-assembled model didn't hit its claimed charge rates. A second version with updated firmware, which we based most of this preview on, did though. (We've also purchased a production unit to see if it matches our pre-release version.)

ElecJet's 10,000mAh Apollo Ultra looks like like any other power bank and includes a USB-C port for charging itself or a connected device, and a USB-A port. Unlike most low-cost power banks though, the Apollo Ultra's ports are very advanced and support a huge number of protocols.

The USB-C port, for example, supports the older Power Data Objects (PDO) power profiles as well as USB-PD 3.0's newer Programmable Power Supply (PPS) profiles. A picture is worth a thousand words, so you can see just how rich the USB-C port is in the image below.

We should note that certain newer phones, such as Samsung's Galaxy 10 series and up can only hit their Super Fast Charge 2.0 charge rates when using a charging brick or power bank that supports the newer PPS profiles. 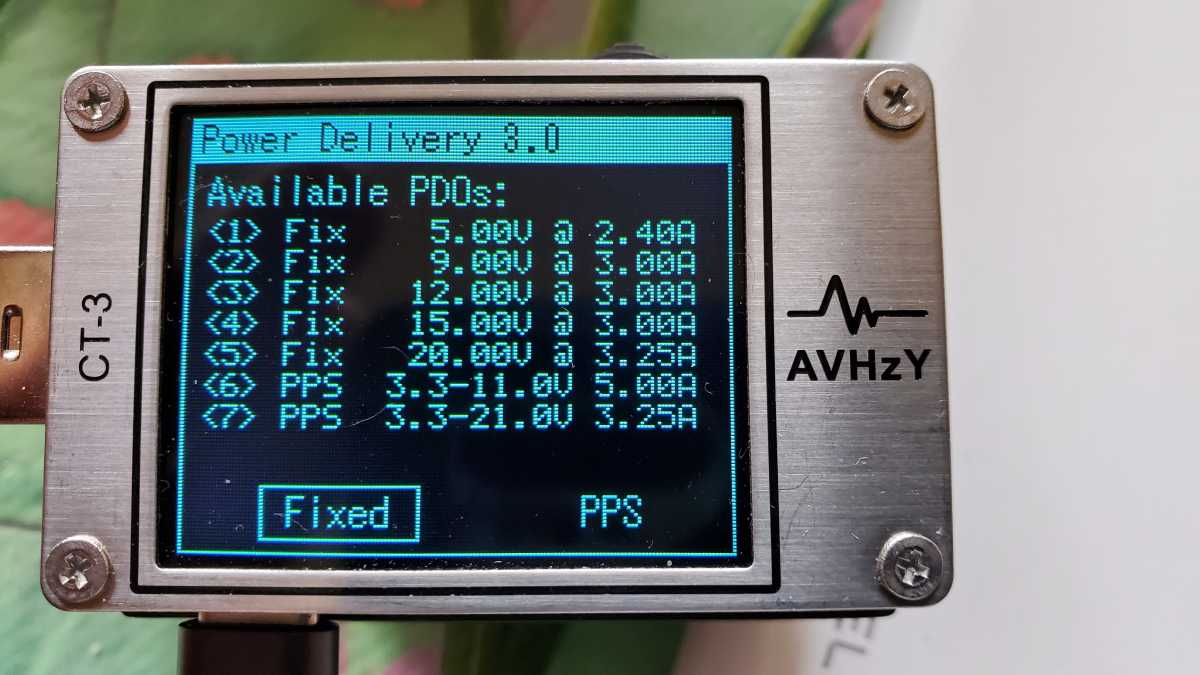 The Apollo Ultra's USB-PD charging profiles over USB-C is impressive.

Also impressive are the reported charge protocols the Apollo Ultra supports on its USB-A port. This is important as many devices rely on the older USB-A for their advanced charging. Most power bricks support only the basics: Apple's 2.4 amp, the basic USB BC 1.2 at up to 1.5 amps, and if you're lucky, Samsung's 2 amp spec.

The Apollo Ultra supports the basics plus Qualcomm's QuickCharge 3, QC 2, Huawei's FCP and SCP, Oppo's VOOC/Dash, and more. You can see it all in the image of the reported support from the USB-A port below. The TLDR is that Apollo Ultra is likely to charge your phone— even your weird model—at the fastest rate possible even over USB-A, through its rich protocol support. 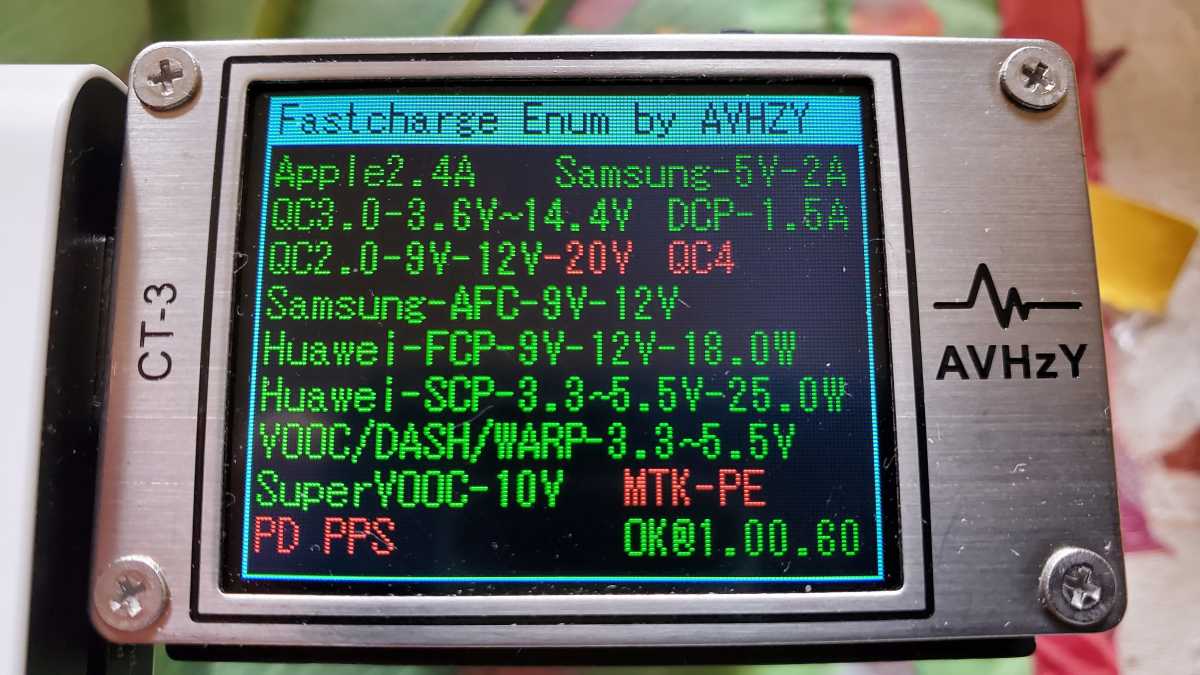 By supporting all of these protocols–even the weird ones–the Apollo Ultra is likely to charge your phone at its fastest rate even over USB-A.

The main reason we are here, though, is to see if this graphene battery is really all that. ElecJet specs the power bank as being able to hit a full charge within 27 minutes. To test that, we discharged the pack to its lowest state (the cut-off is 10 percent) and then used an ElecJet 100-watt GAN USB-C charger and the Apollo Ultra's supplied 3.3-foot USB-C USB 2.0 cable to charge it while logging the charge rate. You can see the chart of its charge rate below, where the Apollo Ultra charges at a break-neck 83 watts until hitting 90 percent—and then gradually lowers the input charge rate of the battery. This is a pattern you see on most advanced charging devices and helps preserve the health and life of the battery. It's basically hecka fast.

It's so hecka fast, in fact, that we suspect ElecJet added a decimal point to the LED display just to emphasize that point. You can literally watch the counter tick up in real-time. We know you don't believe us so we made a GIF as proof, which you can see below. No, it's not sped up; this is in real time.

Yes, the ElecJet Apollo Ultra really charges so fast they added a decimal point to the LED readout.

One of the concerns people have with such fast charging rates on a power bank is the danger from overheating. Graphene high conductivity is supposed to help reduce that worry though, and that seems to bear out in our tests. You can see a thermal image of the Apollo Ultra while being charged on a fairly warm day at 83 watts to see where the hot spots are. Keep in mind that thermal imaging isn't the most accurate method to record temperatures, but it passed the most important test there is: We could touch it without any discomfort.

The graphene technology inside the Apollo Pro allows it to charge very fast without getting dangerously hot.

Interestingly, ElecJet specs the USB-PD port up to 65 watts output despite its ability to be charged at 87 watts. This may have something to do with reserving 18 watts for the USB-A port, but it's likely to confuse some people, so we'll say it again: You can charge at up to 87 watts, but the USB-C port only supplies up to 65 watts. That's probably OK though because 65 watts is plenty, and it's possibly the only power bank we've seen that will let you actually run a laptop like the Dell XPS 13 or MacBook Pro 13 with a dead battery as if it were plugged into the wall.

The biggest problem running your laptop this way is that 37 watt hours (with only about 27 watt hours accessible) isn't much. With a charge circuit and graphene battery this advanced, it feels like perhaps doubling the capacity would make it more useful for laptop users. For a phone or tablet though, it's fine.

Pushing up its capacity would also make it heavier, and at 8.8 ounces, it's already fairly hefty compared to other power banks with similar capacity. For comparison, the Apollo Ultra is about 25 percent heavier than a 10,000mAh Mophie PowerStation PD XL. A higher capacity would make it more expensive too. At $65 on Indiegogo, and its retail price expected to be higher, it's extremely pricey for the capacity. For example, the above-mentioned Mophie Powerstation PD XL goes for $25 on Amazon, which is pretty typical of name-brand 10,000mAh power banks.

Whether the Apollo Ultra is worth the premium price very much depends on how much you value fast charging for your device. One last thing that might convince you that it's worth the investment is the graphene power bank's duty cycles. All batteries have limited life spans and you've probably experienced that with your heavily used power banks no longer holding a charge after a couple of years. While most conventional batteries might give you a few hundred cycles, the graphene battery in the Apollo Ultra should reach 2,500 cycles. So, over its life span, it may pay off.

Is graphene the future? We hope so

Beyond the Apollo Ultra though, it's exciting to glimpse what is sure to eventually make its way to the mass market of phones, tablets, and laptops. Modern-day laptops already charge at near insane speeds. Lenovo's ThinkPad X1 Carbon has long been able to go from empty to 80 percent in 30 minutes. Seeing what the graphene battery in the Apollo Ultra can do, it's pretty exciting to think about plugging in your dead laptop and having it at 80 percent of its capacity in, say, just a few minutes. We simply can't wait.

The ElecJet Apollo Ultra is heavier, larger, and more expansive than most USB-C power banks, but it's also far more advanced and far faster too.