Most computers and storage drives still use the common SATA or PCIe 3.0 interfaces to sling your bits of data around, but if you're lucky enough to own a relatively modern PC, you might be able to upgrade to a solid-state drive (SSD) built on the insanely fast PCIe 4.0 protocol. We've tested several PCIe 4.0 SSDs, and the best one to cross our labs thus far is the Samsung 980 Pro in a field of tough contenders.

The Samsung 980 Pro is a great NVMe SSD—the fastest we've ever tested using the PCIe 4.0 bus, we said in our review (though it has since been unseated by the far pricier Seagate FireCuda 530: review here). If you're lucky or smart enough to own a late-gen Ryzen system, it's the one you want. 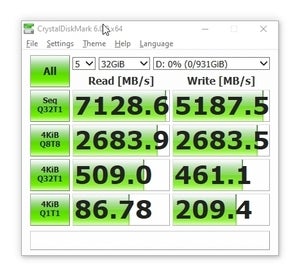 Normally we don't show CrystalDiskMark results as screen grabs, but this is so impressive we had to. Amazing.

PCIe 4.0 SSDs are more expensive than their PCIe 3.0-based rivals—the Samsung 980 Pro costs US$120 (AU$155) for 500GB and US$181 (AU$259) for 1TB of capacity on Amazon—but the difference in performance can melt your face. Traditional SATA SSDs top out at around 600 megabytes transferred per second, while our favorite PCIe 3.0 NVMe SSD, the SK Hynix Gold P31, ups that to 3.5GBps read and write speeds. The Samsung 980 blows both of those out of the water, exceeding 7GBps read and 5GBps write speeds in our synthetic tests. Truly remarkable.

Those fantastically fast speeds make the biggest difference during file transfers. If you move a lot of data around, you'll love the Samsung 980 Pro, which can blaze through those tasks before you know it.

If you mostly stick to gaming and normal day-to-day tasks, however, you may be better off with a standard SATA or PCIe 3.0 drive. Upgrading from a pokey mechanical hard drive to any SSD can give you a big quality-of-life increase with faster boot speeds, game loading times, and application performance. Most of those crucial benefits don't get tangibly faster if you opt for a PCIe 4.0 model over a slower (but still fast) SATA or PCIe 3.0 drive—though that could change when Microsoft's radical, Xbox-inspired DirectStorage API rolls out for Windows games later this year.

Fear not: Modern PCIe 4.0 SSDs won't die on you more quickly despite their blistering speeds. The drives carry a five-year limited warranty, we said in our 980 Pro review. The limit is 150TBW per 256GB of capacity rating. TBW stands for TeraBytes Written over the life of the drive. That rating is a bit low for a premium-priced drive. Still, it represents 41GB written per day over 10 years—a lot more data than the average user will write (reads don't count).

The 980 Pro's benefits don't end there. Samsung's Magician suite of tools and features remains one of the best SSD management applications around.

Samsung's 980 Pro blows away every standard NVMe SSD we've tested when used in conjunction with PCIe 4.0.

While the Samsung 980 Pro is the best PCIe 4.0 you can buy, we've reviewed other exceptional options as well. The Sabrent Rocket 4 Plus NVMe SSD actually bests Samsung's drive in some tests and comes in a gargantuan 4TB version. You can buy it for US$180 (AU$270) for 1TB, US$359 (AU$480) for 2TB, and an eye-watering US$900 (AU$1,199) for 4TB. The WD Black SN850, on the other hand, compares pretty closely to the 980 Pro. Samsung's SSD costs slightly less for some capacities however, and is the better all-around performer, but by a rather slim margin. That combination gives Samsung the edge. And the Adata XPG Gammix S70 Blade goes toe-to-toe with the 980 Pro with prices to compete, though given Adata's recent decision to silently update some SSDs with slowerinternals, we're still giving top honors to Samsung.

The aforementioned Seagate FireCuda 530 actually outpaces all these options. It not only bested the best of the rest in our real-world and synthetic benchmarks, it did so by a healthy margin in several tests, we said it our review. You pay substantially more for that performance, however, at US$132 (AU$232) for 500GB, US$255 (AU$397) for 1TB, and US$540 (AU$644) for 2TB models. You can also get a massive 4TB version for a just-as-massive US$1,000 (AU$1,556) price tag. Most people don't need this much speed, though, and thus shouldn't spend that much even for the ultra-fast FireCuda.

Bottom line? The Samsung 980 Pro is the best PCIe 4.0 SSD for most people, if you can benefit from PCIe 4.0's blisteringly fast speeds. Be sure to check out our guide to the best SSDs for a wider look at all types of solid-state drives, along with practical buying advice to keep in mind while you're shopping on your own.

Read more: Is the new Samsung Galaxy S21 FE 5G worth it?