Not to worry. You can figure out a good PSU match on your own. All you have to do is settle on the key specs needed for your build, then go hunting for specific models that fulfill those criteria. We've listed and explained them below, in the order of most important to least important for gaming builds. Some of these relate to practical concerns, like having enough power, but others take into account aesthetics as well.

> Not building a gaming PC? You may find our general advice on buying a power supply more helpful.

A power supply's number one job is to provide enough power for a PC's components, no matter what type of computer you're building. But calculating that number takes a bit more math than looking up the TDP (thermal design power) spec for each component, adding up those wattage numbers, and then buying a PSU close to the total.

You need more wattage than that. A surplus, commonly called headroom, allows your power supply to run at peak efficiency. It also gives you the ability to add parts or upgrade to components with higher power requirements (or both), depending on the amount of headroom you go for. 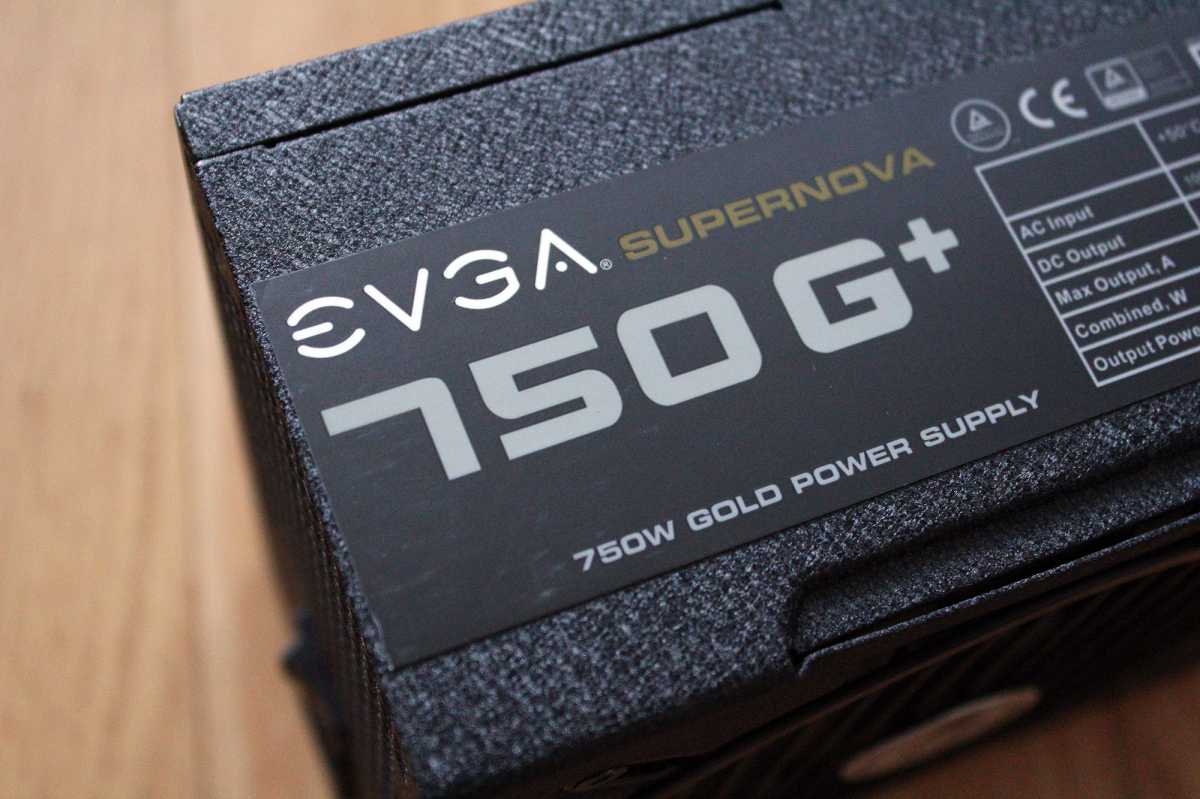 This 750W power supply is ideal for an upper mid-range or lower high-end gaming PC.

So how much headroom should you target? That depends on your current budget and your future upgrade plans. Your baseline will be a range of 40 to 80 percent of the wattage rating—you should stick within those boundaries for peak efficiency. Pick the lower end of that if you intend to overhaul your rig with a much beefier CPU-GPU combo down the road and don't want to buy a new power supply to accommodate those changes. (This strategy works best if you plan to do those updates within the PSU's warranty period.) Choose the higher end if you don't plan to do power-hungry upgrades or reuse the PSU in a new build with more powerful hardware.

An old-school rule of thumb is to aim for 50 to 60 percent use of the wattage rating. You'll have plenty of room for upgrades, and you won't have to worry about the effect of ambient temperatures on actual amount of power available. Many modern builders don't like such a large buffer, though, citing improved power efficiency in PSUs (see below). Neither attitude is inherently wrong. It doesn't hurt to be closer to 40 percent usage than 80 percent—you won't draw more power at the wall with a higher wattage PSU. That's based on what your components actually pull, not the wattage rating. But you can end up overspending on something you don't make full use of. 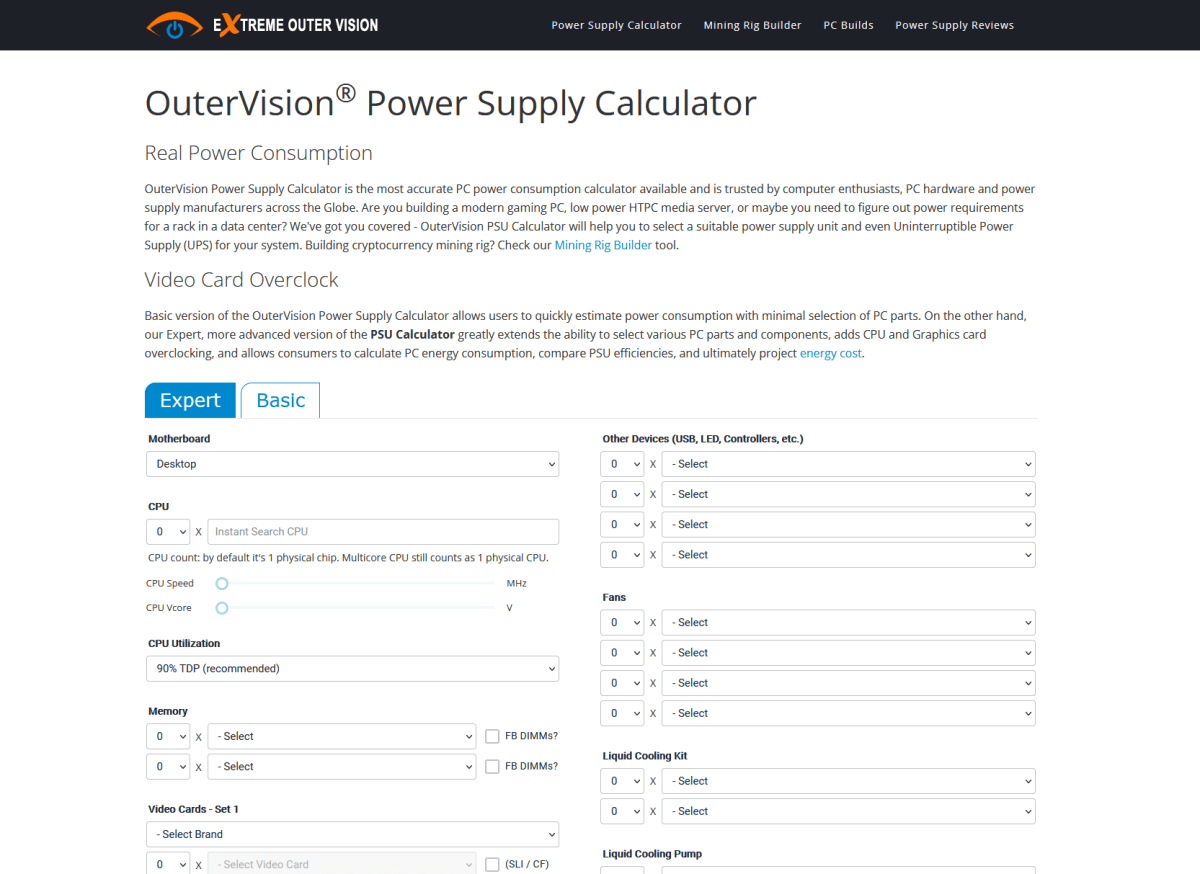 If you use Outervision's popular online calculator to do all this math for you, you'll encounter the modern attitude. For more headroom, simply go for a power supply with a higher wattage. We suggest padding the headroom when working with cheaper power supplies or living in an area with hot weather.

Here's how this shakes out in a concrete example: After doing the math yourself (or consulting an online calculator), you find out your system's total draw is 300W. If you're on a budget with modest hardware, you could buy a cheaper 500W power supply, like the EVGA 500 W1. Got a little more cash? You can also go up to a 750W power supply, like the Cooler Master Masterwatt 750, and ensure that you'll have the power needed for a later jump up to a high-end graphics card. (You know, when they're widely available again.) 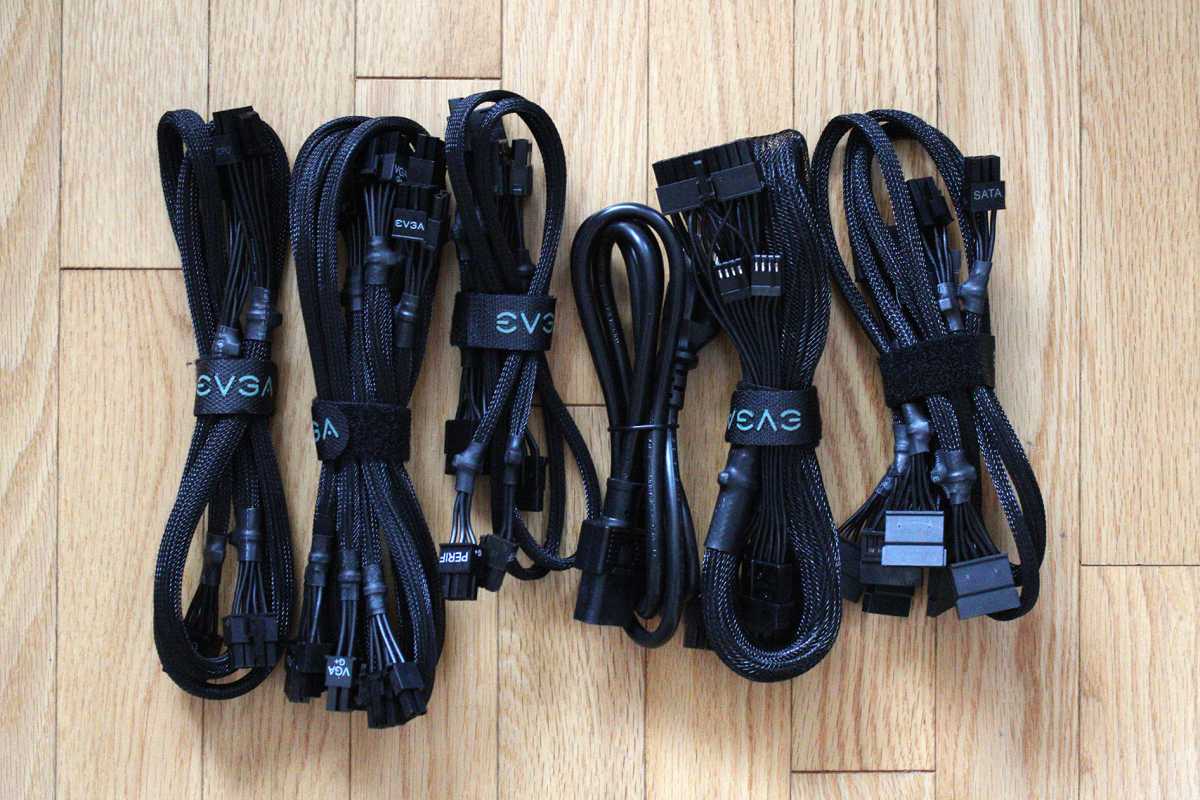 The more cables you have available, the more flexibilty you have for your build. (But the more room you need, too.)

Usually the lower the wattage of a power supply, the fewer power cables it has. Go low enough and this point is a bit moot—g enerally, systems requiring a 400W or lower PSU just don't have enough components to need a ton of power cables. Cost also influences the number of cables. Pricier models generally offer more.

You have to be most attentive to this point when attempting to cram a bunch of parts into a PC while also not spending a lot on a power supply. Go too low and you just won't have enough cables for everything you plan to put in your system. Sure, maybe your wattage requirements are met, but imagine this scenario: Your graphics card and sound card both require additional power, but sit at a wide distance from each other on the motherboard. If you only have one PCIe cable, you're going to be in a bind. (Plus, it's not ideal running those on the same cable anyway.) This example is for a lower-end build, but you can encounter this issue in higher-end projects, too.

Avoid this problem by going over your list of parts and tallying how many cables of each type you'll need. Factor in any future upgrades you're anticipating, too—for example, going from a graphics card with a single 6- or 8-pin connector to one with two power connectors. You can run a graphics card on one cable, but if you live in a warm climate, it may be optimal to use two separate cables for each connector to reduce the risk of the cables overheating.

You can see the difference for yourself by comparing several PSUs. For example, the Cooler Master MWE Bronze 500 offers just five cables: one each for ATX 24-pin (motherboard), EPS 8-pin (CPU), Molex (fans/accessories), SATA (storage/optical drives), and PCIe 6+2 (GPU/expansion cards). Go up in wattage to the Cooler Master MWE White 550, and you get an additional SATA and PCIe cable. But increasing wattage doesn't guarantee more cables—the dirt-cheap EVGA 500 N1 has just one PCIe cable (and a piddly two-year warranty).

Power supply efficiency tells you how much actual power you can expect to get from a power supply. While the wattage tells you the theoretical amount provided, the power efficiency rating indicates how much power you should expect to have after losing some to heat and other causes.

These days most everything is 80 Plus-rated or higher. At minimum, these power supplies provide 80 percent of its advertised wattage at 20-, 50-, and 100-percent load. (That's the metric by which the rating is measured—you can read more about how this system works in our explanation of power supply efficiency ratings.) As the ratings improve, the efficiencies improve. For example, 80 Gold PSUs should provide 87 percent of the stated wattage at 20 percent load, 90 percent at 50 percent load, and 87 percent at 100 percent load.

This chart shows how much power is supposed to be provided at 20, 50, and 100 percent load for the various 80 Plus ratings.

Stick to 80 Plus, aka 80 Plus White, as the lowest rating worth considering. Step up from there based on the level of your build and your budget. We recommend 80 Plus Bronze as a starting spot, since you can often get those models on sale for the same price as an 80 Plus alternative. You can move up to higher efficiencies to compensate for the effect of hot climates or help keep electricity costs down if your rates are high. But be aware that not all PSU models will hit their marks equally. For a clearer picture of which come out on top, look at the performance reports on the website of the group that issues 80 Plus certification.

Power supplies come in two flavors for how their power cables attach: modular and non-modular. Modular power supplies have completely removable cables, while non-modular PSUs do not. The cables on the latter are installed in a way that is fixed.

Predictably, modular power supplies cost more, but they have two advantages over non-modular models. First, you don't have to plug in all the cables, which reduces how much bulk to deal with in limited space. Second, you can upgrade your PC's look by using fancier, individually sleeved power cables, either as part of a pre-made set sold by the same manufacturer (like Corsair offers) or from a third-party that specializes in selling such cables in custom lengths (like CableMod). Those cool, sleek-looking PCs you see on Reddit and forums? They use individually sleeved cables. 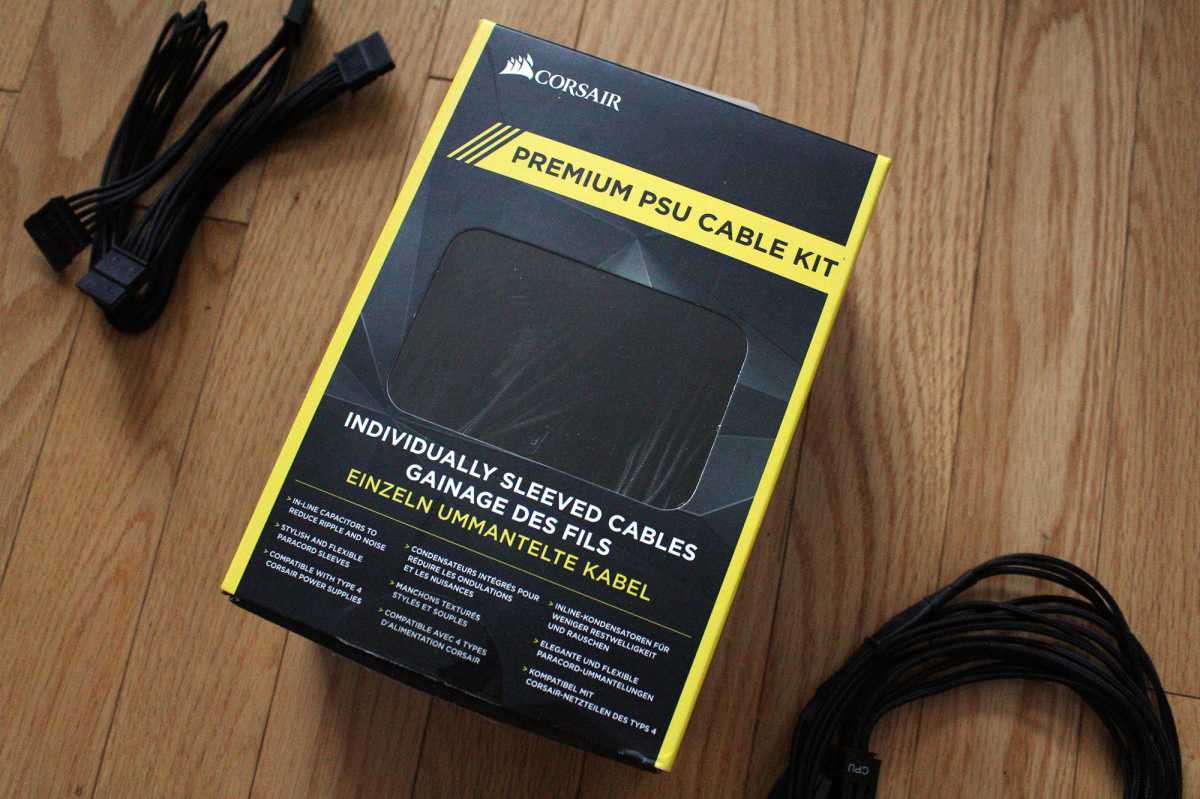 Some PSU manufacturers sell sleeved cable kits if you want to get fancy in your build. You can also buy these through third-party sellers.

Non-modular power supplies have an inverse set of advantages and disadvantages. Mostly you'll choose between these two types based on several factors: your budget, the amount of space in your case for spare cables or unused length, and your aesthetic priorities. 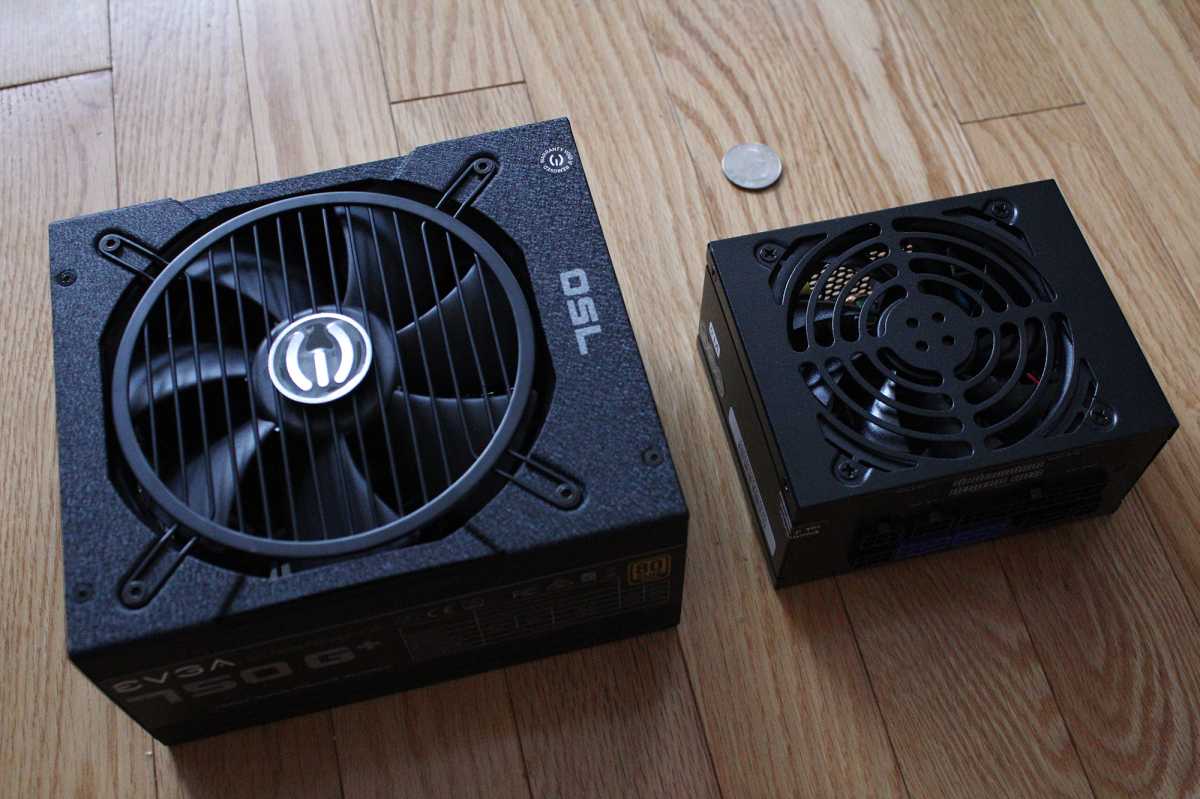 The size of your power supply matters for two reasons: It needs to be compatible with your case. And it affects how much physical room you'll have for the cables attached to it.

The length of your power supply may matter, too. This is usually relevant when you have a high-wattage power supply (usually over 850W) in a compact case, or even a less beefy ATX power supply in a small form factor case (under 20L). You can end up with not enough room for the power supply and storage of excess cable lengths. Selecting a compact ATX power supply (when applicable) and/or buying custom-length cables can help.

Whenever possible, check the length of the power supplies you're interested in if you're planning a build with limited space. If not available on the product's webpage, contact the manufacturer or look for reviews. Cross check the info you get against the clearance listed on your case's product page or in the manual. 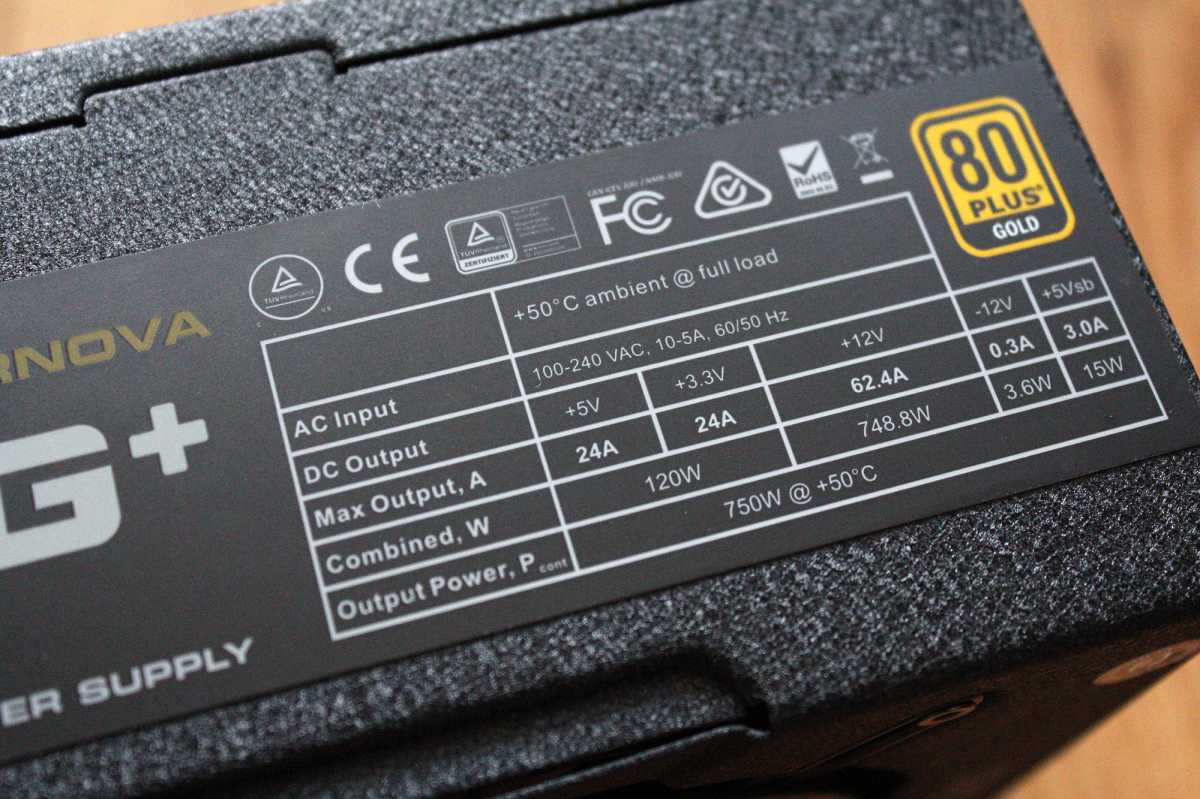 Power supplies with more than one 12V rail usually list each one's output info separately (e.g., +12V1 and +12V2). This PSU has only one 12V rail, which is common these days.

The rails in a power supply are the individual wires that carry different DC voltages—when the power from your home gets converted from AC, your power supply splits them into 3.3V, 5V, and 12V DC. The components in your PC draw from those rails, with the power-hungry parts like your processor and graphics card reliant on 12V.

In the old days, you more often found power supplies with multiple 12V rails. Such a feature allowed you to plug a power-hungry GPU (or multi-GPU setup) into separate rails, in order to reduce the amount of heat a single wire has to endure. That in turn increased safety and preserved the longevity of the PSU.

These days, having multiple 12V rails in a PSU doesn't matter—n ot for the overwhelming majority of gaming PCs, anyway. Today's graphics cards don't draw as much power, and multi-GPU setups are all but dead. (The people rocking two RTX 3090s in a single PC are an extreme minority—and they know to look to the highest-end PSUs for models that offer multiple 12V rails, anyway.) Pair that with the fact that most power supplies sport a single 12V rail, and it becomes a moot point.

If you're concerned about 12V rails because you heard it was part of running two separate cables from your power supply to your graphics card, you can still use multiple cables. The benefit is a reduction in heat going over those cables, which can be useful in hot climates. But as we explain in our article about using one power cable vs. two for a graphics card, that's the only main benefit to expect.