Apple's new iMac may be the first Mac really designed around Apple's own silicon, but it certainly won't be the last. Already, reports and rumors have started laying out where Apple's processor roadmap could take this 40-year-old product line over the rest of the company's transition from Intel's chips.

But now that the 24-inch iMac out in the world, eyes have turned upward, awaiting the other piece of falling footwear. It seems clear that this new, colorful model replaces the 21.5-inch model that held down the lower cost, lower performance end of the company's all-in-one desktop line, which means that—like the M1 MacBook Pro before it—there's probably a corollary waiting in the wings: a more powerful, bigger iMac.

And while we can make some suppositions about what such an iMac might include based on what we see in the 24-inch model, it's just as instructive to look at what's missing from this low-end iMac to see what might be in store for the next model.

Any ports in a storm

In some ways, this 24-inch iMac harkens back to the original Bondi Blue model. Not just in terms of the price point ($1,299) or the colorful exterior, but also in terms of connectivity. Back in 1998, that original iMac eschewed all of the existing standards from Apple's computer line up until that point in favor of a then-newfangled technology called USB.

More than two decades later, those rectangular USB-A ports have become ubiquitous and are only lately being supplanted by the newer USB-C. And, just like the 1998 iMac, that's all the base-level 24-inch iMac has: two USB-C ports. (Go up to the $1499 and you also get two Thunderbolt ports, which use the same connector as USB-C but provide much faster speeds, and yes, it is a bit confusing.) 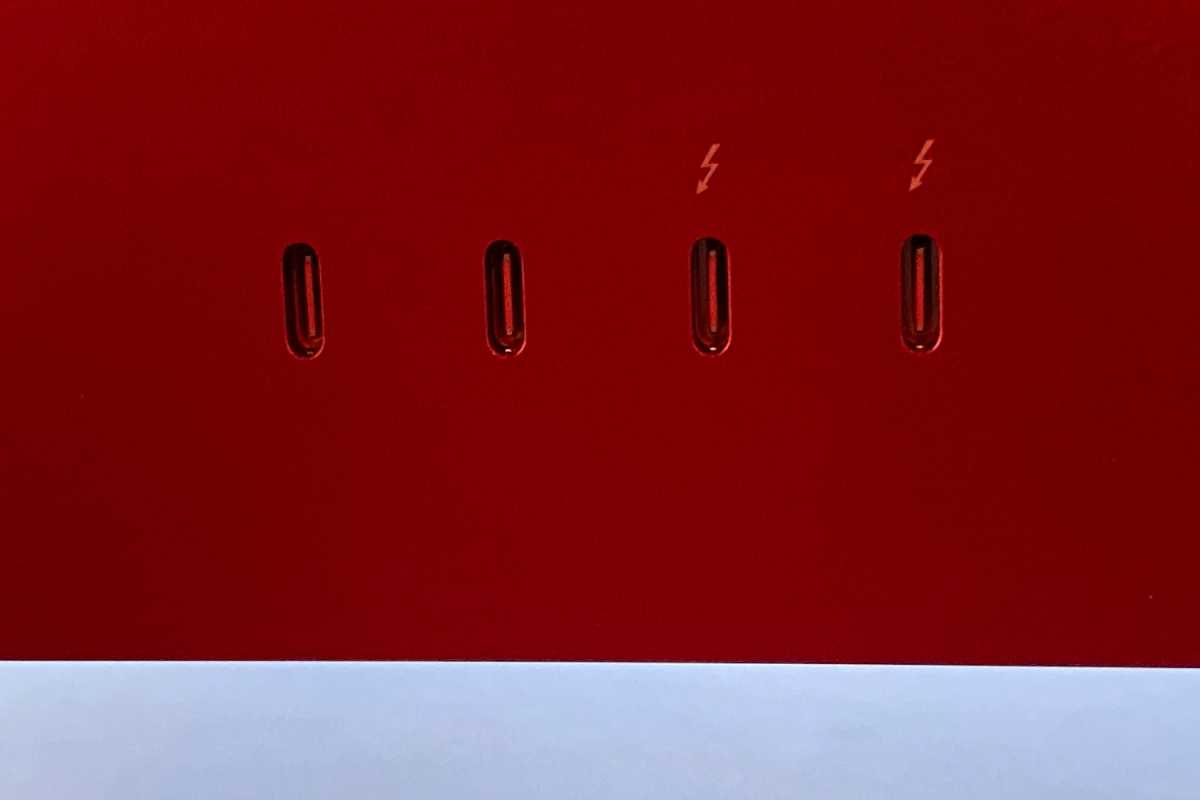 The $1,499 and $1,699 iMacs have four ports, but you'll need adapters or a dock to connect different types of devices.

But users of more powerful Macs are accustomed to a lot more connectivity, and it seems likely that a larger, high-end iMac would deliver on that front. Rumors suggest features like the SD card slot might reappear, and that more Thunderbolt ports might be available as well. The 2017 iMac on my desk boasts four USB-A ports in addition to two USB-C ports—the real question is whether a larger iMac will match that or might be restricted to fewer ports, even if there are more than you'll find on the 24-inch model.

One thing I wouldn't expect built into the larger iMac's chassis? Ethernet. Apple moving the Ethernet port to the power brick for the 24-inch model seems like a harbinger, not a one-off. After all, the company didn't design that fancy magnetic power connector that can also carry data for just a single model.

The 12.9-inch iPad's new XDR display is easily the envy of every other device in Apple's lineup, but it probably won't have a monopoly on it for long. Just as the company transitioned from CRT to LCD and LCD to Retina, XDR seems like the next major jump. The question is: will the company make that jump with the high-end iMac?

It certainly seems plausible: between the 12.9-inch iPad and the Pro Display XDR, the company is clearly targeting its professional power users as those most likely to both covet and appreciate this new display technology—and to shell out the price premium it brings with it. If the 30-inch iMac is indeed intended to appeal to a pro user working on video or graphics, then Apple would want to make it available with the best display possible. 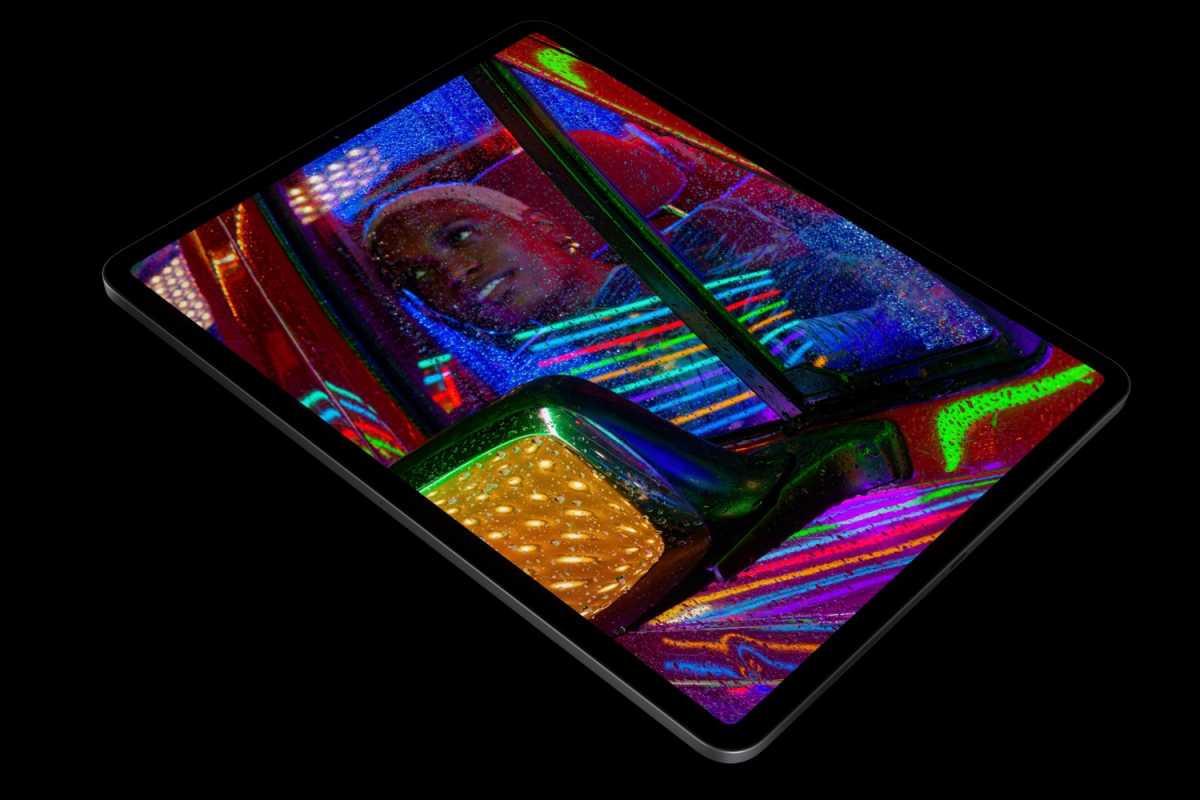 A bigger iMac could be like the 12.9-inch iPad Pro and offer an XDR display.

That said, it also seems possible—and, especially given supply constraints and the current manufacturing costs, likely—that the XDR display might not be available on all the larger iMacs. Apple could easily roll out two models with the same display size: a better model with the same 5K Retina display in current iMacs, and a best model with the new XDR display at a higher price. (Here's hoping that a bigger iMac might even have an adjustable height stand, though I'm not holding my breath.)

While the 24-inch iMac is built around the same M1 processor used in the MacBook Air, MacBook Pro, and Mac mini introduced last fall, it's pretty much a lock that a larger, higher-end model would use an even newer piece of Apple silicon—though whether that's an M1X or an M2, well, that remains anybody's guess.

The reasons are simple: with its ability to drive just two Thunderbolt ports and only support up to 16GB of RAM, the M1 just isn't going to cut it for those customers who are in the market for a powerful, high-end machine. And it's not like Apple's going to maintain that a 16GB cap is perfectly fine for all of its customers—after all, previous iMacs and the iMac Pro let users upgrade to 128GB or 256GB of RAM respectively. Apple's new unified memory architecture is impressive, for sure, but even it's no substitute for eight or sixteen times as much RAM.

Rumors already suggest that the chips due for Apple's upcoming high-end MacBook Pro will feature eight high-performance cores, twice as many as in the M1, and it seems probable that a larger iMac would use the same processor.

With all of these possibilities hanging just over the horizon, it can be difficult to keep the eagerness in check. But one big question lingers: when exactly will we see this larger iMac? Obviously, Apple's keeping the details under wraps, though the smart money says probably not before this fall. So all we need to do in the meantime is not succumb to the siren song of that beautiful 24-inch iMac—easy, right?