Apple's update in 2018 of its streaming audio and video standard to AirPlay 2 allowed picking multiple simultaneous audio-streaming destinations while playing audio or video. In iOS and iPadOS, AirPlay 2-capable devices originally appeared in the list of available destinations with a circle (or radio button) to the right of their name, indicating they were available as part of a multiple selection.

Apple changed this behavior in iOS 14.2 and iPadOS 14.2, which you may not have noticed unless you regularly use multiple outputs. That release also added automatic AirPlay 2 grouping, and better previews and access to the different controls in iOS and iPadOS for playing audio and video on the device itself while controlling or seeing what's playing on HomePods and Apple TVs on your local network.

Tap the AirPlay icon to reveal the list of destinations. If you're not currently streaming to an AirPlay target, you see iPad or iPhone selected at the top of the list, and then the label Speakers & TVs, beneath which you see all your AirPlay options. This can include Bluetooth speakers, HomePods, smart TVs, smart stereo receivers, Apple TVs, and other devices.

It's unlikely that all the equipment you own was updated to AirPlay 2 or includes AirPlay 2 support. (Check on smart TVs and other third-party electronics for firmware updates, though; some enabled AirPlay 2 through a free update.) But if you tap to select any destination that does handle AirPlay 2, it will add a circle to its right with a checkmark it, and all other AirPlay 2 devices on the network will suddenly shown unfilled circles to their right, too. You can then select one or more of those, and audio will stream to all of them at once. 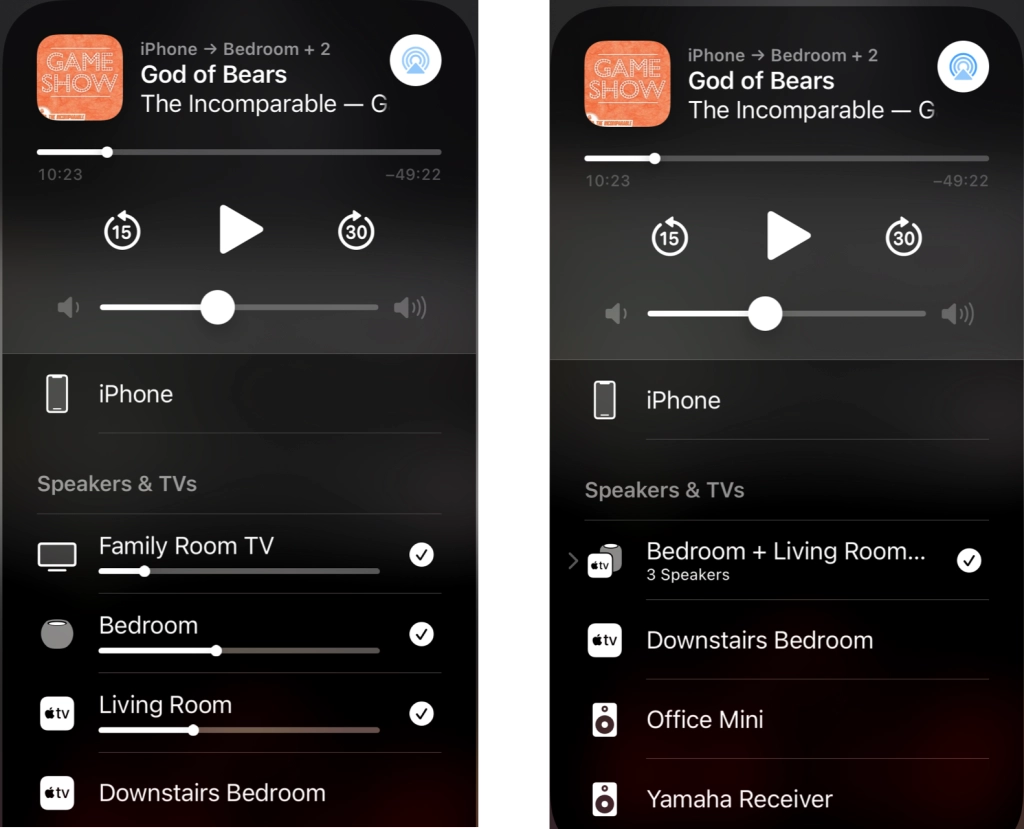 Tap one AirPlay 2 destination in the AirPlay selection list and you can then select more (at left). Once selected, iOS/iPadOS collapses your selections into an automatic group (at right).

Once you select two or more devices, you can use a volume slider for each to balance outputs from your iPhone or iPad. However, after a few seconds, the volume sliders disappear and the group of devices you selected automatically collapse into a group that's labeled with some of their names, and which lists the number of speakers beneath the group (no matter what kind of A/V devices they are).

The icon to this group's left is an overlap of their AirPlay icons, and to that group's left, a subtle right-pointing arrow that indicates you can tap the group to expand it. Do so, and you can adjust volumes and tap checkmarks to remove them from the group. These groups are dynamic and disappear when destinations options change on the network or you pick other media or apps on your iPhone or iPad.

You can also just tap the AirPlay button in the media player view, and select your iPhone or iPad to stop streaming to a group or an individual AirPlay target.