We have all known the frustration of being told to press Control-Option-Command-Shift and some other letterâ€”most of us don't do daily finger exercises to prepare for such nimble maneuvers. Apple's Sticky Keys option can help with that. An adjacent feature, Slow Keys, can assist when your typing style and your actual results are out of sync.

Both features are found in System Preferences > Accessibility > Keyboard_. In the Hardware tab, you can enable either Sticky Keys or Slow Leys or both and set their parameters. 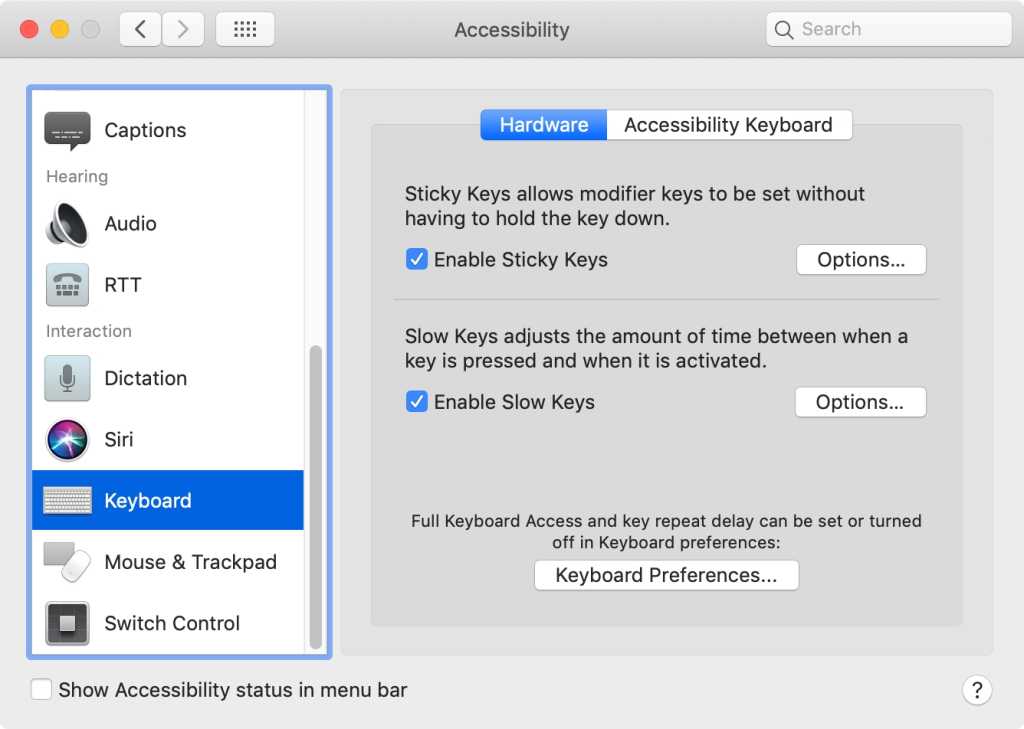 What Sticky Keys does

Sticky Keys lets you press the Shift, Command, Option, and Control keys individually and release them. They accumulate instead of having to hold them all down at once for various commands. By default, as you press these keys, they appear as light gray outlines in a dark gray lozenge in the upper-right corner of the screen. (You can change where they appear in Options.)

With Sticky Keys on, the Mac shows in the corner of the screen what keys at activated.

Each modifier key remains active unti you type a character following them. You can also lock and remove each key:

You can opt to have a sound whenever each key is pressed. And you can set a trigger of pressing Shift five times to turn Sticky Keys on and off. That can be useful in particular circumstances, when you don't want to hold down combinations in an app.

What Slow Keys does

Slow Keys affects all the characters you type on a keyboard that appear on screen in a document or entry field of any kind. It enables additional feedback and delays, particularly useful if you find that you want to spend longer holding a key down than macOS permits by default. This can also be useful for children or people with impeded finger motor flexibility who aren't used to using a computer.

With Slow Keys enabled, you can set an acceptance delay, which requires the key is held down for from the loosely defined Short to Long period. Use the slider in the Options dialog to adjust this delay until it fits your liking.

As you type, each key must be held down for that minimum period of time before macOS registers it. You will need to tweak it to find the right fit. It can help with both hunt-and-peck and touch-typing accuracy by allowing correction as you type, by releasing a key you press in error and release before it's registered.

You can adjust the delay of Slow Keys, as well as turn on click sounds.