Leave the keyboard at home

First shown at the Consumer Electronics Show in January 2010, Freescale's SABRE smartbook is a crossover system that doubles as a 7-in. tablet on the road and a small netbook with keyboard at home. 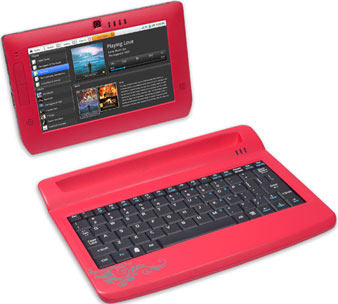 Freescale's SABRE smartbook: 7-in. tablet on the road, desktop-like netbook at home.

The key to its design is a keyboard-based docking station that charges the system's battery and connects it to local resources such as printers and external hard drives.

"Our research showed that people wanted a smaller device than a notebook but one larger than a cell phone," says Freescale's Sperle. "SABRE is that computer."

SABRE stands for stands for Smart Application Blueprint for Rapid Engineering. It's a full working system ready for manufacturing. In fact, the prototype is intended to drum up business for Freescale's components among Asian manufacturers, although no resellers have snapped up the SABRE design yet.

At 13 oz. and about the size of a small stack of 5-by-7-in. file cards, it's roughly two-thirds the size and one-third the weight of today's typical netbook. But with an ARM Cortex A8-based processor, it doesn't skimp on power. Its performance should be on a par with that of an Intel Atom N270-based netbook, but it will use less than one-tenth the power.

In addition to a battery that lasts for seven or eight hours of work, according to Sperle, SABRE offers instant-on capabilities as well as all the amenities you'd expect, such as 64GB of flash storage, USB ports and a 3-megapixel camera.

One tablet per child

While many were impressed by the ability of the One Laptop Per Child (OLPC) organization to manufacture and sell its XO educational notebook for about $200 each, its design was rather pedestrian. A follow-up fold-open tablet, the XO 2.0, never made it to production, but OLPC is now working on its successor, the XO-3.

This slate tablet design trades the traditional mechanical keyboard for a 9-in. multitouch screen -- a "single sheet of flexible plastic," according to OLPC -- for typing or writing with a stylus. The first working prototype, due in December, will have a glass screen, but the goal is for the shipping product to be 100% unbreakable plastic, according to project founder Nicholas Negroponte.

The minimalist OLPC XO-3 takes thin to a new level

Other hoped-for features include haptic feedback, a dual-mode display that can be seen both indoors and in direct sunlight, and a unique corner loop for carrying the tablet between classes.

Two concepts that never made it ...

It seems to be the routine for notebook prototypes: They're always a year or two away from commercialization, making the world of designing and building them fraught with frustration. In fact, some of the best ideas never make it out of the lab or boardroom.

Take the Pocket Yoga, which came out of Lenovo's Beijing design studio. A long, narrow netbook with a leather case, the Pocket Yoga resembles a large wallet when closed and can actually fit into a back pocket. The screen can be flipped over to turn the keyboard-centric system into a small slate. 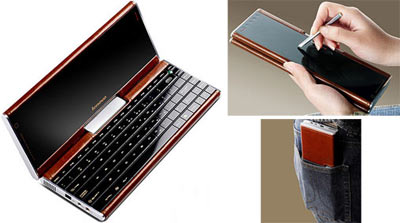 The Pocket Yoga packs a usable screen and keyboard into a netbook the size of a stenographer's pad.

The device caused quite a stir when photos of it began popping up all over the Web last year. To the disappointment of many, however, Lenovo quickly revealed that the Yoga was nothing more than a two-year-old concept design that was never intended to be produced. 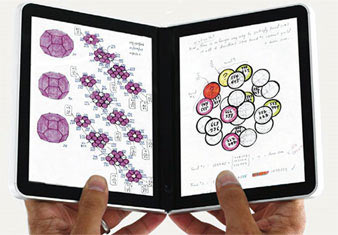 By the same token, Microsoft's innovative Courier concept will never see the inside of an electronics store. Composed of a pair of 7-in. touch-screen displays hinged together, Courier was designed for flexibility: Hold it upright, and it's a two-screen e-book reader or calendar. Turn it sideways, and it resembles a traditional notebook where one of the screens is a keyboard.

While some tech watchers had high hopes that Courier might eventually become a competitor to Apple's iPad, Microsoft recently announced that the project has been canceled. However, company officials have hinted that some of Courier's technologies are likely to show up in future Microsoft products.