Roll out the PC

I couldn't resist including a concept design that isn't quite ready for prime time: the Rolltop, a mobile computer that's unlike anything you've ever seen. According to designer Evgeny Orkin, "The idea was to make a computer that could roll up and be folded into different configurations. Flexibility is what I'm after."

While traveling, the Rolltop looks like a cylinder about the size of a roll of paper towels with a latch to keep it from unrolling en route. When it's time to get down to work or play a game, the system is rolled out like a rug, revealing a 17-in. touch-screen tablet with a pop-out stylus for writing or drawing. 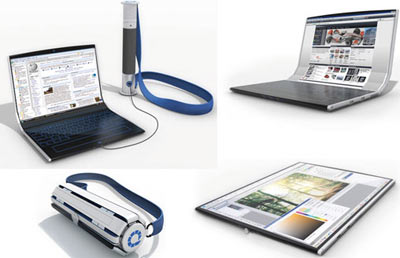 Use the Rolltop as a traditional notebook or large tablet, then roll it up to take with you.

Alternatively, the upper part of this system can be folded up to a 110-degree angle and locked into place. This transforms it into something resembling a traditional notebook with a 13-in. display on top and an on-screen keyboard below.

The secret to the Rolltop's "rollability" is that it doesn't have a rigid glass display, a solid case or a motherboard that integrates all the electronics. Rather, its flexible plastic screen has a series of narrow slats on the back. In between are narrow circuit boards that contain all the electronics. As the Rolltop is unrolled, adjacent slats snap together to create a solid surface. Orkin has created a video demonstrating how it works.

The ports, speakers and power adapter are housed in a cylinder that the whole thing is rolled onto when you're ready to hit the road. There's also a pull-out leg in the back to prop it up for use as a monitor, as well as a shoulder strap for carrying around the rolled-up computer.

"I think it will take about two years before you'll see something like this in a computer shop," says Orkin.

As innovative as the Rolltop is, it's a step or two away from actually being made. The missing element is the superflexible screen, but there's been a lot of action of late in this area -- particularly in e-readers like the upcoming Skiff Reader. 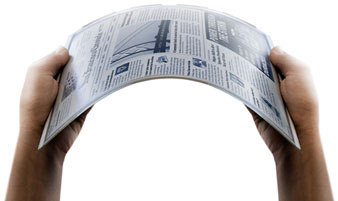 The metal foil e-paper technology behind the 11.5-in. Skiff Reader is a step toward the large, ultraflexible display required to make the Rolltop real.

Rather than a rigid frame, the screen of this e-reader uses a flexible thin stainless steel backing sheet that can be bent into a "U" without cracking or breaking.

It's a start, but it won't bend enough to be used on the Rolltop. Also, the 11.5-in. screen, made by LG Display, is a monochrome display that won't show color -- although color should arrive in a few years.

A big step forward is Sony's flexible color OLED display that is thin enough to be rolled around a rod the thickness of a pencil. So far, the biggest screen that Sony has shown is just 4.1 in. with 432 by 240 resolution, so there's some development still needed before it could be used in the Rolltop. Similarly, a highly bendable color LCD being developed by a consortium of Japanese tech companies is currently limited to cell-phone-size screens.

Sony's color OLED display can be rolled around a pencil, but it's not laptop-size yet.

Nevertheless, with ongoing advances from these and many other sources, including HP Labs and Arizona State University, PARC, E-Ink and Plastic Logic, fully flexible notebook-size displays are likely only a few years off.