Folding also dominates a futuristic ultramobile device called the Multi-Fold that is being patented by Qualcomm. The system is composed of three display panels, like a triptych that can be arranged to deliver different computing personalities.

It can be a wide-open tablet workspace, a travel-friendly notebook with an extra-tall screen or, at night, a device with one screen exposed that looks a lot like an alarm clock. No word on size or weight, but there's nothing in it that can't be made today.

The Multi-Fold can be bent into a variety of configurations.

It has one big drawback: no mechanical keyboard. Instead, one of the displays can be used as a screen-based keyboard. While this has the advantage of potentially setting up keys of exactly the size and shape you want, they lack the feedback and feel of a mechanical key moving under the pressure of a finger.

The key to computing

But what if the keyboard could be hidden and come out when needed? That's the idea behind a smartbook prototype that was designed as part of Freescale Semiconductor's SCAD Design Challenge competition. 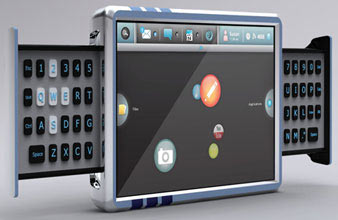 Dual pull-out screens are made for thumb typing in this Freescale/SCAD smartbook prototype.

Created in cooperation with the Savannah College of Art and Design, the prototype has a pair of pull-out keyboards that straddle the screen. You hold the device in two hands and use your thumbs to type e-mails, blog posts and quickie Twitter notes.

"It blends ideas from phones and notebooks together to create a more compelling Web experience," says Steve Sperle, head of consumer segment marketing for smartbooks at Freescale.

SCAD is a nonworking static mock-up made to test how people might react to the design, but it could be manufactured tomorrow without any new technology. With a 7-in. central screen, it won't replace a full notebook, but at only about half an inch thick, it's a go-anywhere device -- sort of like a small iPad with physical keys to type on.

"The challenge is making the keyboard thin enough without sacrificing the feel of the keys," says Sperle.

Looking like an oversized slider cell phone, Sean Bovee's Slider is a handheld computer with a 9-in. touch screen and a mechanical keyboard that slides out from underneath the screen. The display has a central pivot that rides in a recessed track down the middle of the keyboard.

"Slider was born out of frustration," explains Bovee, an independent industrial designer based in Atlanta. "Why can't we have a small machine with enough power to run the programs we want with versatility for every situation?" 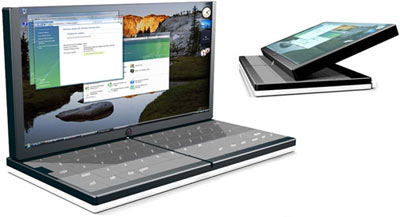 The Slider's grooved keyboard allows the screen to slide over it for tablet-style computing.

At 9.5 by 5 by 1 in., Slider is designed to be small enough for a jacket pocket or bag, but powerful enough to do what you need it to do. Not an actual cell phone, Slider is equipped with a 1.5-GHz processor that enables it to handle VoIP calls as well as high-definition streaming video and video chats on its OLED screen, according to Bovee. Slider's battery can power it for four to seven hours on a charge.

The design calls for a complete QWERTY keyboard for thumb typing or touch typing, but there's a potential snag. Some of the keys in the center of the keyboard need to be split or downsized to accommodate the track for the screen to ride on. In other words, using the 7, Y, H and B keys might be awkward.

Veeramoney and his group at Intel built a similar prototype called UrbanMax and showed it at the Intel Developer Forum in Taiwan in the fall of 2008. The big difference is that UrbanMax has a larger screen, at 11 in., making it a bit less mobile than Slider.

Intel's Mooly Eden demonstrates how the UrbanMax's keyboard slides out and the display lifts up to transform from slate tablet to notebook.

Everything needed to make Slider or UrbanMax exists today, although Bovee says that to keep it slim, Slider requires a machined aluminum case and the dividing of the system's electronics between its base and screen lid. While he declined to estimate the price, Bovee did say it would be would be more expensive than a conventional system with a plastic case.