Kyle Cherry's Prime concept takes displays a step or two further. Prime was designed to be the ultimate gaming notebook with three big screens; it can be folded up into a small and portable package for travel.

"I wanted something that could transform from small to large, depending on what you had to do," says Cherry, a Seattle-based independent industrial designer. "Prime offers the best of both worlds."

Currently nothing more than a CAD image, Prime would be made of six aluminum wings -- three with display screens, one with a mechanical keyboard, and two blank surfaces for storing electronics. Some of Prime's panels are hinged, and others can slide over each other. Like a Transformer toy, it can be formed into several different configurations, each with a distinct computing personality. 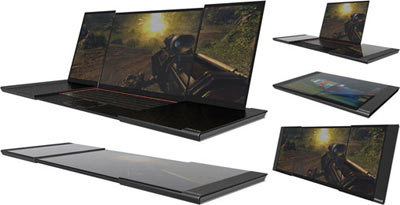 The Prime was designed with versatility in mind.

If you want a big-screen notebook, the Prime can be folded to create a 22-in. composite display with a wide and short 32:10 aspect ratio. You can also fold down the side screens and use only the 15-in. center screen that has a traditional 4:3 aspect ratio. Or rearrange the panels to create a huge touch-screen tablet with a wide-open workspace. When it's time to go, all the panels fold up to the size of a traditional 13-in. system.

The multiple screens have a downside: Wherever two screens meet, there will be a thin black strip between them for the display frames, which may be distracting. (While of course I couldn't get my hands on the Prime, I have tested a notebook with a pull-out auxiliary screen, Lenovo's ThinkPad W700ds. Initially I found the black strip between screens annoying, but I quickly got used to it and hardly noticed it.)

Inside the Prime is room for a pair of processors and the kind of graphics engine seen only on top-of-the-line mobile workstations. The Prime's aluminum skin will help dissipate the heat from its high-end hardware without burdening it with too many cooling fans.

"It'll be fairly thick but will be a monster portable workstation ready for anything," Cherry says.

At this time, no laptop manufacturers have signed up to make the Prime, but it is producible today without any technological breakthroughs. Cherry thinks the use of aluminum will keep the weight down to about 5 pounds -- quite optimistic given all the displays involved. Also optimistic is its target price: US$3,000.

In contrast, the Asus Airo Origami notebook concept is as slender as it gets. When closed, Airo Origami looks like a conventional laptop, but with a razor-sharp front edge and a triangular profile. Instead of having a hinged screen lid with a stationary keyboard below, the system has four major parts that move independently: the display, the wrist rest, the bottom corner of the base and the keyboard, which slides into position as the lid is opened.

As its name implies, folding is the key concept here. It is a marvel of packaging that looks like a mechanical ballet when the pieces are moving into place (see video). 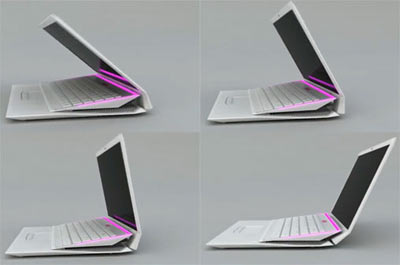 The Airo Origami's keyboard slides up into place as the lid is opened, leaving a gap underneath for ventilation.

The Airo Origami can sit like a traditional notebook with upright screen or fold flat like a tablet on a table top. Designed to encourage collaboration, two or more systems can be linked either upright or folded flat so workers can cooperate on a project face to face across a table. (Personally, I have enough trouble keeping track of what's going on with my own computer, much less having to deal with four or five PCs interacting.)

Asus made a working model of the design that was ready for production late last year but has since decided not to manufacture this unique notebook, saying that the company could deliver many of the Airo's features in its mainstream laptops at a lower price. The Asus G73Jh gaming notebook, for instance, has a similarly angled keyboard with cooling vents underneath.