Tired of the stale cookie-cutter designs that make all laptops look basically alike? You're not alone. A group of intrepid designers and engineers is doing something about the "sameness syndrome" that permeates notebook design. They're working on groundbreaking concept designs that not only turn heads but also point to new ways to work and play on the road.

Just as car shows give us a sneak peek into the next big thing in automotive technology, concept and prototype designs provide a crystal ball to see what tomorrow might have in store for mobility.

"Design concepts allow us to stretch our imaginations and ask 'what if,' " says Murali Veeramoney, head of the concept PC program at Intel's Santa Clara, Calif., headquarters. "They help us see the future of computing."

Get ready for a revolution in notebook design, including laptops with multiple screens or slide-out keyboards as well as computers that can be folded into different shapes or even rolled up when not in use. How about a laptop that can be charged without being plugged in? Even the definition of "laptop" is changing, with lines blurring among traditional notebooks, netbooks, convertible tablets, iPad-style slate tablets, smartbooks, e-readers, ultramobile PCs and other mobile Internet devices.

A couple of years back, I took a look at what kind of notebooks we might be using in the year 2015, but they required a technological breakthrough or two to become reality. In contrast, the 12 innovative notebook designs here -- some actual working computers, others wooden mockups or CAD drawings -- are for the most part producible within the next two years.

"Folding screens, wireless charging, rollup computers -- it's all coming in the next couple of years," says Leslie Fiering, a research vice president at Gartner. "Designers are getting more and more creative and innovative."

Here's a peek at the not-so-distant future.

What if your next notebook had two, three or even four displays, each capable of making your computing experience more enjoyable and efficient? That's the idea behind the Tangent Bay laptop created by Veeramoney's notebook prototype group at Intel. 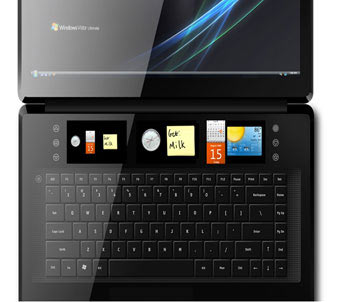 A full working computer that shows the possibility of fresh thinking on screens, the Tangent Bay has a prominent 15.6-in. main display along with three auxiliary 3.5-in. OLED touch screens, which are usually used on cell phones.

Evenly spaced just above the keyboard, these auxiliary displays can be dedicated to specific tasks so that the main screen doesn't get crowded with a plethora of panes and menus.

They're good for anything from showing a reminder note or running a live RSS feed to displaying a clock or Photoshop's brush menu. With a little programming, Veeramoney says, you could even stash your Windows 7 Gadgets there. Personally, I would use the smaller screens to monitor my e-mail and favorite Web sites without cluttering up the main screen.

"Call it extreme multitasking, but people have multiple things going on," explains Veeramoney. "If you want to bring any of them to the main screen, just flick it upwards with your finger. Touch is a very exciting concept for us."

When the Tangent Bay was introduced at last year's Intel Developer Forum in San Francisco (see video), the response was enormous. People immediately got it and saw that the multiple screens can keep several snippets of information front and center without overwhelming the user.

With an ultra-low-voltage processor inside, Tangent Bay is about as thick as a current mainstream business notebook, but slightly heavier due to the extra displays. The best part is that this system requires no new technology or engineering advances and could be made today.

"The goal of our work is commercialization," adds Veeramoney, although commercial restrictions prevent him from talking about any plans Intel might have to bring this technology to market.

Often, these prototypes are looked over by several notebook manufacturers, which take pieces and ideas and incorporate them into their wares. Tangent Bay probably won't see the light of day as a single model, but it will likely live on in several future notebooks from multiple makers.